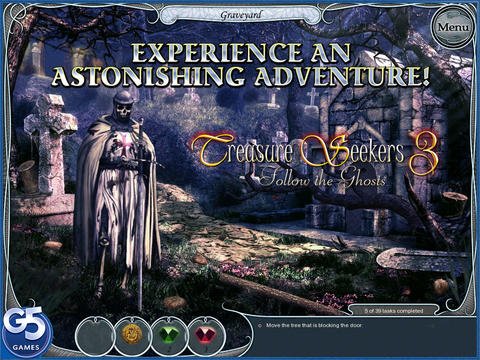 Intrepid 1930s treasure hunters Tom and Nelly return in a special collector’s edition of the popular hidden object game. As the name suggests, this is the third game for these endearing characters and while it can be played without any prior knowledge of the characters or storyline, fans of the series may find themselves at a slight advantage when it comes to certain events. However, both newcomers and old-hands alike will find a decent, if ultimately uninspiring, adventure with a twisting plotline and some testing puzzles.

The story is split into five distinct chapters, and follows our plucky young heroes as they roam the globe and investigate strange goings on. Here they are trying to find a connection between the theft of a famous jewel and a sudden spate of ghost sightings, with their travels taking them to locations as diverse as a graveyard in France where the ghost of a knight seeks his peace, and the spooky tomb of an Egyptian Pharaoh. Gameplay follows the usual pattern of the genre, alternating between the classic find-the-object sections and more traditional puzzle solving. Here however, the blend leans slightly more towards the former, with a greater emphasis on locating clues which are then used to advance the storyline.

While Treasure Seekers 3 is a solid entry in the series, it lacks that certain sparkle and innovation that could have made it something more, with several aspects that could have been improved easily enough. The storyline, while occasionally engaging, does feel very fragmented due to the episodic nature, and proves somewhat unsatisfying as a result.  A couple of rather incongruous moments also contribute to this feeling, such as when Nelly finds herself in Germany searching for the yeti, a mythical creature better known for being found (or not) in Tibet. Furthermore, each chapter follows largely the same structure, with a ghost or similar character requiring the player to collect certain objects in order to release it or set it to rest. This structure means that the story doesn’t proceed naturally, instead feeling forced, which is compounded by the ‘fetch and carry’ nature of the quests, which require a lot of going back and forth between locations. 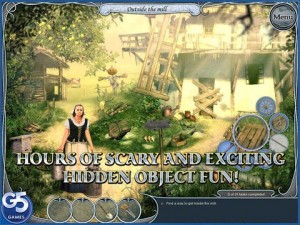 The heavier emphasis on hidden object sections also makes the game feel a touch repetitive, and a greater number of puzzles would have broken things up and helped to forge a more compelling experience. These sections also suffer from some poor or vague descriptions of objects to be found. For example, I spent some time searching for a compass, as described in-game, only to discover that I was actually looking for a pair of compasses, which as any maths teacher will tell you, is something very different. The puzzles that are present are also less than imaginative and generally revolve around similar principles, such as putting together fragmented parts of a picture. A greater problem however, is that many solutions are random, with no real logic or thought required to crack them, merely persistence or trial and error.

On the plus side, the game is certainly large enough, with five distinct chapters, each with a number of puzzles which will certainly take a fair while to complete. A bonus sixth chapter provides an extra challenge, with some particularly taxing puzzles, and which also leads nicely into the next game in the series. The environments are diverse and well realised, with a great deal of detail in both locations and characters, while the music is appropriately mysterious and haunting. As its name suggests, the Collector’s Edition reviewed here also comes with a few bonuses, including concept art and a walkthrough for those moments when you are well and truly stuck. Overall this is a sound enough game, certainly capable of keeping players entertained for a good few hours, but lacks that extra polish and spark of creativity that would make it truly stand out in a crowded genre.