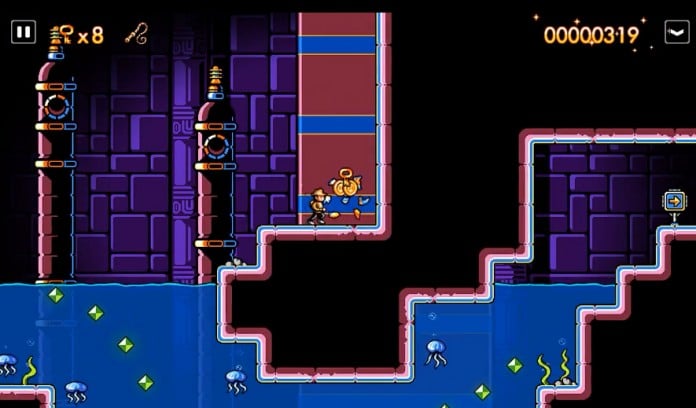 Among the many classic videogames that have been released over the years, one particular series has managed to make platform games go beyond their simple beginnings. The Metroid series, created by Nintendo, offered a gameplay experience like none other, with a huge, connected setting to explore, plenty of secrets to find and special abilities to collect, which are needed to fully explore the games’ locations. The Metroid gameplay style has later been used by some entries of the Castlevania series, thus creating the term “Metroidvania” that today defines titles with a gameplay experience inspired by these two classic series. Developing Metroidvania, however, games is no simple task, as the overall complexity of the experience requires some skilled developers who truly understand the genre.

In this regard, Traps n’ Gemstones is truly a surprising game. The title has been developed by Donut Games, a team that’s known for way more simpler games that can be played for a couple of minutes on the fly, without any sort of complexity. With Traps n’ Gemstones, the team has shown that they know how to make more complex games without completely deviating from the team’s strongest traits.

Traps n’ Gemstones is a really solid experience. The game, set in a Pyramid, stars an intrepid explorer who has to fully uncover its secrets. Just like many other Metroidvania games, Traps n’ Gemstones features plenty of items and abilities which are required to access all the locations of the game. Exploring the pyramid will not be a simple task, as several different enemies will try to put an end to the life of the explorer. Luckily, the explorer himself isn’t completely defenseless, as he can use whips and guns as weapons.

The fact that the game is a Metroidvania game from beginning to end doesn’t mean that Traps n’ Gemstones lacks personality. On the contrary, actually. Just like other Donut Games developed titles, the gameplay experience of Traps n’ Gemstones comes with a unique focus on high scores. The explorer isn’t the most resistan character ever, as he can die with a single hit. While you won’t be loosing much in terms of progress, you will be losing your chance in getting the highest score possible, as all the treasures of the game will add to your score. This adds a really unexpected twist on the gameplay experience, as there will be players who will try to complete the game with a single life in order to get the highest score possible. The game’s not so precise controls may be getting in the way of your scoring endeavors unfortunately, the only true downside of the game.

Traps n’ Gemstones is an excellent Metroidvania game that shows how Donut Games not only is able to develop more complex games, but also infuse their own personality into the game. The game is complex but it’s also easy to pick up and play, as all the other Donut Games titles, and comes with some scoring features that can turn the game almost in an arcade experience, once everything about the game has been mastered. Traps n’ Gemstones is truly one of the best Metroidvania games that I have played and one of the best iOS releases of the year.