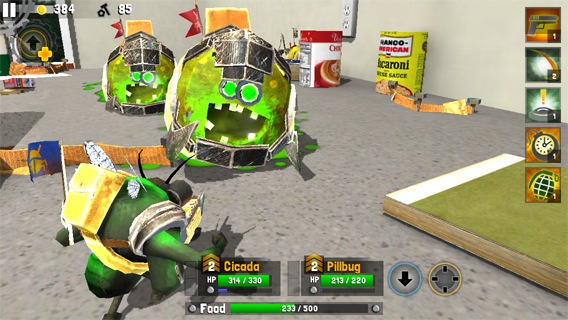 Tower defense games have managed to be quite successful on mobile devices, thanks to an easy to understand gameplay formula that’s perfect to play on the go. At the same time many of these games are hard to master, requiring gamers to think strategically in order to win.

One of tower defense games currently available on the App Store will soon receive a sequel, introducing quite a lot of new gameplay mechanics that will vastly enhance the whole experience.

Bug Heroes 2 will be an interesting combination between a third person shooter and tower defense game. Players will be able to choose two bugs from a roster of 25 characters, each one with its own unique set of abilities.

With the switch to third person view, Bug Heroes 2 will be more focused on MOBA style action rather than simple tower defense. This will definitely make the whole experience more enjoyable for gamers who like a bit of shooting action in their games.

As an added bonus, the game also looks really good, with a unique graphical style that will make it stand from the competition. If you want to see more of the game in action, you can take a look at a gameplay trailer right below.

Bug Heroes 2 will launch on the App Store on February 20th. The price of the game is not yet known but we’ll let you know as soon as something comes in on the matter.