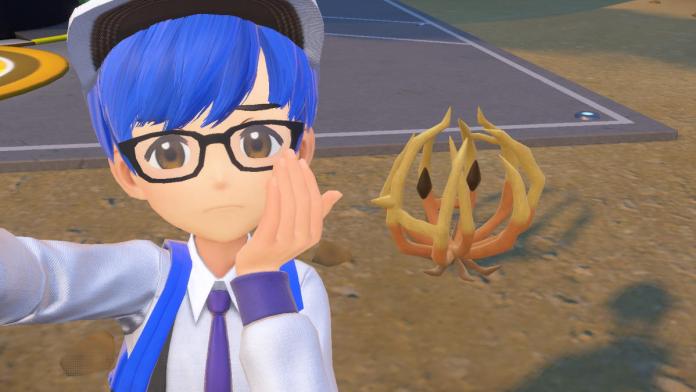 With every new Pokémon game, the roster grows larger and larger. There are a lot of fascinating new species to be found in the Paldea region of Pokémon Scarlet & Violet, but just like the other generations, there are some new Pokémon that sort of miss the mark. Today, we’ll be looking at the top seven worst Pokémon in Scarlet & Violet!

We’re humble Pokémon lovers here at Touch Tap Play, and we tend to see the positives of even the most disliked Pokémon, like Klefki and Vanillite.

With that said, there are some Pokémon designs that just leave us wanting more. The listed Pokémon below aren’t hated per se, we’re just a little disappointed with their final designs and wish they had more time to bake.

Please note that we’ll be spoiling some endgame Pokémon—you have been warned!

The idea for Bramblin and its evolved form, Brambleghast, is pretty interesting on paper. A ball of tumbleweed that is haunted? Sounds a little mundane, but it’s kind of captivating in a way. Unfortunately, the execution falls a little flat.

Bramblin’s physical appearance is literally just a tumbleweed with dark, spooky eyes. The official artwork looks pretty lackluster, but it’s even more disappointing when you see it in-game, as it looks like the eyes are just glued onto its body.

This gets a little better with Brambleghast, as the eyes have a more defined-shaped, but it still looks pretty goofy.

Flamigo is a new dual-type Flying and Fighting Pokémon introduced in Scarlet & Violet. Notice anything strange about the name? Sure sounds a lot like a plain old real-world flamingo, no?

Well, if the name didn’t fool you, Flamigo’s physical appearance won’t leave much to the imagination either. Just take a look at the thing—it’s truly just a flamingo!

They have one thing going for them, though, and that’s the rather unique Costar hidden ability. When Flamigo enters a double battle with the Costar ability, they copy their allied Pokémon’s stat changes, for better or worse.

Dunsparce, the Normal-type Pokémon introduced all the way back in Pokémon Gold & Silver, finally got a new evolution in Scarlet & Violet. Was it worth the wait? No, not really, if you can even get the form you want, that is.

What is exactly wrong with Pokémon, you ask? Well, let’s start the list. First off, Dudunsparce doesn’t look that much different from Dunsparce. It grows some extra segments, and that’s pretty much it, besides a few body shape alterations.

Second, Dudunsparce actually comes in two different forms: Two-Segment and Three-Segment forms. As the name implies, all this changes is how many body segments Dudunsparce has—it has no effect on battle stats or moves.

Now, here’s the kicker: The form you get is based on a random hidden value that cannot be seen under normal circumstances. According to Bulbapedia, the chance to get the Three-Segment form is a 1/100 chance.

At the end of the day, Dudunsparce isn’t too bad of a Pokémon, with high HP and physical Atk. Hyper Drill is a pretty good move, but we just wish that Dudunsparce’s appearance was a little more striking.

Rellor is a literal dung beetle. That’s it! Thankfully though, its evolved form is actually really neat, unlike Bramblin and Brambleghast.

Much like our inhibitions with Flamigo, there’s nothing inherently wrong with Rellor’s design, but it’s just too plain for our tastes. This might be intentional though, since we were all the more surprised when we saw its evolved form, Rabsca.

Rabsca has a lot going for it, namely its unique Bug and Psychic-typing, and its intriguing Pokédex entry. Apparently there’s an “infant” sleeping inside the ball of psychic energy, and Rabsca is very careful with it as to not disturb its rest. Talk about a creative design!

We’re not entirely sure what happened here. We thought that the whole point of the primal Paradox Pokémon was to showcase Pokémon from ancient times, but Sandy Shocks just looks like a regular Magneton got sent back in time.

The futuristic Paradox Pokémon are all cyborgs, which is cool to think about because that suggests that eventually all Pokémon became robotic in some fashion. There are already robotic Pokémon that already exist in present day, with Magneton’s family being the prime example, which is a sign of things to come.

The ancient Paradox Pokémon all have unrefined but wild designs, giving them a really cool vibe. Sandy Shock looks like a fuzzy Magneton with extended magnets, making it look pretty goofy to us.

We were also under the assumption that robotic Pokémon didn’t become a thing until later on, but we guess not. The mere existence of Sandy Shocks proves otherwise, and the in-game Pokédex entry even states that it was rumored to live for 10,000 years.

Still, just look at it. Can you imagine it walking on those leg-like magnets it’s sporting? It’s even got fuzzy little slippers on with all that wild fur. This thing’s design is all over the place.

Wo-Chien is one of the “Treasures of Ruin,” a group of legendary Pokémon that were once inanimate objects, given life through negative human emotions. As such, these Pokémon have hostile and ominous designs.

Wo-Chien, however, is probably the plainest looking of the bunch. Wo-Chien is basically a living bush, and while it does sort of exude a bit of “ancient evil,” it mostly looks like a harmless grassy snail.

Chien-Pao reminds us of classic Neopets design, Ting-Lu just looks awesome with that giant crown on its head, and Chi-Yu has that “cute but actually a psychopath” look. Everyone has a memorable design, but Wo-Chien is just kind of a… sentient shrub. Not completely terrible, just a little underwhelming.

That concludes our list of the top 7 worst Pokémon in Scarlet & Violet. What do you think? Do you actually like some of these Pokémon? What other Pokémon deserve to be on this list? Let us know in the comments below!