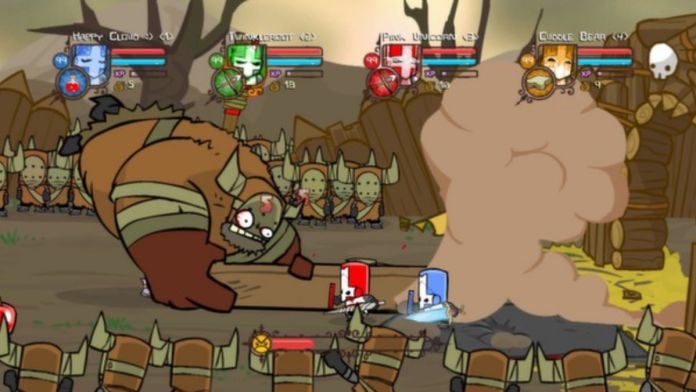 Castle Crashers is a side-scrolling beat’em’up game full of big baddies and monsters to fight. As you progress through the game, you’ll unlock new weapons, either through finding them off of slain baddies or by buying them in the various shops. With so many options, which weapons are the best? Here are the top 5 best weapons to use in Castle Crashers!

Note that most of the weapons we’ll be showing here are unlocked from the Insane Store or on Insane difficulty, which means you have to beat the game at least once to have access to these weapons.

The Chainsaw is bought from the Insane Store for 1,500 gold. It boosts your defense by 5, and it also has the highest critical chance of all weapons in the entire game, boasting a whopping 5% critical chance.

Unfortunately, because it doesn’t boost your strength at all, the effectiveness of the critical hits are not as strong as the other weapons on this list. Although, the big defense boost can help you survive the harder difficulties.

The Club is unlocked after you unlock Bear. It grants you +5 strength, +5 defense, but -3 agility, and has a 1% critical chance. This is a no-nonsense weapon that is very reliable, if you don’t mind the small agility hit.

The Man Catcher is bought from the Snow Store for 600 gold. It grants you +5 strength, +2 defense, and has a 2% critical chance. Though it only has 1% more critical chance than the Club, it’s enough to give it the advantage, as critical hits from this thing hurt.

Related | How to unlock all characters in Castle Crashers

Many players prefer the NG Golden Sword over the Club because it boosts your magic instead of defense. If you like to fire off spells often, this is a well-rounded weapon that lets you attack with anything you want.

The Gold Skull Mace is bought from the Insane Store for 900 gold. It grants you +3 strength and has a 4% critical chance.

Widely considered to be the best weapon in the game, the Gold Skull Mace boasts a high critical chance similar to the Chainsaw, but since it boosts your strength, its critical hits hurt much more.

Those are our top 5 best weapons to use in Castle Crashers. Do you think another weapon deserves to be on this list? Let us know in the comments below!

Top 5 Best Weapons To Use in Castle Crashers