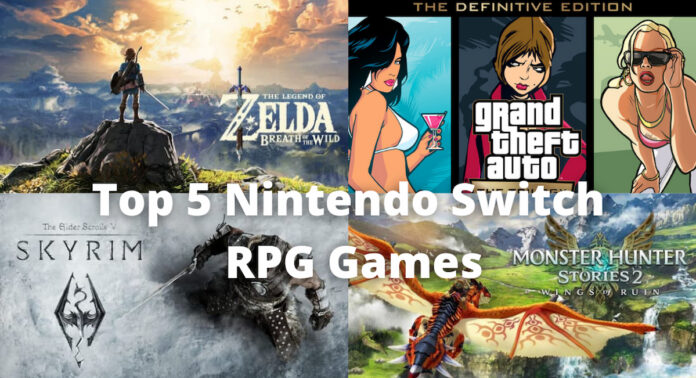 There are lots of interesting RPG titles on the Nintendo Switch that if we wanted to make a list of the best 50, it still wouldn’t suffice to list them all.

So in this article we’ve decided to cut the list down by a lot and list the best 5 RPG games on the Nintendo Switch. All the below games are available for purchase at the Nintendo store right now.

1 – The Legend of Zelda: Breath of the Wild

Taking heavy inspiration from the original 1986 The Legend of Zelda game, players finally get what they requested and it didn’t take Nintendo and Capcom very long to deliver a Legend of Zelda game that allows players to explore the world without restrictions.

Players can explore and collect different types of items and gears that’ll help them in completing missions and solving puzzles. The world that is depicted in Breath of the Wild is unstructured and beautifully designed to encourage exploration and experimentation that lets players complete the main story quests in a nonlinear fashion.

This game is easily one of the best RPG titles on Switch after receiving critical acclaim for its open-ended gameplay and brilliant attention to detail. If you love The Legend of Zelda franchise, then step into the kingdom of Hyrule and play as Link as you embark on an adventure you won’t forget.

Old but gold. Skyrim has been around for a long time but it’s no surprise how it always makes the list when compiling the best RPG on pretty much all gaming platforms. The game brings to life a whole virtual world that you can explore in any way you choose.

Players will experience new features such as motion controls, outfits, weapons and gears that if well merged, they can use to take down enemies with their Master Sword and protect themselves using the famous Hylian Shield.

The Elder Scrolls V offers an impressive freedo of choice to players and an adventure they’ll never forget as they’ll stumble upon Dragons that were lost to the passages of the Elder Scrolls, leaving the future of Skyrim hanging in the balance. As a Dragonborn, the burden of stopping the Dragons now falls on you. Can you stop them?

When we’re discussing The Witcher titles, we have mostly good things to say and ever since its release, Wild Hunt has been one of the most successful games on the Nintendo Switch console. The events of The Witcher 3 takes place in a fictional fantasy world based on Slavonic mythology.

Players take control of Geralt of Rivia, a white-haired monster slayer known as Witcher. Geralt must explore the world and search for his adopted daughter who is on the run from the otherworldly Wild Hunt. On this adventure you will encounter many dangers with weapons and magic to help you.

You can even interact with non-player characters and complete both main and side quests to get EXP and gold rewards that you can use to increase Geralt’s abilities and buy equipments. The variety of customisations and upgrades in this game gives you a sense of progression and If you love RPG games and massive open worlds, it really doesn’t get much better than The Witcher 3.

After the success of Monster Stories, a new adventure awaits you in this second installment of the highly acclaimed turn-based RPG series that’s set in the world of Monster Hunter. You play as a Rider and bond with friendly monsters known as Monsties and battle alongside them in an epic story.

After a faithful encounter with Ena, a Wyverian girl who has been entrusted with an egg that has the potential to hatch into a powerful and legendary Rathalos that could cause havoc if awakened to its devastating power.

You must embark on a journey that will test the bonds of friendship in an ever-changing world and find out the truth behind the old legends.

This Trilogy version presents players with three iconic cities: Liberty City, Vice City and San Andres and their three epic stories. The games have been updated and refined for the new generation that includes environmental upgrades, brilliant new lightings, high-resolution textures, GTA V-style controls and targeting, and many more.

The GTA Trilogy doesn’t exactly offer players with a new storyline but other than the graphical improvements that brings these three acclaimed cities to life with a new and improved level of detail, we can expect to see some surprises or unfamiliar characters.