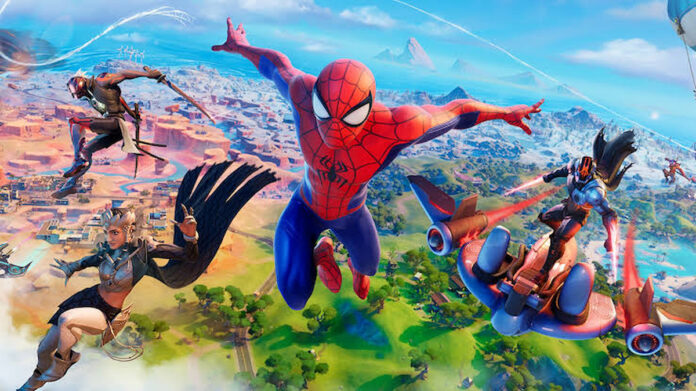 Fortnite Chapter 3 has flipped the world upside down and brought players a great mix of old and new features to play with. A Victory Royale now gets you a shining golden Llama Crown which, if you win while you have one, grants a special emote to show off to your friends and enemies. Quadcrashers are back, rifts can be found around the map, and you can still grab a car and equip it with massive Chonker tires. All in all, a pretty amazing new chapter! With new chapters and new Battle Passes, we are gifted some extra Loading Screen images for our enjoyment, and many players love to download those images for their laptop or mobile device wallpaper.

We have compiled the 5 most-downloaded wallpapers from Fortnite Chapter 3. Each wallpaper can be downloaded on the website Wallpapersden in different resolutions, via the link below each image.

This was first seen on the first page of the Chapter 3 Season 1 Battle Pass and could be unlocked for 3 Battle Stars. It is one of the favorite wallpapers from this new chapter, featuring a classic image of Ronin split with a futuristic version.

This is one of the loading screens that first appeared for Chapter 3 Season 1 of Fortnite. It shows sneak peeks of what is to come, including tornadoes, dinosaurs, Spiderman, and new locations.

3. The View From Afar

This is our personal favorite loading screen! The art style is really cool and is full of color and energy. It was first seen after the new chapter began, after the final event of Chapter 2 and the following downtime. It could be unlocked in the Battle Pass page 9 and cost 3 Battle Stars.

Chapter 3 Season 1 brought us Tom Holland’s Spiderman in the Battle Pass. This was to celebrate the new Spiderman movie, Spiderman: No Way Home, which was released in cinemas around the same time. Along with the exclusive Spiderman skin, we are also gifted some really cool fanart Loading Screens which can be downloaded as wallpapers.

Lt. John Llama has never looked so amazing! This Loading Screen is unlocked on page 3 of Chapter 3 Season 1 and costs 3 Battle Stars.

Which are your favorite wallpapers from Chapter 3? Let us know in the comments below.