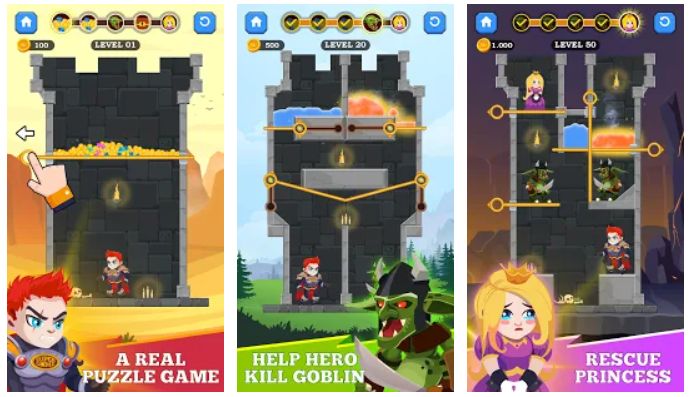 If you’re stuck or you simply want to improve your game, our top 10 Hero Rescue tips and cheats below will help you tremendously. And you can safely read them all without any spoilers: it will still be you who will be able to pass the stages, all by yourself!

Hero Rescue is an extremely good idea for a mobile game, being created based on usually false-advertising. We all know those mobile game ads where games seem to offer gameplay similar to that in Hero Rescue, but never do.

Well, this game does exactly that – and does it in style, with tons of great puzzles and game modes. We’ll talk about them all (and more) in today’s guide, so read on for some Hero Rescue tips and tricks!

In order to interact with the various items in the game – activate them or remove them, you can either tap or swipe.

For some reason, we found out that swiping is less accurate and less useful that tapping, so we highly recommend to just tap the objects you want to interact with.

This makes it easier to control the flow of the game overall and avoid losing that important half a second that is vital in some cases, where you have to move fast in order to get your sequence right.

In most cases, though, there is absolutely no hurry! There’s no rush for you to complete the level within a set period of time, so instead of trying something randomly or acting too soon, spend some time planning your moves and doing everything right from your first try.

There is no rush here and no pressure on you to complete a level (or the game itself) in a set amount of time!

3. Plan all your moves ahead

Hero Rescue is a lot like a game of chess: you need to properly plan your moves ahead and try to plan everything from the beginning to the end.

The early levels are very easy and you will cruise through them, but sooner rather than later, you will find that many levels have hidden traps or obstacles that can give you some headaches if you don’t notice them before starting to make your moves.

So in order to avoid making mistakes, losing lives and eventually failing a level, try to play all the moves in your head, from the beginning to the final move, to make sure that everything happens as it should. Even so, there will be a few cases in which it won’t happen as planned, but at least proper planning will help you a lot in most cases.

4. Usually, it’s all about timing your moves

Even though tricky, the truth is that most levels in Hero Rescue aren’t that difficult. There’s one way to complete them and doing so is usually a matter of performing all the right moves in the right order, at the right time.

If something doesn’t work right, then you have o try something different. Timing your moves flawlessly and finding that particular order is all you need to do in order to finish a level. And if you fail it, it means that you still haven’t found that correct order.

The biggest challenge will be when new elements are introduced – like in the treasure mode early on when you have to mix diamonds and stone to turn everything into diamonds in order to fill the treasure – but eventually you will figure it out and then finding the perfect sequence and timing your moves will be easy.

On other occasions, you will have to wait for a while until all elements are in place (like a goblin moving to a platform above lava) – it’s all about timing!

Here is a very important trick that will help you a lot when it comes to passing even the more difficult stages and, more importantly, avoid losing lives.

And that simple trick is to restart a level when it’s obvious that you would fail it anyway. If you restart a level before you fail it, you will not lose a life (although you will generally have to watch an ad that can be skipped after a few seconds – but there’s workaround that as well, so read on!).

In order to restart a level, simply tap the green icon in the upper right corner of the screen. You will start from scratch and with your lives intact.

This is the better option since getting a life back lasts 30 minutes, while watching that add only takes a few seconds. The better deal for sure – you just have to pay attention to what’s happening in the level and reset before it’s too late!

There are various reasons for you to watch ads willingly, and not just skip them when the game randomly throws them at you: ads can give you various boosts and bonuses that can help you progress through the game and have more fun.

For starters, each time you finish a level, you can watch an ad to double the amount of coins that you earn, but since they’re virtually useless, that would be a waste of time.

However, a more useful thing is watching lives to replenish a life: if you are not fast enough to reset before actually losing your lives and you end up without any left to keep playing, you can watch an ad for a free one. This is really useful, for sure!

You can also watch an ad to skip a level that you can’t beat, but this is something that really ruins all the fun of the game and shouldn’t be done (more on this later).

7. You don’t have to interact with all items

Some of the items that you will find in some of the levels of the game are there just for decorative purposes or, better said, to make your life more difficult.

One thing is certain though: you don’t have to interact with all items in a level in order to beat it and in some cases you actually have to ignore one or more of those items in order to complete the level.

So while you should always look at all the things that you can do in a stage, have in mind that you don’t always have to remove or swipe or interact with each and every items in that said stage.

If the 300 and growing levels of the regular campaign in Hero Rescue are not enough for you, we have some great news: the game’s developers have created four different game modes, each with tons of levels for you to beat as well.

You unlock these extra challenges by reaching a certain level in the game and once unlocked you can play them and complete the levels as you see fit.

The nice thing about these levels is that they are of a higher difficulty challenge and usually introduce or focus on a different gameplay mechanic – like filling up the Treasure Chest in the similarly named game mode, or focusing on fighting in the Sword mode.

These are great distractions from levels you can’t currently beat, and they can sometimes make our brain wheels start spinning and figure out the solution to the said levels. So definitely play these as well!

Each level in the game can be skipped if you watch a video ad. While this definitely sounds appealing in the case of the few really frustrating levels you can’t easily beat (looking at you, Hero Rescue level 140!) taking this option simply ruins the fun of the game and you achieve nothing.

You can basically go through all the levels without playing a single one, but by watching ads – but what would be the point? You’re playing the game to actively being part of the puzzle solving mechanics and, even if some missions are difficult, you should still do your best to solve them instead of just skipping them.

10. Disable ads in the game

If the in-game ads start to become annoying or distract you from the game, you can actually turn them off!

In order to do so, all you have to do is force quit the game, then disable your WiFi and/or mobile internet. Alternately, you can place your phone in airplane mode. Then restart the game and there will be no ads to bother you.

This also means that you won’t be able to take advantage of the ads for the various bonuses they offer, so we can say that you’re also upping the difficulty level a bit.

Do have in mind that it is actually these ads that reward the developers for the game they have created and help put food on the table and disabling them will prevent them from earning any money from their hard work.

So only use this as a last resort type of thing and try to keep ads on for as much as possible – it’s your way to saying thanks to the developers of the game and rewarding them for creating a game you enjoy playing.

These would be our tips and tricks to help you beat Hero Rescue, complete all the levels on your own and have a ton of fun. This is a great game that I am sure you will enjoy greatly – and if you have additional tips for playing it better, let us all know by commenting below.