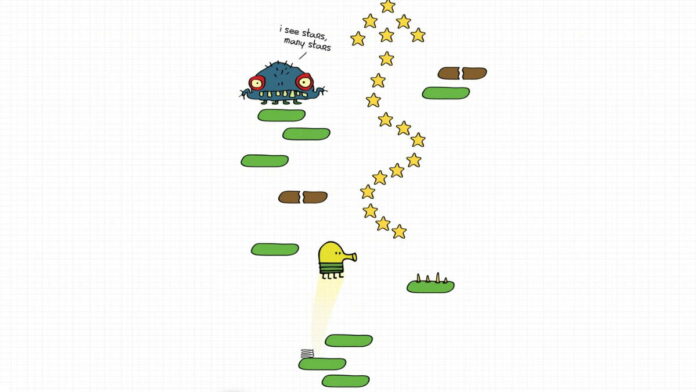 The early years of the App Store was a lot like the wild west – all sorts of games were coming out, no one really knew what stuck and what was popular with players, and there were no set expectations for any kind of genre.

Then, one day, a silly little jumping game starring a funny looking alien came out. Doodle Jump graced the App Store on March 15, 2009, and it arguably set the standard for what casual on-the-go games could achieve in terms of fun and value.

The game was an instant hit and was ported to many different platforms, including consoles and handheld platforms. Then, seemingly out of nowhere, Doodle Jump 2 graces the App Store!

Doodle Jump 2 contains all the doodling fun that the original game had plus new worlds, new monsters to bash, and of course plenty of new platforms to jump on. The premise remains unchanged – bounce your way up to the top of the world and see how far you can get!

This time around, players will get to jump around in new themed worlds including a prehistoric world full of giant dinosaurs, a sleepy world with bouncing sheep and pillow monsters, and even a disco world where you can get your groove on while you bounce!

Doodle Jump 2 is available now on the iOS App Store as a free download. We can only assume that the game will eventually be ported to Android and other platforms in the future.

The Long Awaited Sequel to Doodle Jump is Finally on iOS