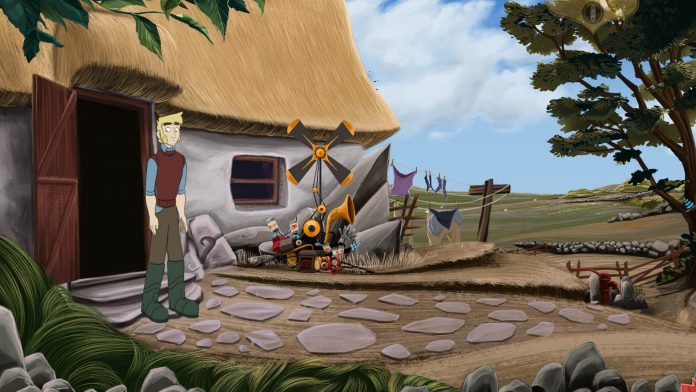 The second you start up The Little Acre, you’re treated to a lovely little cottage in the middle of a quaint field. Then all of a sudden a giant beam of light erupts from the cottage and shoots into the sky. I knew I was going to be in for a treat just from that opening alone.

The Little Acre starts off with a mostly silent intro – a stout, middle aged man and an nimble woman are exploring a mysterious yet beautiful land. Things get out of hand once they anger a local creature of some sort, and as they’re escaping the man stays behind to fend off the creature while the woman jumps through a magical portal. The man’s fate is left unknown, but the woman seems to have come to the worse conclusion. 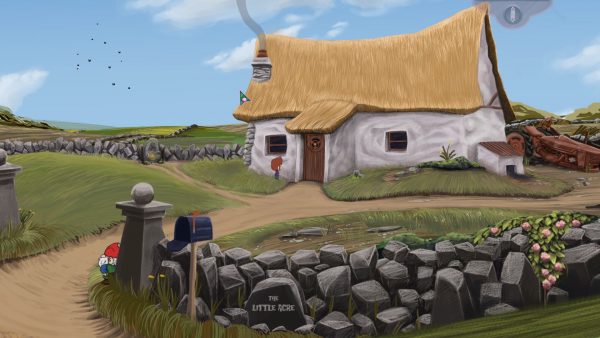 And with that, The Little Acre starts proper after a jump to the present day. You play as Aiden, a bright young man. The first thing you’ll probably notice about The Little Acre is that it’s just absolutely beautiful to look at. The hand-drawn backgrounds are a treat in and of themselves, but the real icing on the cake are the characters. Aiden and Lily, even if they’re doing mundane things like simply walking from one end of the screen to the other, are animated with such personality and charm that it’s hard not to smile when you’re playing this game.

The lighthearted and whimsical tone of the game is set in stone as you’re presented with the very first puzzle of the game: getting out of bed without waking up Lily, Aiden’s hyperactive daughter. The game plays out like a standard point’n’click adventure game, and you’ll need to make clever use of the family dog Dougal to sneak out of bed. It also sets the general difficulty of the puzzles as well; there aren’t any do-or-die moments in The Little Acre, and there certainly aren’t any puzzles that will hopelessly confuse you. The puzzles are pretty straight forward and even in the unlikely event you get stuck, there’s a hint option that provides you with clues. 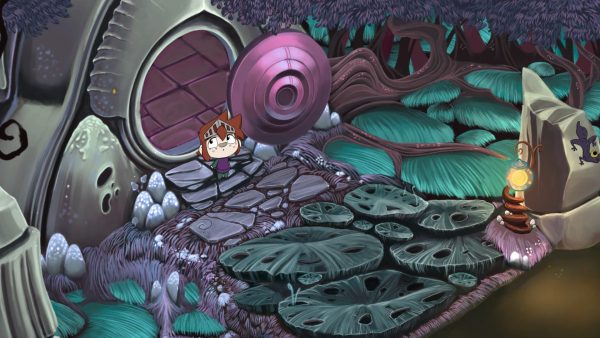 After some snooping around, we learn that the man from the intro was Aiden’s dad. He’s been missing since that incident, and now it’s up to Aiden to discover the truth. From this point on I started to feel like the story was getting rushed; the flow of The Little Acre has no brakes! The story is told through the eyes of both Aiden and Lily, and you’ll be jumping back between them when the game calls for it. It happens so frequently that it’s a little jarring at times. It’s still a pleasant experience overall, but I couldn’t shake the feeling that there was supposed to be more to this tale.

How quick the end came only furthers my suspicions. The Little Acre will take you probably an hour or so to playthrough completely. The game is very short, and a lot of plot details will get glossed over. I love the characters in the game and I wish we got to see more of them, but the main plot wraps up so fast that it’s over before you know it. Thankfully though because there’s still a lot of room for world building, that leaves room for a possible sequel. 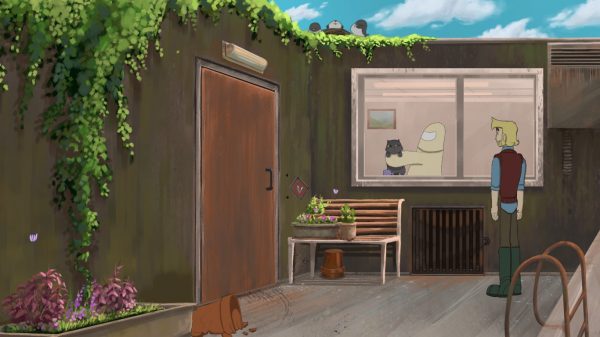 Don’t get me wrong – The Little Acre is a fantastic little adventure game with a wonderful art style and lovable characters. The dialogue and voice acting are all top-notch, and the music is great as well. The puzzles are easy enough that anyone can get into the game. It suffers from some pacing issues but everything will be forgiven if that means we get another game in this universe!