It seems that it’s that time of the year where Life Simulator games are extremely popular and everything started with the beautiful BitLife – Life Simulator. But now we have another really great game (and extremely challenging too), simply called The Life Simulator – and we’re here to share cheats and tips for it in our complete strategy guide.

This game shows no mercy. Extremely difficult to win, it gives you a limited amount of scenarios, but you will surely need a lot of time to ace them all.

But we’re here to help you win the game created by Mind Vacation and I am sure you’ll have a ton of fun, just like we did. Yes, and a bit of frustration, because you can’t have a solid life sim without that.

So, without further ado, let’s check out below some The Life Simulator tips and tricks for the mobile game by Mind Vacation!

Scenarios set the difficulty level
There are seven scenarios currently available in the game and they are basically different difficulties for the game.

Neither gives you an easy stroll through life though and you’ll have a challenge with each scenario type that you play.

Read the description in order to anticipate how difficult it will be to play that life (hint: it will be very difficult no matter what you choose). Probably the easiest scenario is the High School Dropout – you start the game with some money, you have middle school education and a full life ahead of you.

Everything else is really challenging, except for maybe the Old Man scenario which gives you a bit of everything (except for a long life). Try these two first in order to get acquainted to the game’s mechanics and try the more difficult ones afterwards.

The first scenario I played in was the College Dropout and got the Burger Flipper job where I was supposed to earn $250 per month. However, I was only getting $225 from the beginning.

I restarted the game, considering that was a bug and went for the “Educated and in debt” scenario, where I instantly became a Data Entry Clerk for a salary of $400 per week. But I only earned $200 each time I worked. I was really angry because of this bug.

But I realized it’s not a bug. You have life expenses each week and they are listed in the bottom right of the screen.

That’s probably the most important area to look at, since you get an overview of your expenses each week and you can better plan your life. Everything influences the cost of living, making the game insanely difficult – so keep an eye on your weekly cash flow! 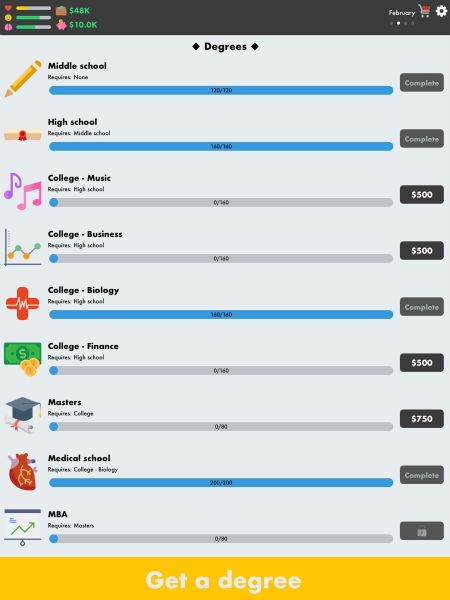 Move into the Small Apartment ASAP
If you’re playing a scenario where you don’t already have a decent house (and usually you won’t), try to move in the small apartment ASAP.

That is the first housing option that doesn’t affect your stats negatively and at $180 per week is relatively affordable.

However, you will need to put aside a lot of money in order to afford it. But even if you don’t plan out things too well, it’s still worthwhile because you can switch to something cheaper without any penalty.

Find the perfect Work – School Balance
In most scenarios, this is the most important thing: balancing study with work, in order to be able to get a better paying job.

First, look at the jobs available and the requirements to get one. In most cases, you will be able to progress in your career after completing the number of weeks indicated under the job, so salaries will get better… but not fast.

The best basic job in my opinion is the Trainee (which requires you to study Biology) – and I say that because it doesn’t negatively affect your stats like the other jobs in the same pay range do. Being an Uber driver seems like a solid option too… but I guess that by the time you have the money to afford a car, you’ll probably be able to get a better paying job also.

But the point is that you should get the best paying job ASAP and work hard. Don’t pull Overtime or All nighters unless your mood is really good… it will probably cost you more to replenish it than the earnings you’ll get as a bonus (at least on lower income jobs) 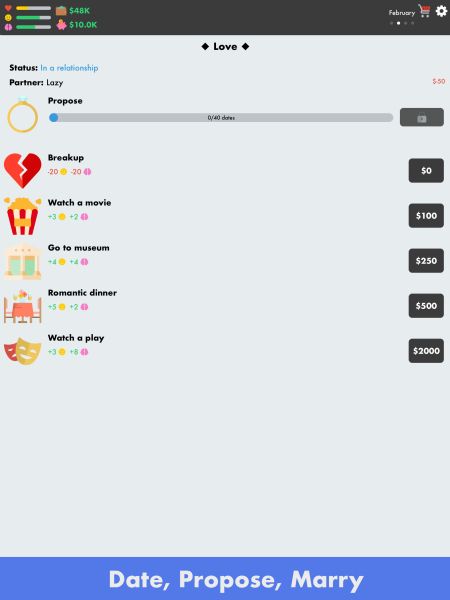 Develop your skills sooner rather than later
Apart from the studies, there’s something else to complicate things a bit: Skills. These are similar to studies, but very expensive.

Each skill unlocks a special trait or gives you a bonus – for example, the Hygiene Expert sees your character get sick less often, while the Home Chef gives you better food options.

Again, you will have to prioritize here based on your character and take things one at a time (but most likely after completing your studies). I personally believe that Home Chef and Personal Finance are the best two skills to invest in early on, followed by Hygiene Expert, Meditation Expert and Stoicism.

Free Leisure is great leisure
Leisure is what usually keeps you in a good mood and mentally strong. Fortunately, you have a free option here – take the week off, which gives you a really nice boost. That is what you should focus on for a while, because the $25 option that’s immediately available afterwards doesn’t really offer a huge bonus for the money.

It’s strange, actually, to see that the more expensive options don’t give you a bigger boost per dollar spent.

Although it would seem better to go with the cheaper options, the biggest win that you get from the pricier ones is that you don’t have to waste that much time performing that action. But I still consider the costs prohibitive, at least early on in the game…

Being in a relationship is EXPENSIVE
As if we didn’t have too many expensive things ALREADY in the game… relationships come to show us that either life is really tough or there are some balancing issues that have to be dealt with in The Life Simulator.

Being in a relationship is extremely expensive, as there are tons of ways for you to spend money (and you have to if you want to progress in that relationship). The good news is that you get some bonuses from being in one, so it’s not just money wasted. Although the boosts are too expensive imho.

Always keep an eye on your stats
All that matters is shown in the top left corner: your stats, your money and your debt. That’s where you should always look and try to improve what goes into the red because if you spend too much time with any of your three stats on the red, it’s game over.

And this will happen a lot more often than you’d like to, especially during your first playthroughs because micromanaging everything is really difficult.

Win the lottery!
Like all life simulation games out there, The Life Simulator gives you the option to play the lottery and potentially win huge earnings.

I never managed to get that done and ended up wasting money, although I did win a small prize every now and then. But at $10 per ticket, with how expensive things are in the game… even a lottery ticket sounds like a luxury item.

But once you can afford it, get one or two tickets every now and then… who knows? Maybe you’ll strike lucky once and end up your life of mysery!

This would be our guide for The Life Simulator. It’s definitely the most challenging game that we have played in this genre and that’s mostly because of the scenarios.

If you have additional tips and advice for fellow players, don’t hesitate to comment below. If you have any questions, do the same!