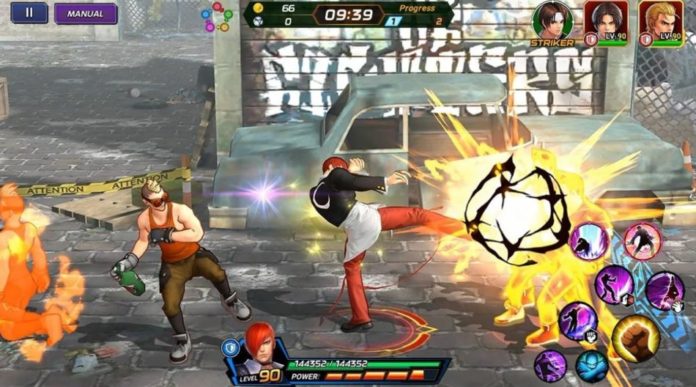 In today’s article we are going to cover all of the King of Fighters Allstar tips and cheats that we have gathered so far and share them with you, so that you can learn everything there is to know about fighting and how to win all of the battles!

If you are familiar with this type of games, then you might be as thrilled as I was to see an actually very good game come to the mobile devices! So since there are quite a few things to cover regarding this game, you came to the right place to learn all that there is to know about the game.

So let’s not waste another second and dive right into The King of Fighters Allstar tips and tricks right here below and learn how to form a powerful team to win all battles!

Play the Story Mode and advance as much as you can

To be on the right track of acquiring a good team, you should start by playing the story mode, which is in the Battle button -> Story. There, you will be introduced to the lore of the game and you will be able to fight in the various series available in the game (the series that are just like the original game’s series pretty much).

I suggest that you start with the very beginning and play as much as you can, preferably up to Chapter 8, because then you will unlock more features.

If you don’t want to do this, and you came here for the PvP only, then you can do that too, but in my opinion it is better to just do the Story mode so that you can level up and unlock a few more features. After all, PvP is not even available right off the bat!

Learn how to attack properly & choose your style

This is something that you might not know existed at start, but if you are a long time player of the game, you will probably know that there are different ways that you can choose to fight and select your controls.

To select the type of controls that you want, you can head on to the Settings button -> Battle tab and there you will see three types under the Control Type: A Type, B Type and C Type. Let’s see how they differ from each other:

– This type of control is the one that the game is set by default on and with this, you will attack the enemies only if you press on the Attack button.

– This control type is the one where you will attack the enemies whenever you touch the screen, and it will not have an Attack button (since there is no need, after all you attack whenever you tap the screen).

– This type of control is one which combines the two – basically you will attack by pressing the Attack button, but also whenever you tap the screen. It’s slightly easier in my opinion since it has both of the options.

You should try and play with all of them, so you can figure out which one is the best for you, because that one will be the most enjoyable to play as. Once you did that, make sure that you have the Set Auto Target on ON because that will make things much easier.

My tip here: Use the normal attack 4 times, because it will perform a combo attack. It’s good, has no cooldown, so try it out after you’ve chosen your preferred type of Control.

Clear your missions and get extra rewards

If you want to collect a ton of Rubies, but still want to keep it f2p, then try to focus on playing the Story Mode and complete as many extra missions as you can, because those will reward you with plenty of Rubies!

The extra rewards are given by meeting all the requirements at the end of the battle, and while you are in the character selection window (right before you start the battle) you will see them on your right. They will be anything between Clear within 180 seconds, Clear with all fighters alive and other such (fairly) easy tasks.

Try to keep them in mind and fight the best that you can while following them, because that way you will receive a lot more Rubies at the end of the battle! That will help with summoning new heroes!

Obviously, while you are fighting at the very beginning it might be way easier to use Auto play, because then your character will automatically cast the skills and fight the enemies.

Auto: In the auto mode your heroes will automatically cast the skills and attack and you will not have to do anything.

Semi-auto: In the semi-auto mode your heroes will only use the normal attack, so if you want them to use the special attacks, then you will have to cast them yourself.

Manual: In the manual mode you will have to move and attack (normal attacks and special attacks) yourself, as your character will not do anything at all on its own.

I suggest that you try them all and depending on the situation and point in the game, you use them all – for instance, I like to fight the boss battles on Manual or Semi-auto, the normal easy missions on Auto and everything that has to do with PvP or other more challenging instances, on Manual so I can select when my hero will do what.

Check out all of your missions and do them daily

There are several types of missions in game, and you can find them all by selecting the list icon next to your mailbox in the upper right corner of the screen. There, you will find the following:

– Achievements: These will give out better rewards than the Daily Missions, so check them out and see what are the requirements for completing them. The Achievements don’t have to be completed immediately, as they are not such easy missions, but whenever you see the opportunity to work towards completing a new one, do it (such as the Collect 20 Fighters one).

– Event: The events are limited time missions, and you can see how much time you have left to complete them. Try to do them within this time limit, because they will come with plenty of useful rewards. So whenever there is an event, check it out!

Try to do all these missions whenever you can, especially the Daily Missions because they will give you plenty of loot which will help you get stronger in the game.

Every single day that you will log in to the game you will be able to collect some useful rewards which will help you all throughout the game! I suggest that even if you don’t plan on playing a particular day, you still log in to claim the rewards, especially because on the 7th day you will get 300 Rubies (+100 more from another log in event)!

So try to do this even if you don’t want to play that particular day, because the rewards will pile up and when you do decide to play, you will get quite a lot of useful rewards to play with and make upgrades!

Check your Codex and get Codex rewards

You can find your Codex by heading on to the menu on the right side of your Mailbox, and there you will see a dark blue icon named Codex. There, you can find in the Fighter Codex all of your fighters and for each new fighter that you have acquired, you will see a small red dot next to their icon.

Tap on a fighter which has that, and the very first time you recruit it, you can get under the Growth tab the reward! Do this for every single fighter that you unlock, and also when you obtain all of the fighters in the Original Team.

Just make sure that you check these options often because you might already have the fighters and you didn’t know there was a reward to claim for having all of the ones in the same team!

You can choose to upgrade your fighters by heading on to the Fighter menu, and there you will see the fighters that you currently have. Select the one yo want to upgrade, and then go to the Level Up option in the left side of the screen. There, you can choose to give EXP potions to level them up, and that will make them stronger.

You should also start unlocking Cores for the fighters which you are using the most (and the ones which you will use in the future) because those will also add extra stats to the fighters and make them so much better!

You can summon more fighters by heading on to the Summon menu. There, you can choose to summon once the Fighter Summon for free every single day, so make sure that you do it because you never know what you might summon – it could be something really good!

But thus being said, you should make sure that you do your Step Up Summon until it is still available, because from that you will be able to get Kyo ’95 or K’ ’99. Those are super good, so play and save up some Rubies for this!

Afterwards, you can try to do the Infinite Fighter Reset Summon, where you can reset your summons until you get something that you like. This can be done as many times as you want until you acquired the heroes that you liked (Chizuru Kagara ’96 is super good).

So try to play as much as you can to be able to summon more fighters and put together a very powerful team!

Use the elements to your advantage

There are quite a few elements in the game, and if you want to learn how to better use them, let me explain a little:

– Red is strong against Green, but weak against Blue

– Green is strong against Yellow, but weak against Red

– Yellow is strong against Purple, but weak against Green

– Purple is strong against Blue, but weak against Yellow

– Blue is strong against Red, but weak against Purple

Always try to use the fighter that has the element which is the strongest, because that way you will always have the upper hand in battles!

These would be all of our The King of Fighters Allstar tips and tricks that we have for you right now! Do you know some more useful battle tips and strategies? Share them with us and the other players down in the comments section below!

The King of Fighters Allstar Cheats: Tips & Guide to Win All Battles