Home News The Battle Cats Is Getting a Massive Lunar New Year Event, with... 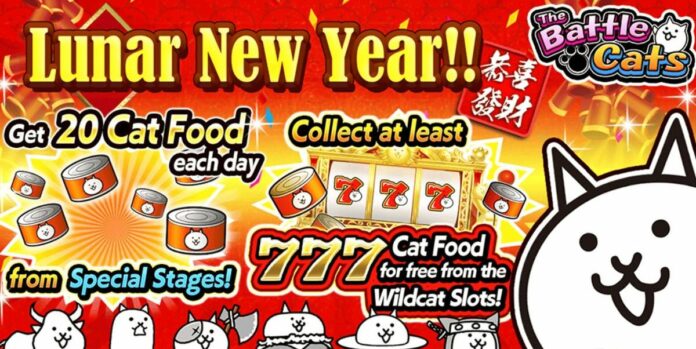 This article is sponsored by The Battle Cats.

The Battle Cats, the international megahit from independent Japanese studio PONOS Corporation, is celebrating the 2022 Lunar New Year with a range of events and stages.

Between January the 17th and February the 14th you’ll be able to win a metric ton of Cat Food, the game’s main currency, to spend on recruiting new cats and buying in-game items.

In case you’re somehow not aware of it, The Battle Cats is a casual tower defense game in which the goal is to recruit a bizarre assortment of 2D cats and assemble them into an unstoppable feline army.

Despite its quirky and ultra-casual presentation, The Battle Cats boasts a respectable degree of tactical depth. Each cat has its own unique abilities, and they’re all upgradeable, giving you plenty of scope to choose a strategic direction that suits your playing style and the challenges ahead of you.

More than 65 million players have downloaded The Battle Cats already, and 450,000 of them have left reviews on Google Play and the App Store, awarding the game an impressive average of 4.5 stars.

If you’re not already playing it, you should be, and this is the best possible time to start. Throughout the Lunar New Year event you’ll be able to rake in tons of free Cat Food from a range of sources.

You’ll earn Cat Food just by logging in every day, and then you’ll earn some more by claiming your free spin at the Wildcat Slots, which has a massive 777 jackpot.

Even more Cat Food is available if you complete a daily mission on the limited-time Lunar New Year Map, and PONOS Corporation is giving away yet more through the contest on the The Battle Cats Facebook page.

Plus, your newfound Cat Food riches will go even further thanks to the special Lunar New Year sale. Your first 11-Capsule draw at the Rare Cat Capsule Machine is half-price, letting you get your army off to the best possible start.

To begin your The Battle Cats journey, head to the Google Play Store or the App Store and start downloading.

The Battle Cats Is Getting a Massive Lunar New Year Event, with Tons of Cat Food up for Grabs