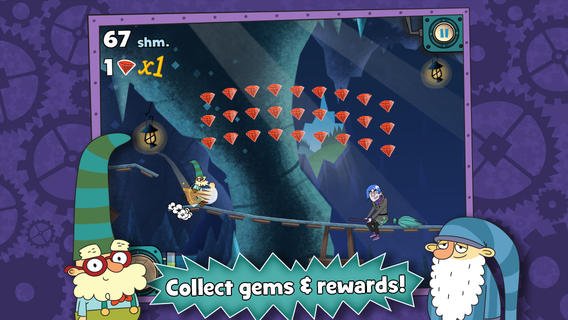 Disney is launching a new cartoon this month on Disney XD called “The 7D”. It follows the wacky adventures of the seven dwarves, and with the Mine Train you get to join in on the fun! Guide your favorite dwarf through the perilous jewel mine while grabbing all of the shiny gems along the way. With help from The 7D Mine Train cheats, tips & tricks strategy guide, you’ll be swimming in a sea of gems in no time!

It’s time to launch into this high speed hilarious adventure with the seven dwarves, so now we’re going to share some 7D Mine Train cheats, tips, and tricks to help you earn tons of gems!

At the time of writing this article, there are only three dwarves available for selection currently: Sleepy, Sneezy, and Happy. The next dwarf will unlock on June 26th. Each dwarf has their own special ability that can really help you out!

All three dwarves’ abilities are useful but I think the most useful one – at least for collecting gems – is Happy’s.

The missions are worth a lot of gems, so be sure to check and complete them as you play. For example, the very first one that requires to collect a certain amount of gems nets you 800 gems! So, don’t ignore them.

When you reach a certain speed, your dwarf’s mine cart will gain a white glow and they’ll leave behind a trail. You’re going to want to stay in this state as long as possible, because you have a couple of bonuses when you’re going fast.

Basically you want go fast most of the time, so be sure to position your cart appropriately. Jump over small bumps, avoid going uphill, and stay on downhill slopes as long as you can to build momentum. Bounce off of chests and enemies to maintain speed.

Keep a second dwarf with you at all times!

If you’re controlling only one dwarf, sometimes a second dwarf with appear somewhere on the track. Make sure to grab them, as they act as an extra life. If your current dwarf crashes or falls off the track, you will automatically switch to the secondary dwarf. This can be a life saver, so be on the lookout for more dwarves.

Buy some gadgets and powerups!

In the shop you can buy some gadgets that will give your mine cart additional abilities. The ones I recommend are:

Generally though all of the gadgets are useful in some way, so feel free to experiment and find out which one works best for you. The other section of the shop sells consumable one time use power ups.

The only one I can recommend is Double Gems, as everything else isn’t really too useful.

Occasionally a blue diamond with a white trail will spawn above the track. Try your best to grab it because they’re worth a sweet 30 gems!

That’s about it for now. More dwarves are on the way so check back to see which one you’ll be able to play with next. Got any questions or suggestions? Leave a comment below! For now, get to the mines and grab all the gems!