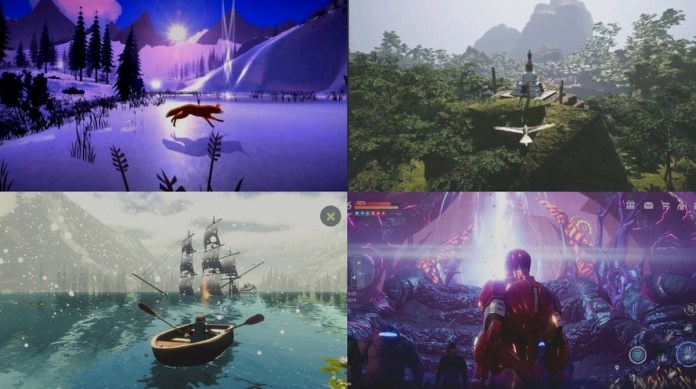 If there’s one genre of gaming that never seems to bore players, it’s Open World. We all love open world games because it’s all about freedom of movement and having the opportunity to create your own adventure in the given environment.

Creating this vast digital world that players can explore as they like often requires a lot of resources. So in this article we’ll be listing the best open world games on Android and amongst them will be some paid games as well.

This is an open world animal simulation game that has two different layers of meaning. First, you play the role of a mother fox deep in the mountains of Alaska who lost her cubs. And now after waking up to the sudden disappearance of her little cubs, she embarks on a quest to find them.

The fox’s journey however, is just the tip of the story. You’ll also stumble into the memory of a man called Joseph through the stories he’s narrating to his wife. While controlling the fox as she tries to locate her kids, Joseph’s voice speaks in the background as he tells his wife the story of that same fox.

The First Tree is available at the Google Play

This is a beautiful 3D open world game that lets you transform into a crow and explore the wilderness from the skies. There’s no need to worry about hunters, predators, etc as there are no enemies or deaths in this game. Just the freedom to fly and explore natural and real life environments and enjoy their views.

You can also shape-change and turn into a monk and explore the wilderness on foot if you want. There are lots of interesting places to explore both above as a bird and below as a monk.

Flight is available at the Google Play

This is an interesting game that you can play offline as one of the few remaining survivors of a zombie apocalypse. Fortunately your character has good military background and is well suited to battle against the undead and other surviving members of the military.

While the game provides you with your main missions, you can still explore the environments and access all sorts of buildings. Unlike the majority of open world games, The Dead Inside stands out by offering a unique gameplay, totally offline, and good story.

The Dead Inside is available at the Google Play

This is an exciting 3D MMORPG that’s set in a beautiful fantasy world similar to that of The Legend of Zelda. The game allows you to explore the environments however you want and also interact with tons of characters. You can also collect various resources and battle monsters in real-time.

You can start playing by choosing from four characters: Warrior, Explorer, Dancer and Maige. The game also lets you customise your character down to the tiniest detail such as modifying eye colour, eye brows, nose shape and many more.

Dawn of Isles is available at the Google Play

Genshin Impact is a highly acclaimed open world game that offers 3D detail and an incredibly massive map for players to explore. The game also offers tons of customizations in an expansive world that’s filled lots of surprises from playing with friends in PvP and completing the game’s story missions.

The best thing about the game is that it delivered on every aspect it promised and more. The storyline is great, there are beautifully designed locations to explore, the game’s overall graphics is superb thanks to Unreal Engine.

If you’re a huge fan of games such as Stardew Valley or Animal Crossing then you’re going to find this game to be quite entertaining. My Time at Portia is a farming simulation game that offers so much more than planting and harvesting crops. It has tons of really cool features and even some RPG mechanics.

We could even say the gameplay is quite similar to The Sims but with varying degree of difference. In this game you find and gather resource and then combine them to create different things. It also includes dungeons that allows you fight enemies.

If you’re a fan of Rockstar’s hugely successful and popular GTA series, then you’re going to love Grand Criminal Online as it offers similar GTA gameplay. The game allows you join gangs, steal cars, shoot pedestrians and battle it out with other people.

The game also features multiplayer that allows you to play with your friends. There are also tons of exotic vehicles you can drive as well as many weapons to use. Overall, this is a great GTA V alternative on Android devices.

Grab it from the Google Play

This is an exciting free-roam, sandbox, and stunting game that contains lots of stuff to play around with and various mini games that you can try. There are lots of locations in the game as well such as The Moon, the dessert and the Arctic.

The game can be played both online and offline but if you want to get the full experience and play with other players, then you should probably play it online. This is a game that’ll keep you busy alone or with friends.

Marvel Future Revolution is a thrilling new action-adventure game from Netmarble that lets you take control of some of Earth’s mightiest heroes and defend the universe from cosmic threats by going head to head with villains like Ultron, Thanos and the Red Skull.

The game allows you control the likes of Iron Man, Spider-Man, Storm and Dr Strange in a vast open world setting that you can explore with these characters for the first time on mobile devices. NPCs include Thor, Rocket Raccoon and others.

If you’ve played Nimian Legends, then you’ll enjoy Wilderless as well. In this game there are no enemies, no missions, no natural dangers of any kind, just you and your will to explore the vast open world either as a Man, Wolf, Horse, Polar Bear, or soar the skies as a Falcon.

The game also allows various customizations and modes. You can light up a campfire, build a shelter against rainstorms, go ice skating, boat riding, watch the sun rise and many more. There’s simply no end to what you can do and explore in Wilderless.