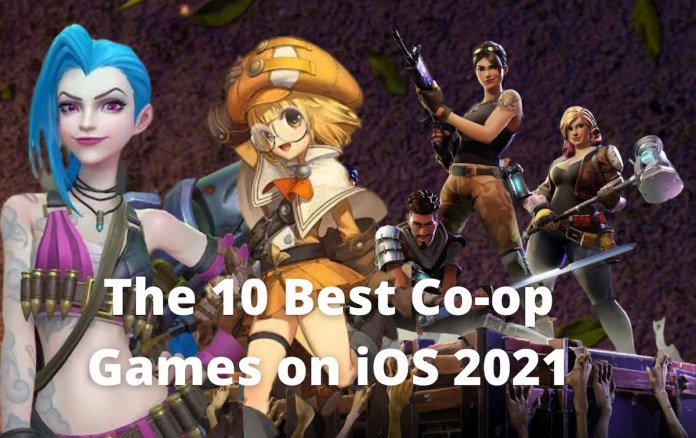 Playing games is a lot of fun, but what’s more fun is when you play with friends in co-operative multiplayer. These sort of games usually involves you teaming up with other players and strategies on how to complete a certain mission or defeat a particular boss.

So if you usually like to play games alone, we’re pretty sure that some of the games on our list will excite you to give co-op a try. So here are the 10 best Co-op multiplayer games that you can enjoy with friends in 2021 and on iOS.

After the success of Original Sin 1, Divinity is back with a second installment that allows you create a hero and change the world. You can discover how the world around you reacts to different kind of animals and creatures in this stunning open world game.

You can put together a party and development long lasting relationships amongst your companions, battle opponents in challenging tactical turn-based combat and use many aspects of the environment as a weapon such as manipulating the elements to win a fight.

Guardian Chronicle is an exciting game where you must defend yourself from hordes of monster attacks by placing a certain number of Guardians into the battlefield. You’ll have to be creative and come up with various battle strategies to survive.

Depending on the combination of Guardians you’re using, each of them possesses a unique skill that they can use to deal high damage attacks against enemies. You become victorious if you can defeat the monsters before your opponent.

After encountering the mythical power of the fragments that holds the balance between heaven and Earth, the Myriad creatures inherited unprecedented powers which corrupted them and filled their hearts with darkness and and turned them into terrifying monsters.

It is now up to you, a master, and your three disciples to accept the Guan Yin’s decree and embark on a quest to reunite the fragments and save the universe. The game has an interesting story and offers up to ten different gameplay elements and allows you switch between master and disciples.

After it was highly anticipated to launch in 2020, League of Legends: Wild Rift has finally arrived mobile as a fast-paced PVP action strategy game that’s inspired by the original League of legends PC game.

The mobile version features the same skill-based 5v5 PVP gameplay where you can battle against other players as a team and amass enough territory points to emerge as winner. There are tons of characters in this game from the popular League of Champions and you can team up with friends using them and destroy your opponents.

Rec Room is an addictive game that takes you into an online universe with an almost endless possibilities. You can create a private room with your friends and engage in all sorts of various activities in this game. And you can also join public rooms and have fun with total strangers.

The social experience lets you do tons of activities with friends such as team up and create something unique and publish it for the community to gaze upon, hang out in private rooms where you can play numerous games and even enjoy a battle royale mode with your friends called Rec Royale.

Chronos Dungeon is a whole new chapter in the Oceanhorn universe that’s set 200 years after the events of Oceanhorn 2. There are four classes to choose from and each with their different playing styles.

You can also enjoy co-op multiplayer with up to four friends, fight massive battles against tough bosses, experience the chilling music and soundtrack as well as Infinite replayability. There are also tons of items you can try out for maximum dungeon mayhem.

Absolutely stunning! Genshin Impact is arguably the best open world game on mobile right now with its enticing storyline, gorgeous world, massive map and interesting characters. You can build up a team with diverse characters with each of them having their different personalities, stories and abilities.

The game’s co-op allows you play together with friends across different platforms. Together you can face up to tough bosses and work together to defeat them, conquer domains with friends and collect handsome rewards, or just explore the gigantic open world and enjoy its beauty.

This is a challenging free platform fighting game that supports up to 8 players in a single online match and offers full cross-play with mobile and console. The game has an active community with over 40 million active players worldwide.

You can decide to join a casual free-for-all, wait in line for ranked matches or simply create your own custom room with your friends. The game also offers more than 50 unique playable characters that you can use to fight for glory in the halls of Valhalla.

There are very few games like this out that lets you explore an ancient and mysterious world where you can soar above the ruins or glide across the sands in hopes of discovering its secrets and experience a breathtaking adventure like no other.

You can choose to play alone in the single player story or play in the company of a fellow wanderer and explore this vast world together. Journey is an award-winning game that features incredible visuals and a Grammy-nominated musical score.

This is a 2D platformer where you get to build your own levels and include hundreds of items such as hazards, enemies, secrets, paths, programmable switches, music, weather and even powers.

You’ll have to be creative enough to build a sprawling adventure with limitless features. A level full of bosses and fast-paced challenges, a relaxing music and lots of other things. Your creation is only limited by your imagination. The level editors allow you convert these designs into platforming adventures that players around the world can enjoy.

Related: Is The Mobile Version of Holocure Legit?