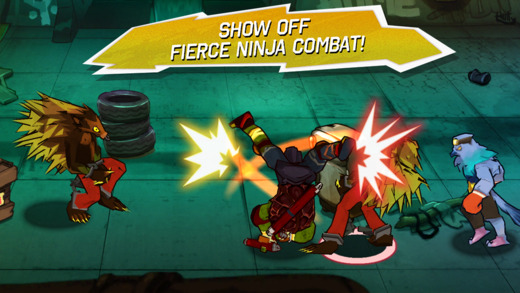 The Teenage Mutant Ninja Turtles series is one of the more popular series that has emerged during the late 80s, early 90s. As for any popular franchise, it didn’t take long to see the first video games based on the series, allowing fans of the TV Show to play as the four Ninja Turtles and fight Shredder and the Ninja Foot Clan, often saving April O’ Neil in the process. Many of these games were quite good titles, like the Konami developed side-scrolling beat’em up and a few others. With the series’ decrease in popularity, even video games based on it became scarce, even though some were still being produced. As fans of the series surely know, a new Teenage Mutant Ninja Turtles movie is going to be released soon. And, as expected, a new game has also been released in the attempt to make the franchise relevant again.

Teenage Mutant Ninja Turtles stars the four Ninja Turtles, Leonardo, Michelangelo, Donatello and Raphael as they fight the Ninja Foot clan, which is apparently attacking and conquering all pizza’s restaurants of the city. In order to stop the clan from carrying out this evil plan, players will have to complete 35 action packed stages by controlling one of the Ninja Turtles. Each stage is literally filled with baddies to take down, with the occasional special boss that fans of the series will surely recognize.

The gameplay experience of Teenage Mutant Ninja Turtles is a refinement of the one included in Combo Crew, the team’s previous title. Players don’t have direct control of the turtles, unfortunately, but can direct them toward the nearest enemy with taps and swipes, which unleash a basic combo string and special combos respectively. It’s also possible to counter enemy attacks by tapping on the symbol appearing every now and then, allowing players to keep the combo going. Once the combo has been going on for enough time, it’s possible to unleash a special move which summons the other turtles on screen. The combos are also quite varied, coming with different properties like guard breaking, launching and more. Despite being an arena based affair, the gameplay experience never feels dull, as stringing together attacks is incredibly satisfying. The controls work incredibly nicely so you won’t ever miss a combo or an attack due to unresponsive controls.

All the Ninja Turtles can also be upgraded by using the two currency types found in the game. Unfortunately powering up all Turtles to the max may prove to be quite grindy, as it takes quite some time to collect the required amounts of coins and gems. Powering all of them up is not required to complete the game, so you may just want to focus on a single turtle. As expected, currencies can also be purchased through IAPs. All of the game’s unlockables can also be purchased but there’s nothing that cannot be obtained by simply playing the game.

Graphically, Teenage Mutant Ninja Turtles looks really good, with a cel-shaded style that suits the game perfectly, giving it a cartoonish look. Despite this, some old time fans of the series will not like the overall design of the characters, as they are not based on the classic ones but on the reboot ones. The game also includes plenty of voice acting, with Master Splinter coming with the same voice included in the upcoming movie. One welcom surprise is the return of Cam Clarke voicing Leonardo just like in the original TV Show.