Tap Knights: Heroes & Monsters is a really charming idle clicker for iOS. With beautiful graphics and straightforward mechanics, this one is easy and fun to play. And we’re here to help make the experience even better by sharing a bunch of Tap Knights cheats and tips in our complete strategy guide.

Chances are that if you played an idle clicker before, you know about everything there is to know about how to play the game, but in case you didn’t or you want to make sure you’re not missing anything our guide will definitely help. So let’s not waste a single second and instead let’s check out some Tap Knights: Heroes & Monsters tips and tricks below!

Use the skills often
Unlike other games where skills have huge cooldown timers, those in Tap Knights can be used every 30 seconds, so it doesn’t hurt to use them often in order to cruise through the stages.

Just make sure that you have them all ready to be used when you’re facing a boss battle in order to increase your chances of winning. But with 30 second waiting times, that’s not too difficult to plan ahead. 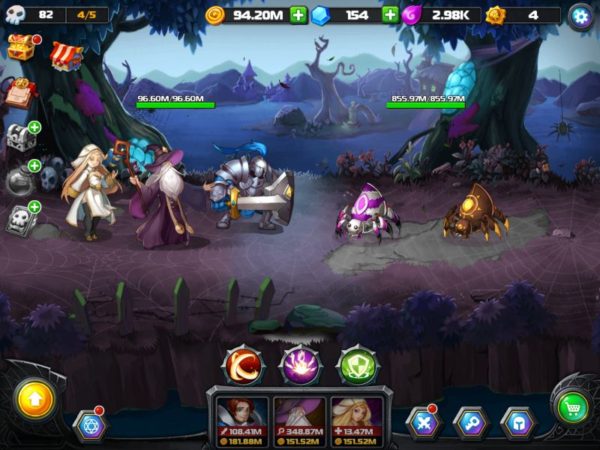 Watch the ads to unlock chests
Chests in this game are extremely important because they hold equipment bits which greatly increase the stats of your heroes. The good news is that you can get a ton of those for free by watching ads, and it’s something you should do.

There is a maximum of 5 chests you can unlock in a row watching ads, then you have to wait 1 hour to be able to watch one more ad. This means that you can actually get a ton of chests easily in the game – and you should because if you end up collecting enough shards to evolve your equipment, you’re in for a real treat!

Collect from your mines (and upgrade them)
As soon as you have the chance to unlock a new mine, make sure you do so. These generate resources for you or give you all sort of boosts and they’re extremely useful to hold.

Don’t forget that you can also upgrade these mines using the honor points you get from rebirthing, so you should plan ahead your upgrades as they tend to become very expensive quickly.

Keep leveling the equipment up
The Soulstones that you collect when you rebirth or from other sources should always be used to level up your heroes’ items. Some of the items influence the stats of your group (like the health boosts and armor), while the damage ones are only affecting the hero equipping that particular item.

When it comes to what items to level up first, this is the order I would recommend: Damage first (starting with the swordsman, then the Wizard), followed by Health, Healing and finally Armor.

Try to keep all the levels of all equipment at the same range. For example, I level everything up to lvl 5 first, then to level 10, then 15 and so on.

Check the store for freebies
Relatively early in the game, you will unlock the merchant. You can buy all sorts of things from there, but you also have the option to watch an ad for one of the offers in the store. Make sure you take advantage of that offer in order to help your progress.

What talents to level up
When you reach a certain level in the game, you will unlock talents. You will earn skill points as you play and you will be able to spend them in order to unlock or level up Talents for your characters.

There are a ton of options there and few skill points to use, so you should always pick carefully. I personally chose to focus on the Priest’s skills after investing a bit in the Warrior’s damage. The healing is extremely important during boss battles in my opinion.

Rebirth at the right time
Rebirthing should be done at the right time in order to maximize your gains and really give you a huge boost when you start over. Ideally, you should rebirth when you reach the indicated level for double soulstone rewards. That’s a bit of a challenge because usually the boss you have to defeat to get there is really tough, but it’s doable.

If you don’t want to get there, you can still rebirth before that. In that case, go as far as possible – until the boss you are facing seems impossible to defeat. Look for the maximum soulstone gains and also ideally a Boss card which allows you to skip three bosses quickly.

Finally, don’t use the rebirth immediately after defeating a boss – wait until you get to the other, because you will easily beat the mobs attacking you until then. This gives you even more goodies when you rebirth!

Defeat those bosses
When you reach a really tough boss, there are a few things that you can do to make sure that you defeat it and move on. It goes without saying that you should have your heroes at maximum levels and all the items upgraded as much as possible. Then, do the following:

– start the battle with your skills ready to use and use them smartly: the first two should be used as soon as the battle begins, but wait for the Healer’s skill. Wait until the boss damages you at least twice, then use it: the skill absorbs the next damage dealt by the boss and if you activate it when your health is already low, your squad will heal a bit more in the meantime!

– wait for an optimal chest before heading to the boss battle. Eventually, you will get one that gives you a damage boost: take it (or even better watch the ad for even more damage) and head into battle.

– watch the ad to continue the battle. This only works if you really have a chance and the boss is relatively low on health (30% or less), but it’s worth trying – I’ve beaten many of the bosses required to double my rebirth earnings this way.

How to unlock the final two characters?

At the moment of writing this article, it looks like there are two extra characters that are locked. However, we haven’t found a way yet to unlock them and we’re not sure they actually exist. Maybe a future update will add more, or you have to reach a really high level to get to them. We’ll let you know if we learn anything about this.

These would be for now our Tap Knights tips and tricks. If you have extra advice to share with fellow players, don’t hesitate to do so by sharing a comment below.