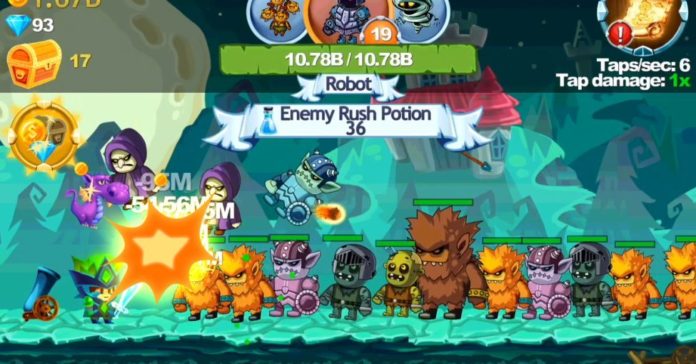 Tap Knight is an RPG Clicker game available for Android and iOS, and a great treat for fans of the endless clicker / idle genre. And we’re here to help you get the most out of it by sharing a bunch of Tap Knight cheats and tips in our complete strategy guide.

Created by Pixowl, the guys behind amazing games like The Sandbox Evolution or Garfield: Survival of the Fattest, Tap Knight – RPG Clicker Game is a beautiful game that puts you in the shoes of a brave knight that has to slay hordes of monsters and epic bosses in his quest to free the world of these pests, a village at a time.

You’ll have a lot of fun playing the game and things will get even better after reading our Tap Knight tips and tricks below.

Tap with three fingers
There’s really no other way to get the biggest bonuses in terms of damage by tapping unless you tap using three fingers. You can use even more, but three is the minimum you should use.

My recommendation, in order to make things as easy as possible, is to place your device on a flat surface (bed or desk) and tap on it as fast as quickly with three fingers. When your hand gets tired, switch it and keep going! The monsters won’t wait.

Of course, it’s even better if you pay attention to the whole thing and tap the horse both when it’s coming to the mine and when it’s leaving it… but if you don’t care to do that, just tap as I recommended and you’ll still do better.

Finally, don’t forget to actually sell the treasures it brings to you: there’s a maximum of 1,000 treasures you can hold, but a minimum of 200 you need in order to make the sale. My advice? Sell often to reap on the profits and get nice money for the upgrades.

Spin the wheel!
Watch the ads to spin the wheel in order to get some nice boosts in the game. Early on (and for most part of the game), it’s good to have a boost that increases the money you get from slaying monsters. So don’t shy away from spinning again if you don’t receive the boost you want and need!

Be smart when activating power-ups
Most of the power-ups you have in the game should only be used when facing bosses that you can’t defeat otherwise. Apart from the spear (first power-up) which refreshes often, all the other power-ups take some time until they can be used again, so take advantage of them to beat those hard to kill bosses, because they are the only ones that have a time limit.

Invest in artifacts
When defeating the major bosses, you earn special coins which can be invested into artifacts or upgrading your gear. Since the gear can also be purchased with diamonds that are relatively easy to get even without spending real money, my suggestion is to only invest those special coins into purchasing artifacts.

Tap Knight seems to be made in such a way that there’s just one way of unlocking artifacts, in the order they are listed – but if you really wand to skip one because you don’t really enjoy its effects, it could be a good idea to just wait until you have enough coins to buy the next one. Just make sure it is indeed useful to your end game.

Upgrade your gear
Tapping the scroll icon in the upper right corner takes you to a menu where you can collect stars for bragging rights in the world, but where you can also buy new armor and gear for your knight.

The key here is to wait as long as possible before making an investment and only spend diamonds to get better gear. My recommendation is to wait until you get 100 diamonds before making the first purchase which triples the amount of gold you earn. Then keep on upgrading each time the price in diamonds until the next armor is too high to make waiting worthwhile.

These would be our Tap Knight cheats and tips right now. If you have additional advice for fellow players or even extra questions, don’t hesitate to let us all know by commenting below.