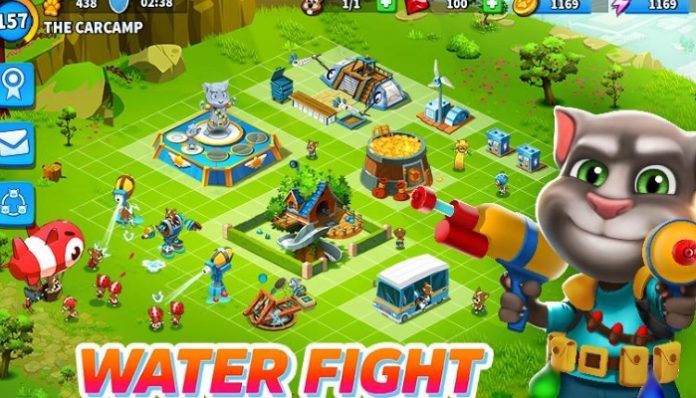 Talking Tom is back and he’s inviting you to the craziest camp in the world: Talking Tom Camp! Talking Tom Camp is the popular cat’s take on the base management genre. Build up an epic camp to prepare for the biggest water fight that any camp has seen!

Train up water balloon cats, build water towers, set puddle traps and more in this wacky take on the base building genre. Our Talking Tom Camp cheats and tips will show you how to build the ultimate camp!

Talking Tom’s camp is in your hands now, so it’s up to us to prevent other players from splashing it to smithereens! Let’s get started with our Talking Tom Camp cheats, tips and tricks strategy guide!

If you’re ever unsure of what to do next, take a quick peek at your goals by tapping the star on the right side of the screen. The game will show you a list of things that you can build or upgrade, ensuring that your camp stays awesome.

The best part about this is that once you complete a goal you can collect a reward after, which is usually a gem or two. You should be constantly knocking off things on your goal list for those sweet gems!

Deploy your troops in the right order!

When filling your bus with troops, it’s best to pay attention to the two main stats: water resistance and damage. Water resistance is essentially the troop’s health, and damage is, well, damage! Certain troops excel at specific things while others don’t, and it’s up to you to make sure you utilize your troops’ to their fullest potential.

For example, the first two troops you’ll unlock are the Ballooners and Blasters. Ballooners are your typical grunt troops with all-around stats. Blasters have much higher damage than Ballooners but less water resistance.

To get the most out of these troops, it’s best to deploy your Ballooners first to grab the enemy’s attention so that your fragile Blasters can attack without fear of retaliation!

Play the campaign before heading into PvP!

The single player campaign is made of preset levels that are supposed to familiarize you with the game’s rules. For that very reason we recommend playing through as much as the campaign as you can before jumping into PvP, as it’ll teach you about different defense towers, traps, troop tactics, and more.

Not only that, but the campaign is segmented into chapters, and the future chapters don’t unlock until you’ve upgraded your Troop Shop to a certain level. Play up to the latest unlocked chapter then feel free to jump into PvP.

Get all stars in a campaign chapter!

Each level in a chapter has three stars for you to collect. You’ll automatically given all three stars if you can completely wipe out the enemy base in a level. If you can manage to get all stars in a chapter, you’ll be rewarded with a hefty amount of gems. Be sure to leave no level fully completed!

The campaign levels are also worth a lot of energy and coins in their own right, so there’s that too. Just make sure that you’re not near your storage limit when you complete a level, otherwise all those resources will go to waste.

Watch some ads for extra resources!

If you’ve got the time and don’t mind some advertisements, try watching the gift boxes. On the right side of your camp are two gift slots. Over time these slots will fill with gift boxes, but before you can open them you’ll need to watch a short advertisement. These gift boxes can contain coins, energy, and even gems, so they’re actually a pretty good deal.

That’s all for Talking Tom Camp! If you’ve got any other tips or tricks to share, let us know in the comments below!