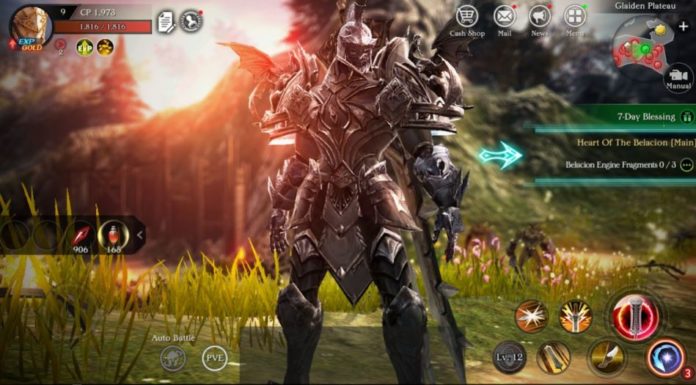 In today’s article we are going to share with you all of our Talion tips and cheats to help you level up fast and become a force to be reckoned with.

In this game you will encounter a ton of features typical to RPGs, so if you are familiar with the genre, you will probably have some knowledge on what to do and what your goal should be – getting to end game, but if you are new and eager to learn all about it, then we are here to help you do just that!

So, without further ado, here is our article with the best Talion tips and tricks to help guide you through the game!

When you are right at the beginning, you should begin following the main quest line, which will allow you to gain a basic understanding of the game, as well as give you tons and tons of EXP.

The main quests will give you more than enough things to do so you can level up easily and also keep up with the game’s interesting story line (with good voice acting too). I suggest progressing as much as you can, and if you can’t seem to have any more quests, then it means that for your current level, you finished all the possible quests.

When this happens, all you need to do is start going into dungeons and doing other side quests to level up. If the main quest disappears, then level up to meet the new requirements and you will be back on track in no time.

So, the baseline here: keep doing the quests because it’s your main way to increase in power.

If you want an even faster way to level up, well this is it! A Growth Scroll will help you level up by giving you increased experience gained from all sources, so I suggest that you always use one (or have one active all the time that you are in game – questing or farming).

In my opinion, whenever you want to level up fast (and you are actually active in the game) you should use a Growth Scroll II because that increases your exp by 100% for 8 hours – so even if you go offline, it’s going to last. (also – don’t forget to replenish it once it runs out)

There are two main alliances in the game: the Aegis and the Bident. The game will recommend you one of them, and I suggest that for your first character you should go with the recommended because you will receive an extra reward.

If you were to put it bluntly – it’s like Horde versus Alliance in WoW. The Aegis is the “good guys”, while the Bident are the Chaos followers, or rather the “bad guys” (but not quite bad either). Both of the Alliances have basically the same classes, so I definitely suggest going for the one which gives you a reward too – the recommended alliance.

The reward you get will be given to you when you create your very first character in the recommended alliance, so it’s a one time only thing (unless you play with a new account) – the reward is an Alliance Support Chest containing goodies.

Pick a class according to your play style – don’t worry, they’re all good!

There are 4 classes for each of the alliances, each with a different name than in the typical RPG, but basically following the same function. The classes are also the same (name and everything), in both of the alliances:

– Kyle (warrior) is a strong fighter who has high HP and DEF and can be the tank of the team.

– Velletrin (assassin) is a swift killer, who lurks in the shadows and bases on high DPS and Critical Attacks.

– Pell (mage) deals magic damage, and has damage over time skills which have a very long range.

– Aizen (gunslinger) has a variety of weapons, from sword to bombs and magic guns, and their skills vary quite a bit.

Choose your class according to your play style – no matter what you choose, you’re going to have pretty good time because all of them are powerful.

Every single day your daily quests will reset. I suggest checking them out and doing them because you will receive tons of Gold and EXP and they are basically free. All you have to do is just auto route to the monsters requested (because most of the time it’s easy tasks) and let the game do its auto battle.

The auto battle works just fine in Talion (unlike in other games, where you might have second guesses about using it) and basically the whole game can be played just around it (you have to accept the quests yourself tho).

Check out the daily quests in the Quests -> Daily tab and just select the quest you want to do and “Progress”. This will auto route your character to the requested monster and you can come back to claim the rewards once the task is complete. This will give you quite decent EXP, which also takes me to the next point – dungeons.

Try out the dungeons

There are quite a few types of dungeons in the game. Here you can farm exp and other goods as soon as you unlock them. Some of the dungeons will be unlocked later on, so make sure that you do the previous ones as much and as often as you can (and want).

My most suggested dungeon would be Gold Mine (for the gold of course) and the Ordeal Cave (for exp). For every dungeon you will have in the top right corner a number of tickets that you have for that dungeon.

When your tickets run out, you can choose to buy them, but I really don’t recommend it because you will get more for free, so why waste currency? I suggest using all of the tickets whenever you can, just to clear all of the dungeons daily. (these could count as daily quests as previously mentioned)

The Challenge Tower will be a little bit more difficult to complete fully early on, because each stage gets progressively more difficult – and wields better rewards. In my opinion you should progress as much as you can every time you increase in power, and when you just can’t pass the level no matter what, wait to power up some more.

The dungeons also have a recommended BP! Keep this in mind – if your power isn’t as high as the recommended one, you might still be able to do it, but better not to risk it and lose a ticket when you could just upgrade your character a little and increase your power, then do it.

Start working with the map

In this game you can also AFK farm to get exp. If you are either too lazy to level up by doing quests or don’t have any more quests to do, you can start farming regions with monsters that are the same level range as you.

To do this, you see the minimap in the top right corner. Go there and you will see a list of monsters and areas on the map. Tap on the monsters you want to farm, and you will automatically head on there!

If you are playing with a friend, or simply want some buddies to do the same dungeons and farm together, you should definitely look into the guilds! Choose to join a good and active guild!

Also, you can add the people in the guild to your friends list and form a party to farm together. However, if you can’t find anyone willing to farm the same content as you, head on to the Community tab, then Party. There, you can find other players running the stuff you might want!

Get geared up and make upgrades

For all of the content above, you will need to be powerful – what other way to get more powerful other than leveling up and gearing up? Well, you should definitely gear up!

By improving your gears and getting better gears overall you will always increase your power, so I suggest doing the dungeons where you can get gears as much as you can. There are some gears which you also get from quest, so always focus on getting the better ones and upgrading it constantly!

These would be all of our Talion tips and tricks that we have for you right now! Do you want to share your own Talion tips with us and the other players? Then leave them down in the comments section below!