The golden age of harmony between humans and gods has come to an abrupt end. The reign of chaos is now among us, lead by the underworld army. Zeus, Athena, and Odin have put out a summon for all gods and heroes. Will you join the fight?

Tales of Radiance is an anime idle RPG where you put together the ultimate team of gods and other mythical figures. Outfit your heroes with gear, teach them new ultimate abilities, and save the world from the demonic rampage!

Use gold and hero XP to level up your heroes!

In Tales of Radiance, your heroes do not gain experience points on their own. In order to power them up, you must manually level them up using hero XP (those green potions) and gold.

To do this, simply go into your heroes and hold down the Lv. Up button to start leveling them up. If you want exact levels, you can just tap the button once. This is the main way of powering up your heroes, so do not forget to do it often!

You get a lot of hero XP and gold every time you take down a boss, so do not hesitate to level up your heroes. If you are afraid of investing too many resources into low rarity heroes, don’t be – you get all of those resources back very fast!

Go to the Babel Tower for more enhancestones!

When a hero reaches maximum level, they can be ranked up to increase their limits even further. To do this you need a hefty sum of gold and enhancestones, purple stones that allows heroes to limit break.

There are a variety of ways to get enhacestones, but the main method is to venture up the Babel Tower, a mysterious tower that unlocks at profile level 15. You will fight against randomized enemies on each floor, but conquering them is worth a lot of enhancestones.

Use the elements to your advantage!

Every hero in Tales of Radiance has one of the five elemental affinities: water, wind, fire, light, or dark. Each element balances each other out; water puts out fire, fire scatters wind, and wind evaporates water. Light and dark heroes beat each other out. If you have the elemental advantage, you deal 25% more damage and your accuracy is increased by 20%.

Additionally, there is also elemental synergy that you can take advantage of. There are multiple times of synergies, and we will list them all here.

If you are having trouble with a particular boss, take a look at their elements and see if you can use them to your advantage. You can even compose your team following one of the synergies listed above for an even greater advantage.

Battles consist of teams of up to five heroes duking it out to see who is the strongest. You will notice that the battlefield is laid out like a sort of grid, with each hero taking a spot on the grid depending on the formation.

When you first start Tales of Radiance, you will start out with only the Arrow formation. This formation has one hero in front, two in the middle, and two in the back column. Generally, the closer you are to the front row, the more damage you will take.

Thus, you must be mindful of where you put your heroes when making your formation. Tank heroes should go in the front row to absorb all the hits. Fighters can go in the middle column, and Supports and Mages can go in the back column.

When you hit level 20, you will unlock your second formation the Pincer, which is basically the Arrow reversed. This formation allows you to protect a single hero from any kind of harm!

Be sure to grab all the freebies!

Tales of Radiance is celebrating its launch, so there are tons of freebies for you to collect. First off is the “Preview” reward: during the main quest, you will see a reward at the top left corner. You can tap on it to collect the reward, and you must wait a few minutes before the next one.

There are a total of 12 rewards to claim, including a free 4-star Tank and Support hero, 350 gems, a bunch of gold, and some hero XP. Check in often to claim your stuff!

Second thing to do is the 7-Day Goal, accessible from the main menu. You have a week to finish the various goals listed under the four tabs. You will need to reach a certain point in the story and perform some guild actions. You will earn a metric ton of gold and some enhancestones for your troubles.

Third thing to do is the Timed Events, also accessible from the main menu. Under Level Packs, you can claim free prize packages if your profile level gets high enough. You can get a lot of Grand Summoning Scrolls from this, which is what you are mainly after. Play often to level up!

The last thing to do is the Midas Touch. Here you can perform alchemy, which is basically getting free gold, just like in the myth. You can only do it a certain amount of times a day for free, and any further attempts require gems. Just do the free attempts, because you can claim freebies afterward.

The formation you use is ultimately up to you and which heroes you put in your team. There are four types of heroes in Tales of Radiance: Tanks, Fighters, Mages, and Supports.

Tanks are your frontliners who will lead the charge into battle with crowd control skills and damage mitigation shields. They have high health and defense, but low attack and speed. Their job is to absorb damage for the team and debuff enemies.

Fighters are brutal attackers that deal exceedingly high amounts of damage to single targets. Sometimes they can debuff enemies as well. These are your main damage dealers, and they will usually be the ones to land the killing blows.

Mages wield the elements to inflict damage against multiple enemies in the group. They do not deal as much damage as Fighters, but they excel in spreading their damage across the entire enemy team.

Supports are the backbone of the team, as they focus on healing your team’s wounds and protecting them with shielding barriers. You always need at least one Support on your team to get them through the thick of things!

Keep unwanted heroes around… or sacrifice them!

You will be given the opportunity to summon a lot, and when you do so you will eventually start receive duplicate heroes. If you already have that hero, you can promote them using the duplicates and some other miscellaneous heroes. You will always have a use for seemingly useless heroes, so do not worry!

But, if you have absolutely NO wish in carrying a hero around anymore, you can always sacrifice them at the Ritual Chamber. Sacrificing a hero here will grant you all of the resources you used to power up that hero back, and you will also get a rare currency known as divinity.

Divinity can be spent in the Hero Shop to purchase specific heroes of your choosing, but you need to save up a lot. All of the heroes here are powerful 5-star heroes, so it is definitely something to consider.

On the main quest battle screen, you can access your Voyages. Voyages are timed adventures where you send out your heroes to complete the task. Once time is up they will return with the goodies in tow.

Voyages require certain heroes to complete, so you may want to hold onto some heroes. Oh, and do not worry about fighting for your heroes’ time, as heroes can still participate in any battle even if they are sent away on a voyage.

Even though Tales of Radiance bills itself as an idle game, to get the most of it you will be constantly juggling battles. Any, and we mean ANY battle in Tales of Radiance can be left alone and it will still play out regardless of what you are doing.

And that is all for Tales of Radiance! If you have any other tips or tricks to share, let us know in the comments below! 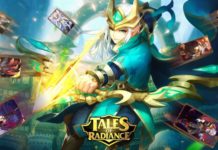