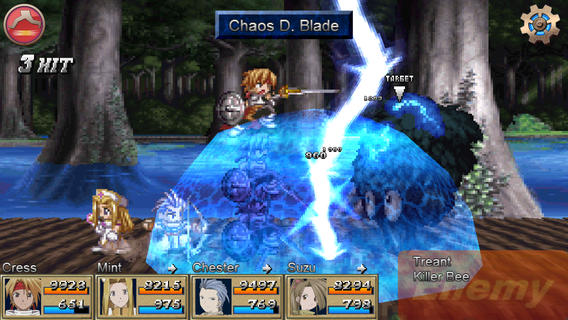 The Tales Of franchise is a Japanese role playing game series published by Namco Bandai that has recently finally started getting some recognition in the West. Success is something the series definitely didn’t lack in Japan, thanks to a steady flow of releases on several consoles. After a few mobile games that have stayed in Japan, Namco Bandai has decided to enter the Western mobile market with the iOS port of Tales Of Phantasia, the first entry of the series originally released on Super Nintendo before getting ported to a variety of consoles.

As a long time fan of the series, I have been surprised by the Western release of the port since I never thought the series’ popularity would be getting so big as to bring Namco Bandai to do something like this. I was even more surprised in learning that the game is a free to play title with optional IAPs. Which in truth really aren’t, as their implementation completely ruins the game

Tales Of Phantasia plays like many other classic role playing games, with a 2D graphical style, overhead view and plenty of locations to explore. What sets the game apart from the competition is its battle system, called Linear Motion Battle System, which allows gamers to control a single character directly and fight enemies in real time. The character you’ll be using most is definitely Cress, the main character, who’s able to use a variety of regular attacks and special attacks called Artes, which can be combined together to create some really damaging combos. The other characters have a more supportive role, with Mint providing healing, Chester long range bow skills, Arche elemental spells and Claus summoned spirits.

The game’s plot is nothing too original, even for 90s standards, but it’s got a good pace. Everything begins in the village of Totis, where Cress and Chester live. The two friends leave the village on a hunting trip, only to be forced back to town when Totis gets attacked by a mysterious army, killing most villagers in the process. Little do Cress and Chester know that they will be embarking on a journey through time to save the world from the terrible Dhaos. Despite the apparent simplicity, the game’s story has its deep moments where players will find their own values challenged by the tragic circumstances faced by Cress and his party. All the characters are quite likeable and well developed thanks to the inclusion of Skits, small scenes where the characters discuss themselves or the current events. This feature alone makes the whole game superior to a lot of other classic role playing games which end up developing only a few characters of the main party.

The iOS port of the game plays pretty much like Tales Of Phantasia: Full Voice Edition, released on PSP a few years ago. Even the interface is the same as the PlayStation Portable version, which looks and works great on the iOS devices. Touch controls are also incredibly responsive and very well done, even in battle. If you have been playing Tales Of games on consoles you’ll have to adjust to them but it’s not as painful as it may seem in the beginning.

Despite looking and sounding better than the only other English version of the game, released on Gameboy Advance, Tales Of Phantasia on iOS has a few serious issues which may prevent gamers from enjoying the game fully: the need to be always connected in order to play and the IAPs, with the latter being far, far worse. Earlier in the game you will be confronted by  a boar, the first boss battle of the game. Following the inevitable defeat, the game will inform you about Miracle Orbs, a new item which can be used to revive the party. The first one is free, all the following ones will have to be bought separately. The main issue with all this lies in the fact that the game’s boss battles are incredibly difficult and it’s really hard to defeat a boss without excessive grinding or by purchasing extra Miracle Orbs and XP boosts. The whole issue is made more aggravating by the fact that Save Points have all been rearranged and there are fewer of them in this version of the game. These issues actually make playing through the game a nightmare, if you don’t plan to buy stuff with real money: most players will simply give up before the game can show its best qualities. A shame, a real shame.

Tales Of Phantasia is an excellent role playing game at heart, offering an interesting story, compelling character and a battle system that’s like few others. The iOS port is completely damaged by the IAPs, which make it impossible to complete even the earliest parts of the game without buying some extra items or grinding. If it were a paid title, it would have been one of the best RPGs released on iOS; in its free to play form, it’s just a frustrating experience that’s not worth the effort.