It’s tank versus tank in this all-out war! Super Tank Blitz is a 2D tank game full of explosions, chaos, and everything you know and love about tanks! Super Tank Blitz lets your creative side flourish as well with an in-depth tank builder and customizer.

Choose from a variety of parts and components to build your dream tank and learn how to make it all work with the help of our Super Tank Blitz cheats, tips and tricks strategy guide below!

You’ll learn a few tricks that will help you win all battles, build the best tank and get more out of the game, overall. So let’s not waste a single second and instead let’s check out some Super Tank Blitz tips now!

Turn your opponent upside down!

This is the main thing that you should be aiming for in each battle. If you manage to turn your opponent upside dawn, the battle is won as you can easily take them out afterwards, since they will no longer be able to move.

Not all tanks can be turned upside down (make sure yours isn’t one of those that easily flips!) but if you can do it, it’s worth trying to do it.

As you play the game, you will learn to create designs that help you take advantage of this and turn other tanks upside down, while giving you enough stability so that you are never in that situation.

Rush in fast and push them over!

Another good strategy to try when the one above doesn’t work is rushing in and pushing the enemy tanks over the end of the battlefield. This is an instant win for you, no matter how much health they’ve got left!

In the earlier stages, when the trophies are low, this is easier done than later on in the game, but us here at Touch Tap Play still have a lot of success using this strategy.

If you move towards your enemy and have enough time to catch some speed, you will see that your tank will go faster. This will also give it some additional power that will make it even easier to push the opponent over the edge.

Usually, it’s easiest to achieve as soon as the battle begins – just rush right, shooting like crazy and start pushing. You will most likely have enough time left before the enemy blast you away.

The best part about this is that on many occasions, doing this will also flip them over, so you shoot two rabbits with one shot (three, if we consider the enemy tank).

An interesting thing in the game is that you can actually dodge incoming projectiles, having various options when it comes to avoiding them. It takes a bit of practice and sometime a little bit of luck, but it’s something worth trying to get better at.

Just like your own commander, enemies will have to wait a bit before being able to shoot. These shots can easily be anticipated, as most people will shoot as soon as the meter is full.

This means that, unless you take the approach recommended above and rush in to the enemy, you can keep the distane and retreat when they shoot, so that they don’t hit you. Then quickly change direction, move toward them and launch your own shot.

This strategy, as you will see, takes a bit to master but comes with guaranteed wins as it will also frustrate the opponent and make them do more mistakes. Try to practice it in a few battles and you will see how solid this is!

But even if you don’t have the skill or the desire to choose that as your main strategy, you can still get rid of incoming projeectiles: you can simply shoot them!

You can shoot them with a secondary weapon or your main one – it doesn’t really matter, as long as you actually hit that projectile.

While in most cases this isn’t as useful (because shooting them down deals no damage to the enemy and you also run the risk of missing, resulting in only you getting hit) it is something that you should have in mind and consider doing.

There are actually secondary weapons whose main job is that of shooting down incoming projectiles – you can equip such weapon if you want to take a bit of the load off your shoulders.

We found out, during our extensive Super Tank Blitz sessions, that secondary weapons that don’t have to be manually activated are usually more useful.

You already have to tap a lot of buttons during the game – and aiming does take time – so you don’t need the extra challenge or concern of adding another button for you to tap every now and then.

In terms of what weapons to choose, we usually go for those dealing damage (so no defense-oriented ones), but it all depends on your style of play. If you like to keep the distance, dodge projectiles and carefully aim all your shots, a defensive one might work better. Experiment and you will see which works best for your play style – but do know that we recommend the offensive ones.

Build Your Own Tank (Or Buy a Design)

Now this is something that could have an entire guide of its own. Creating your own tank for scratch is something that gives you not only the freedom to express your creativity, but also come up with some truly unbeatable tank designs.

While there are limits regarding the number of weapons and other goodies you can add in order to keep things balanced, simply going for a shape that holds its ground better than others can give you a massive advantage.

We recommend building a tank that is heavy up front and has a little notch that goes under the wheels of other tanks. This way, you will ensure that yours won’t end up upside down, but will give you, at the same time, the chance to quickly flip over the opponent.

But if you’re not the creative type, you can always check out the market and buy a design created by other players. We tried some funky ones and had great deals of success with them.

Ultimately, the design of your tank doesn’t influence the core gameplay too much, so just let your creativity roam free and choose something that you like. And doesn’t go upside down instantly, of course!

Focus on playing your favorite commander

As you progress through the game, you will unlock new commanders to take into battle. Each comes with their own default tank and, most importantly, their own weapon type.

These commanders are definitely not created equal, but they are made to fit all sorts of different play styles. You have Jack, which is more defense-oriented (and pretty useless, in my opinion), you have the starting commander that is pretty much an all-rounder and so on.

Try them all out and see which suits your play style better. Also know that their tanks will get better (and larger) as you level them up, so even if you start with a tank that barely holds its ground, you can easily improve it if you level up your commander.

These would be our Super Tank Blitz tips and tricks. If you have additional strategies to recommend to fellow players, don’t hesitate to do so by commenting below. 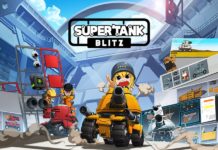