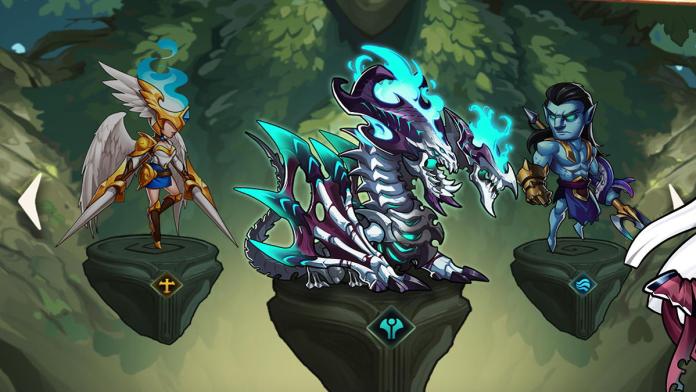 Welcome summoners to our guide on Summoners Era. There are many powerful heroes to choose from in this game, with five-star heroes hanging around in each element. It might be overwhelming to build your own team, so let us do the hard work for you!

This guide is a list of our favorite heroes and ones that we think are the best. Of course, with so many heroes to choose from it is hard to say who is better than the rest, but in our experience these are some of the best heroes the game has to offer right now. If anything, it will give you ideas for team builds.

So, without further ado, here is our Summoners Era best team build guide!

Zalidus is a dark element assassin hero who rips into his opponents with fearsome speed. His active skill allows him to tear apart the enemy’s back line. His passive makes his basic attacks have a 50% chance to apply bleed, which will slowly finish them off if Zalidus doesn’t get to them first.

Zalidus’ true potential comes out when he starts taking damage. For every 5% of his maximum HP is lost, Zalidus’ attack, armor, and critical rate will increase. Zalidus is extremely scary when he’s low on health, but that’s not even all of his skills!

The thing that will truly make Zalidus a formidble foe who just won’t die is his final passive skill, Healing Soul. When Zalidus drops below 50% HP, any critical hit he lands will restore HP equal to the amount of damage he dealt.

With these two passives, it’s easy to see why Zalidus is considered one of the best heroes in the game. He gets stronger the more he is damaged, and he has very strong self-sustain, making him almost indestructible!

Lass is a nature element ranger hero that uses a powerful bow with poison-tipped arrows. Lass’ active skill deals damage to three random back line heroes and poisons them for three turns.

While the poison damage is great, this skill also has a small chance to silence affected targets for three turns. This silence can be huge if you get lucky with it, and it can totally shut down a team that relies on powerful active skills.

Lass also gets stronger depending on how many abyss, fire, or dark heroes there are on the enemy team. He also gives a buff to any ally nature, water, or light heroes on your team by increasing their critical rate and damage.

Lass’ consistent damage over time makes him a force of nature. He is resistant to silence and completely immune to poison, but his basic attacks have a 40% chance to poison targets, with a 10% chance to inflict silence.

Lass’ strength somewhat relies on a little bit of luck, but he can completely screw over an enemy team if his passives activate enough. He’s a great ranger hero to have on any team.

Zygor is an abyss element ranger hero that unleashes his ancient powers upon your foes. Zygor’s active skills hits the entire enemy group and has a 15% chance to petrify them, rendering them completely helpless.

Zygor’s passive skills just focus on making him stronger. Dragon Fang increases his attack, speed, and dodge chance. He is a surprisingly tanky ranger, thanks to his skills.

He also has a chance to block whenever he is hit by a basic attack or skill. Blocks cut damage in half. Not only can Zygor block, but the attacker who targeted him has a chance to become petrified for three turns!

So, if you have enemies that are going after Zygor, they will have a bad time. If Zygor does end up going down, he will unleash a mighty attack that hits all enemies and revives himself with half of his maximum HP. Talk about hard to kill!

Eitri is a mighty fire element warrior who crushes his foes with a giant fire-forged hammer. His active skill allows him to damage all front line enemies for massive damage, and if they have lower armor than him they will be stunned for two turns.

Eitri’s entire skill set works around this active. His first passive skill gives him a chance to remove any form of crowd control from him any time he is attacked, making him a hard beast to stop.

His basic attacks will also steal enemy armor, making his active skill much more likely to overpower enemies. His final passive increases his attack and critical rate, making him a deadly warrior.

Eitri’s armor piercing attacks and stunning ability makes him a very good choice if you need a warrior on your team.

Xavier is a light element mage who commands the power of light to smite his opponents. Light of Souls is a very powerful active skill, as it deals good damage to two random enemies and converts a small portion of the damage to healing for two random allies.

His initial passive just increases his skill damage and speed, making him able to unleash more powerful Light of Souls.

His final passive gives him a chance to revive an ally when they are defeated. Each ally can only be resurrected once, but coupling this with skills like Zygor’s passive can make for a nigh-indestructible team.

Entia is a light element priest hero who focuses on supporting her team and keeping them healthy and ready to fight. Her active skill hits the entire enemy group and gives random allies the Blessing Mark, which removes debuffs and prevents them for two turns.

Entia focuses on healing through damage. She will randomly mark two enemies with the Weak Point mark, which increases the damage they take. When Entia attacks a marked enemy, she will heal a small amount of HP to herself and a random ally.

This also works conversely. If Entia is attacked by a marked enemy, she will automatically heal herself equal to a small portion of the damage taken. This heal can also affect up to three allies, depending on how upgraded it is.

Entia can also heal three allies in times of desperation. If her HP drops below half of her maximum, she will heal three random allies equal to her maximum HP. Much like many of the other final passive skills, this can only trigger once.

Her damage through healing and emergency healing make her a wonderful pick for support on your team.

That concludes our list on some of the best heroes in Summoners Era. You only have five spots but any combination of these heroes will surely do you well. Of course, we know you have your own personal best heroes so make sure you let us know in the comments below!