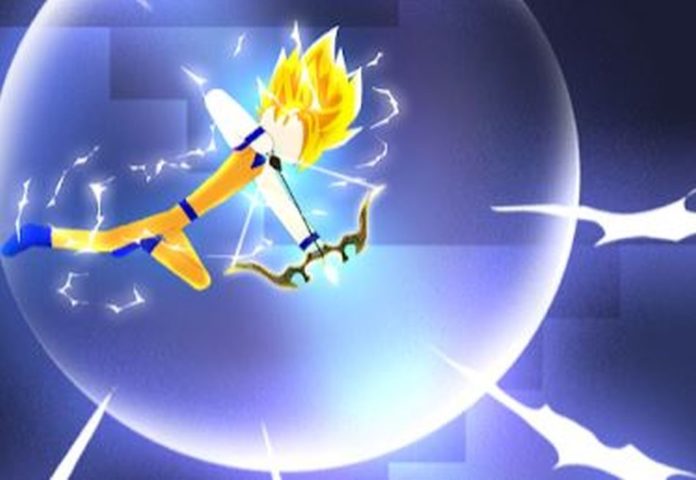 In today’s article we are going to share with you all of our Stick Z Bow tips and cheats to help you take down all the opponents and become the best archer there ever existed! If you ever wondered whether a Super Saiyan can wield a bow that good, well now you’ve got the answer!

In Stick Z Archer you will be playing as characters from Dragon Ball, which can be upgraded and empowered so that you can deal more damage and take down the opponents much, much faster!

So if you want to learn all of the tricks that we’ve got up our sleeves, then let’s not waste another second and dive right into the Stick Z Bow tips and tricks right here below!

The game doesn’t give you any helping hands in seeing where the arrow will go, so you will have to predict that yourself, or calculate it according to the power and trajectory that you send the arrow. It’s good to first send a few practice shots and get used to the controls, because that will really come in handy later on when you will have to fight bosses.

These achievements in game are basically the missions that you can do and earn extra coins for free! All you should do is head on to the game’s main interface, and go to the first menu which has a cup icon.

Head on there and you will see several missions, and also the rewards they give! Check them out, and remember to keep an eye out in game for the requirements to complete each and every one of them! They are a free source of coins, which doesn’t even require you to watch ads (which will be quite frequent in this game, so brace yourself).

If you want to change your character in Stick Z Archer, you can do so by heading to the second tab in the menu! There is only one other character unlock-able right now in the game, and the third one is “Coming Soon” – so let’s see who it’s going to be!

The first character that you have unlocked by default is less tanky than the second one, but does slightly more damage. The second character which you can unlock will cost about 1000 Coins (correct me if I am wrong, because the price wasn’t shown but I unlocked it once I had over 1000 coins), and is a little more tanky – has more health points and defense.

You can upgrade both of the characters and start upgrading them as soon as you have the coins, if you want to enhance their default stats! The upgrade cost will increase with each upgrade, so if you want the ultimate character, you will have to grind a bit for those coins!

Of course, you can also get better weapons which can boost your defense, attack and health! I suggest going for the last bow if you are going with the tanky character, and if you are using the damage dealer character, go for the third, fifth or sixth bow.

Of course they can all be upgraded too, but it’s better to have some higher stats by default without spending coins!

The bows can be unlocked by either paying coins, or by watching a set number of ads to unlock them for free (no coins needed). Overall, I think that no matter which character you are playing, the last bow is the best one. It costs 4 ads to watch in order to unlock, so if you want to get a better weapon, go ahead and get this one – it will be worth it!

Aim for the head

Whenever you are fighting, your opponents will try to aim for your head – you should do the same! This deals bonus damage, and if you hit hard enough or have enough damage, you might even one shot them! So I suggest taking that head shot every time you can aim for it!

Get more coins after your fights!

There are a few ways that you can get coins, but the easiest one is by finishing a fight and watching an ad to claim free coins! Whenever you finish a fight, you can choose to tap on the button with “+100 coins” to watch an ad and get 100 coins for free!

This can be done a lot of times, so if you want to unlock something badly, this is going to be a super fast way, since you can basically do it countless times. That is, if you don’t mind watching ads!

Another thing which will help you get more coins after your battles is by selecting to watch an ad once the post-battle spin is active! This post-battle spin will give you a random amount of coins, and if you don’t get the maximum amount, but 50 (let’s say) you can watch an ad to claim 125! It’s also a good way to claim some extra coins!

The daily gifts are basically free rewards you can get every day for simply logging in to the game! Now you might think that it’s a waste, but trust me it’s not! These gifts will give you coins, power ups and free spins, so if you really want to nail down everything that you can get in game, this shouldn’t be missed!

Now a little tip about the daily gifts – you don’t really have to log in every day to claim them, just make sure you log in by Sunday, because on Monday they will reset!

Basically you can watch an ad to claim the log in rewards for the previous days, so even if you miss a day you don’t have to worry about losing the loot!

In the bottom right side of the screen you will have a lucky wheel! Every day you will get free spins, or if you want even more spins, you can pay 100 coins or watch an ad to spin for free! This is a really easy way to claim free goods, and if you have some time to kill, you can do it here – you can even hit the jackpot of 500 coins!

These would be all of our Stick Z Bow tips and tricks that we have for you right now! Do you know some more useful game tips? Feel free to share them with us and the rest of the players down in the comments section below!