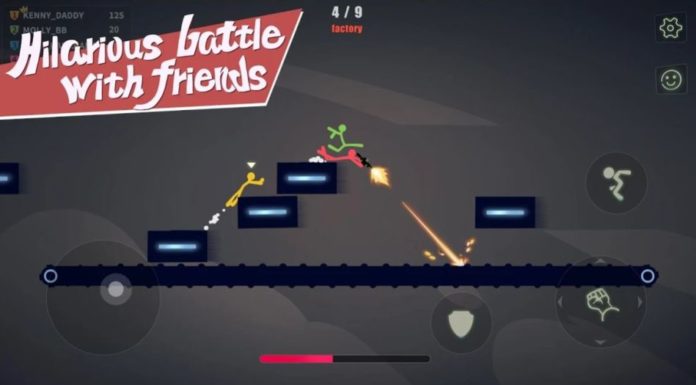 In today’s article we are going to cover all of the Stick Fight: The Game Mobile tips and cheats and help you fight your way through all the enemies and take them down one by one easily!

If you are not sure yet how to do that, then don’t worry – we will help you understand everything that you need to know, from the very basics of the game to more advanced battle tips and soon enough you will find yourself becoming a pro at Stick Fight: The Game Mobile!

Now this game is chaotic – extremely chaotic! And no matter how many tips and guides you are going to read, it’s really all up to your skills (and some luck) because you will need to actually land the hits – and wen you do that, then you are pretty much set!

But for now, let’s try to focus on what you came here for: the Stick Fight: The Game Mobile tips and tricks and dive right into them to learn how to beast all the enemies much easier!

There is nothing worse than not being able to know how to control your character. Well, right before the game starts, you will be placed in an empty room with a NPC where you are free to practice until you fully understand how to battle.

There, you can train using the on screen joystick, learn how to (properly) jump and how various attacks can work. Also, you can play around with different weapons, but that is something we will cover below.

For now, just make sure that you are practicing how to move, attack and so on here, because it’s really easy to do and no terrain or other obstacles will come destroy you unexpectedly.

This is something really fun that I have discovered randomly. If you are not sure which are the weapons available in the game, but you are really eager to find out, then you can do that while also giving them a try!

All that you really have to do is to go on to the screen where the training NPC is and there you will have after a couple of seconds a random weapon dropping down. You can go pick it up and have fun by beating the NPC to a pulp. Oh, and let’s not forget, you can also knock yourself out too, so try to aim far away from yourself if you don’t want to become a ghost!

My tips here: I would suggest that you try out the aiming, by tapping and holding on to the fight button (the bigger one on the right). That one will show you where you are aiming when you are holding, so try to use that to learn how to properly aim (at the head preferably).

Another thing you can have fun with is the Viper – Rocket Launcher, which is a big bazooka-like weapon, which shoots out a viper snake! That will fight you just like a player (ish…) and it will pretty much wrestle with you, which is something that you will do a lot in the battles.

In order to respawn while you are in the NPC interface, all you really have to do is tap on the little ghost icon on the upper left side of the screen. That one will respawn you instantly, and give you a new weapon that you can play with.

There are several good things that can happen when you are fighting with that poor NPC there:

– You will learn how to better master the battles

– You will unlock an achievement, and a new title that goes along with it.

So don’t back down, because it is fun and it also gives you a ton of goods!

How to actually get into the online battles?

Now this was a little bit confusing for me at start, but soon enough I figured that all you need to do in order to start a new battle is to go to the room on the right (the Play room) and then jump inside that box there sitting in the middle of the room.

Once you are inside the box, just wait there and you will notice a small white loading circle next to your character. That will show you that you’re currently matching, so it will take a while, but soon enough you will get into a battle with 3 other people!

Watch an ad to triple your rewards from the Treasure Chest

This is super useful if you want to get better rewards. After you have completed a battle, you will receive a treasure chest which you can claim. These Treasure Chests will contain Gold, which will be useful to you.

You will see there an option to watch an ad and triple your rewards. I suggest that if you don’t mind spending at most 30 seconds to watch an ad, then you should definitely do it because it will give you 3 times the amount of rewards you have in the chest, so it is worth it.

A little tip here: Another thing you need to keep in mind is that at start you will not get a lot of coins, because those are directly proportional to your character’s level, so if you increase your level, you will get more coins! (a.k.a. the higher level you are, the more coins you get!)

Get a lot of free coins!

There is one way to get a lot of free coins, and that is by tapping on the amount of coins you have in the upper left corner of the screen. That will pop up a new shop window which has two tabs – the Diamond and the Coin tab.

Head on to the Coin tab and the first option you will see there is the free coins! You can do this up to 3 times per day, and you will receive 1000 Coins each time! That will make for a total of 3000 free Coins every day, which is super useful, so make sure that when you have a couple of minutes to spend, you watch the 3 ads and claim the 3000 free Coins!

There are several rewards which you can claim in the game every single day, so let’s go through all of them and help you pick your favorite!

– The Sign In rewards for 7 days: Those rewards are super useful and you can pick every day what you want to receive. Those can be Diamonds, Coins, and much more, so always select the one that you like! These rewards will be claimed for 7 days, so log in to the game every day for 7 days straight and claim them all! (you will have to watch an ad to receive the reward)

– The Lucky Star Draw: This is available daily and you can see it in the upper right corner of the screen (the ribbon icon). There, simply select to do this for free once, and if you want to do it two times more, watch three ads and you can get it three more times for free!

Do your daily missions

Every single day you will have a set of new missions that you can complete. I suggest that you take your time and do all of them because you will be able to claim a ton of useful rewards, such as Gold and much more, which will help you unlock more cool stuff for your stick man!

– When you are fighting the other players, all that you really need to do is make sure that you get in their face and start punching them, before they do that to you and you will be knocked down. (so you should be the one throwing punches first)

– Each stage will last until the last man standing, or until everyone has been knocked down, which is really the most probable of them all! The stage can also end after a while, but it is most likely that one of the other option will be the one that applies.

– If you see a weapon, try to pick it up and use it on the other players before they do that. This will give you an edge on that stage, but if you don’t really pay attention to how you use it, you will knock yourself out.

– Try to always jump because that will make it harder for the other players to reach and attack you. If you are a standing target it’s obviously much easier for them to attack you and take you out.

– Always pay attention to your environment! There might be lasers, boulders or other killer environmental effects which can kill you in an instant if you don’t pay attention. Sometimes those killer traps will be placed right above weapons, which are there just as bait. So try to be very careful and always play it safe.

– The battles have 9 stages, so always try to remember how they play out and where you need to go / hide / fight because that will give you a clear advantage over your opponents, especially if they are new!

– Sometimes you don’t need to fight at all – in the laser stage, just get behind the very first wall and sit there in the corner. There will be lasers coming down and if the others don’t know it, they will get hit!