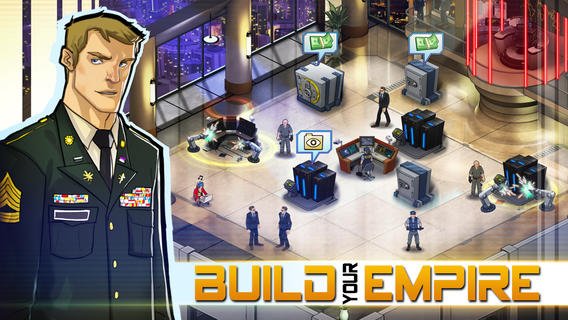 Creating the ultimate Spy Agency is not the easiest thing to do in Spy Wars, the latest iPhone and iPad game from Hothead. But since this is exactly what you are supposed to do, we’re here to help you with some Spy Wars cheats: tips and tricks that will help you get your agency forward and leave no terminal un-hacked. And it won’t be easy!

So if you’re struggling to get things started or working as you’d like them too, check out Touch, Tap, Play’s Spy Wars tips and cheats for the game!

Constantly train your agents
Probably the most important thing for you to do is to keep training the agents. Unlock the Training Room as soon as possible and make sure you’re always sending your agents to train their important skills.

Fill your base with traps
I used to consider, like many other players, that traps are really useless, and up to a point they are. But at the same time they really manage to bug the other players trying to attack your base and that only is enough to hopefully have them fail. So build traps and hope for the best. Also, a good idea would be to fully load your Security Desks with traps because generally, these are the first ones that get attacked.

Always bring in all your agents
I guess that this one is pretty obvious: use all your Mission Slots and bring with you all the agents that you can for each mission. The more agents you have, the easier it will be to complete all missions and defeat players.

Build as many stations as possible
The more stations you have, the more stations the enemy players attacking you will have to disable in order to access your Control Panel. This means that they might run out of energy before they get there, so it’s a good strategy to try out, especially early on in the game.

Carefully use your agents
Each agent is good at something and bad at something else. Learn all the pros and cons of an agent before using it. For example, the Demolitionist is a great pick for his power, but he also destroys everything that’s inside a station that he… destroys. So, naturally, you won’t want to use it when you are after the contents of the stations. The same goes for all the other agents: learn how to use them right and you’ll be doing a lot better than the others!

Get free cash or gems
In Spy Wars it’s pretty easy to get some free gems or cash by checking out some of the opportunities in the “Free” section in the store. Some of them won’t cost you a thing, so they’re totally worth trying!

Upgrade, upgrade, upgrade
Upgrading your stations not only allows you to produce and have more resources, but also makes them more difficult to break into. Upgrades are there for a reason: to improve the stats of the things you upgrade, so make sure you constantly upgrade everything you can. Also, this lets you get more from the PvP (player vs player) battles, as you will be able to hold more resources.

The Spy Points exploit
The match making in Spy Wars for iOS is made based on the Spy Points players have. So if you want to make it easier to win your attacks later and especially prevent some high quality players from attacking you, intentionally lose attack after attack to lower your Spy Points.

This would be all for now in terms of Spy Wars tips and tricks for this addicting iPhone and iPad game. If you have other suggestions to share with us, let us know by commenting below.