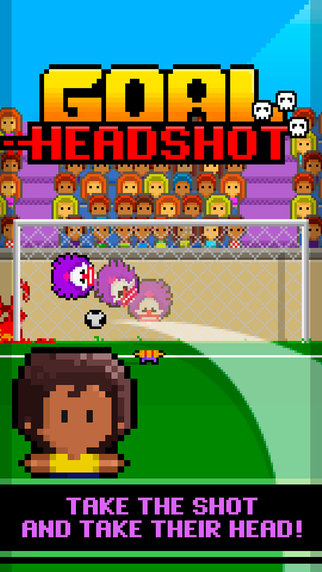 Headshot Heroes may seem like a sports game like many others but looks can be deceiving. Very deceiving, in this case.

In Headshot Heroes, published by Chillingo, players will have to pass the ball around a football field by tapping the screen and then shoot it at the goal not to score but to decapitate goalkeepers. Each goalkeeper included in the game has a different head which will become part of your collection once it has rolled of the owner’s shoulders. Collecting heads will also allow players to unlock different teams made up of very peculiar characters like cats, ghosts and more so there’s a reason for all this over the top violence.

Despite its gory premise, Headshot Heroes is not a gruesome game by any means. The game’s pixel art graphics make it very difficult to take everything that goes on in the game seriously.

Headshot Heroes is now available for download for free on the App Store. Make sure to check it out if you’re looking for a new sports game with an interesting twist to play on the go.