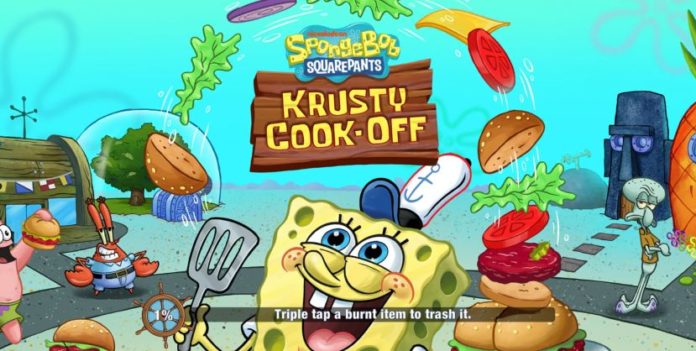 In pure time management fashion, you main goal in the game will be that of serving an ever-expanding array of dishes to your customers, making sure that they’re always served in time and happy. Because happy customers help you make more money – and you need money to build a better restaurant!

Produce food at all times

One of the main things that you should pay attention to is that all the things that produce food (or drinks) are working at all times.

Make it a habit to quickly restart production of any given food item as soon as you pick one up, otherwise you will find yourself in a really difficult situation sooner rather than later: even with most upgrades purchased, producing food is relatively slow and if you happen to run out during a massive influx of customers, things can get really ugly.

So make sure that at all times, you have all your plates full and all the items that produce materials for your dishes are working at full capacity as well!

Even if your foods get burned, it’s still better than not having food there at all – you can quickly dispose the burned food and if it ended up burning because you had the plates full, it means that you don’t need that food in that particular instant, so you’re still saving time!

Your customers start losing their patience sooner rather than later, but giving them one of Grandma’s cookies will make them happy. So make sure that you are always producing those cookies and using them at the right time!

Happy customers are not only needed for completing some of the missions in the game, but they also leave more money on the table: and you can never have enough of those!

So always keep an eye on the green happiness bar next to each of your customers and if it gets dangerously low (but not sooner), feed them one of Grandma’s cookies.

Focus on getting the food upgrades

You can purchase various upgrades for your restaurant in the Barg N Mart, but your main priority – especially early on, should be the Kichen upgrades as these directly affect food production.

The things that you need the most are food capacity and fast food production. Therefore, in a place like the Pancake stand, the Coffee Machine, Pancake Griddle and Plates are extremely important.

However, you also need money to afford those upgrades and those are obtained by leveling up the various ingredients you use for your dishes.

While the main focus should be that of maxing out the capacity and food production speed, every now and then you should also invest in those items that increase the prices just to keep up with the rising costs.

IMPORTANT: As long as you have the resources, you can work on unlocking multiple upgrades at the same time, so don’t do them one at a time!

You also have various other items that help you, but to a lower degree: the Interior items and the Decor ones. The former will increase the money you are making in each level (although just by a bit), while the others only increase the amount of pearls you have, which are needed to open chests.

Therefore, we can say that these two things shouldn’t be your main priority when it comes to upgrades and you should only get them after you’re perfectly happy with the Kitchen upgrades in SpongeBob: Krusty Cook-Off.

Tips for keeping your customers happy

As I said earlier, keeping your customers happy is extremely important and fortunately you have a few extra tricks that you can use to keep them in the green without always resorting to Grandma’s cookies.

It all basically sums down to you being able to micromanage your customers with care and make sure that you serve them in the right order, so that you not only keep them happy but also increase the coins earned through combos.

First of all, you should always wait for at least a couple of customers to appear, then start working on serving them in such a way that they are always happy, but you also complete the orders one after another so that you get combo points.

When you have three customers waiting, plan the dishes you have to serve them and start serving them, beginning with the one with the biggest order (highest number of dishes or the most difficult ones to prepare).

It’s also extremely important not to complete an order, then move to another if the other orders require multiple items (and especially if you don’t have them ready).

Instead, prepare an item from each order, serve that to your customers, starting with the least happy one, then move on to delivering the rest of the order. Whenever you fill part of the order, a customer’s happiness increases a bit, giving you more time to deliver it fully.

While you don’t have a direct control when it comes to sending a particular dish to a particular customer, you can still have some sort of control by preparing dishes in the right order, having in mind that the game will always serve the customer with the lowest happiness level, as long as you have the right dish they want.

But you can also make things even easier by simple preparing a simple pancake, a pink jelly one and one with blueberries on top. You have options, so take advantage of them!

Doing this, you will reduce the chaos in the restaurant a little bit, while also making sure that you’re getting the most coins possible, and that you’re keeping the customers happy.

No matter how careful you are with everything, the chaos in the more advanced levels of SpongeBob: Krusty Cook-Off will end up with you messing up a dish or burning something.

For burnt items, tap them twice to remove them instantly; tap three times over a dish in order to remove it from a plate.

While you can definitely speed things up a lot in the game by spending real life money for all sorts of premium bundles and advantages, you can also watch ads for various boosts that will make your life in SpongeBob: Krusty Cook-Off a lot easier.

Every now and then, you will be allowed to watch a video ad for increasing the amount of coins or smiles you received from completing a level – and that’s an offer you should take advantage of, as it is really worth it.

You can also watch ads to speed up the delivery of various products you upgrade, to get free Gems or to get Grandma’s cookies for free. Make sure to take advantage of these offers every now and then to make things easier for you (and also reduce the number of regular ads that the game shows you).

I mean, in the end, if you’re watching an ad anyway, at least get something out of it!

Use boosters if you can’t beat a level

Boosters are extremely useful, but also extremely expensive and difficult to get. Therefore, you should always use them when you really need the advantage they offer.

And this is usually when you’re trying to beat a really difficult level – eventually one that you have tried already and failed. This is when those boosts can come in handy and are worth their money!

Although, truth be told, in such cases, you might wat to look at the items you can upgrade in your restaurant, as those could help too!

The more and the better you play, the higher you will go up the rankings in the game and evntually you will have enough smiles collected to unlock the championship.

In order to unlock it, you need to beat the highest score in the league behind the Championship and you do that simply by beating levels in the game and collecting as many smiles as possible (from happy customers).

Once you are in the Championship, make sure to be extremely active and bring your A game, because there are a ton of great rewards to be won (mainly free Gems), but you are also competing against real life players who are equally motivated to win.

There’s more to the game than pancakes!

Despite the chaos of each level and the insane speed of the game, you might end up getting a little bored with the regular pancake cooking game. But fortunately, there is a lot more that the game has to offer!

Once you complete the pancake story, you will move on to The Krusty Krab and then Sandy’s BBQ. These new areas will come with brand new challenges for you and you’ll always be entertained.

These would be, for now, our SpongeBob: Krusty Cook-Off tips and tricks. Do you have additional advice to help fellow players? Let us all know by sharing your comments below.