Rayark, the studio behind hit games like VOEZ and Cytus, have released their first competitive strategy gmae: Soul of Eden! In this real-time tactical card game, players will build a deck full of units from one of the four main factions, each with their own unique strengths and abilities, then duke it out with other players around the world in heated PvP matches!

In Touch Tap Play’s Soul of Eden tips and tricks guide, we will go over the basics of deckbuilding and a few basic strategies for the starting faction. Let’s get started with our Soul of Eden cheats, tips, and tricks strategy guide to build a great beginner’s deck!

Welcome to Soul of Eden, the competitive real-time card battler. This game plays similar to games in the Clash Royale genre, where two players wait for their soul power to recharge and then play cards to deploy their units out into the battlefield.

After you complete the tutorial, you will have a pretty good grasp on the basics of the battles and the deckbuilding aspect. You may eventually come to crossroads where you will ask yourself if a certain card is good for your deck.

Well, to help you get started, here are some basic guidelines for building your deck!

Remember that there are four rarities: common, rare, epic, and legendary. The higher the rarity, the less copies of the card you can place into your deck. For example, a deck can only have one legendary card in it at all times.

When building your deck, you kind of want to have a general idea in mind. A good starting point is to have a general strategy of using certain units that synergize well with others, and a good way to brainstorm ideas is to look at the card classes.

Each card has a “positioning” type, which more or less means what role the card has. There are four roles: attack, defense, support, and balance.

Attack cards are straightforward, no-nonsense damage dealers. These units are your highest DPS cards, so building your deck around them is not a bad idea.

Defense cards are tanky frontline units that are slow and bulky. They may not deal much damage and they take a while to get to where they need to be, but they make up for it with lots and lots of health. Position them in front of your attack units to create a formidable force!

Support cards are the backline units that buff and support your other units, which includes healing and buffing. Support units are usually very fragile so they must be deployed strategically, but a well-timed support drop can easily turn a battle around.

Balance cards are all-around units that do not specialize in anything specific. They tend to have rounded out stats and they can fill in just about any position if you need them to.

Until you get a few matches under your belt, you will be stuck playing as the Republic faction for the early stages of the game. The Republic is a futuristic faction that has a nice balance between offense and defense.

Your basic units are the Marine Corps. While they are the basic attack units of the Republic, do not underestimate them – a whole squad of these guys can do some serious damage if left unchecked.

A general Republic strategy is to first deploy a defense unit, like the Sentinels, Riot Troopers, or Pulse Tanks, so that they soak up the damage and allow the Marine Corps to deal some big damage.

The Sentinel is a decent and cheap defense unit, so you will be using it the most. When you have enough soul power to do so, a Pulse Tank can give your assault squad a massive push, because when it is deployed it creates a brief shield around it – any units within the shield take 50% less damage for a few seconds.

If you are playing against an aggressive opponent, the Defender might be a good solution. Unlike the other defense units, the Defender is a stationary turret that does not move. However, its passive ability makes all nearby units take 35% less damage and deal 35% more to enemies, making it a great counter to offensive assaults from your opponent.

For legendaries, we like Triton. When deployed, all nearby units deal 35% more damage for ten seconds. His active skills allows him to heal all nearby units for a moderate amount of health, making him perfect to pair up with a strike team of Marine Corps, Snipers, or Rocketeers.

The Republic has some great spells as well. AP Strafing is a fantastic counter-push spell that lets you deal heavy damage to a big wave of units, usually taking them out on the spot. If enemies do not go down, AP Strafing also inflicts a debuff that makes them take more damage for a few seconds.

In addition to that, Bio-field is a support spell that can help you heal up a wounded squad of your own to keep up the fight. Using both the Bio-field and Medi-bots is a great way to keep a squad healthy, though it is costly, so make sure it is worth it!

Play the Arena for Deck Ideas

After you have acquired a few battle points, you will begin to unlock additional modes, one of which is the Arena. Despite the name, the Arena has a set list of challenges for each faction, designed to introduce you to the faction’s playstyle.

The Arena is a great place to learn the in’s and out’s of a faction, and we highly recommend that you take some time to complete the challenges. You unlock the Republic set of challenges at first, but when you get more points you will unlock the rest of the factions.

You do not unlock a faction’s set of Arena challenges at the same time you unlock the faction itself; you must earn some more battle points before you do. But once you do unlock them, be sure to play through all of them before you start building a deck for that faction.

Wish at the Waterfall of Time

You can toss soulstones into the Waterfall of Time to be rewarded dust for upgrading cards, among other rewards. You can do this up to four times a day, with the rewards increasing the more you do it.

You unlock the Waterfall of Time at 100 battle points, which will happen pretty soon. Dust is useful for upgrading units when you do not have enough copies of the cards, so we recommend wishing as many times as you can in a day.

Play in the Playground for Soulstones

The Playground is the home to alternate game modes. You can take part in some wacky and fun modes, like double soul energy battles and more.

There are also limited time game modes that add special modifiers and effects to the game. We recommend trying them out at some point – not only are they fun and different from the regular matches, but you also get separate rewards from them.

You can get lots of soulstones from here, so if you are ever short you can come here for a quick pick-me-up. Since you need them for the Waterfall of Time, be sure to get your rewards before the next cycle.

You see, the Playground modes are only around for a limited time (aside from the double soul energy mode), and when they reset so do the rewards. Make sure to come back every now and then and get the full set of rewards!

That’s all for Soul of Eden. If you have any other tips or tricks to share, let us know in the comments below! 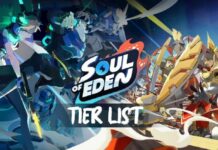 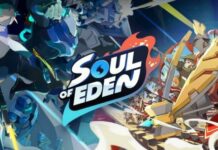