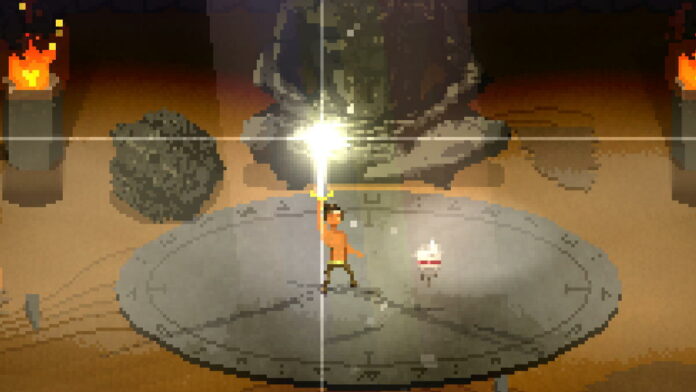 Join accidental hero Roq Epimetheos and his little robot buddy Jib on a planetary expedition! Songbringer is a top-down action adventure game that is very reminiscent of Nintendo’s The Legend of Zelda series. With no means of communication with their ship the “Songbringer”, Roq and Jib must explore the planet they have crashed landed on in search of a way home!

In today’s Touch Tap Play guide, we will go over the free demo version of the game. The free version allows you to clear the first set of dungeons, and we will guide you along the way. Let’s get started with our Songbringer cheats, tips, and tricks strategy guide to clear the starting dungeons!

The game will begin properly after the prologue that explains how Roq and Jib end up stranded on the planet below the Songbringer. There really is no tutorial or anything, so we will help you get situated here.

You can move Roq around with the virtual directional pad at the bottom left corner of the map. Next to the virtual pad is the map, which is presented with a grid.

Your action buttons are on the bottom right corner. The big button lets you swing around the Nanosword, which you can also charge by holding down the button for a brief moment. Let go to perform a powerful spin slash!

The left button is your Top Hat Drone. Tap it to toss it forward where it will deal light damage with anything it collides with. It will return to you like a boomerang, and you can also use it to grab distant items.

The middle button is the Matter Bomb. Tap the button to drop the matter bomb on the ground, which detonates after a few moments. You can use these to inflict big damage on enemies or destroy obstacles, which you will need to do in the first dungeon.

The top button is the Blink Orb, which lets you blink in and out of tangible reality. You can use this to get around faster and to dodge attacks, but you need good timing.

The top most button is Cactus Flesh, which acts like a healing item. Use these when you are in a pinch to keep on fighting!

(This Songbringer guide was first published on Touch Tap Play)

Due to the randomly generated nature of the game, your dungeons will probably be in a different location than ours. The dungeons are marked with blinking green dots on your map, so navigate your way there.

If you find a dungeon entrance that is backed against a bunch of tall rocks, you have found the entrance to the first dungeon, which is a more traditional dungeon.

The second dungeon entrance is surrounded by four symmetrical rocks, with two on each side of the entrance. This dungeon only features a boss fight, so we recommend saving it for last.

The path to the dungeons may be blocked off by random debris, so you may have to work your way around through a different way.

Getting Through the First Dungeon

The first dungeon of Songbringer is relatively simple, as one can expect. The layout is pretty straight forward and there is only one key room that you need to know, and that is the room containing the keycard.

The keycard is required to access the rest of the dungeon, so you will need to use a Matter Bomb to destroy the obstacles blocking the keycard. From there it is smooth sailing and you should be able to find your way to the first boss with no problems.

The first boss is a giant demon wielding a massive hammer. He moves pretty slow, so you should be able to use the Blink Orb to get in and out really fast.

The giant really only has two attacks, and the first one is to hammer slam in front of him. This attack has a long wind-up time so you should be able to see it coming and get out of the way fast enough.

The giant’s other attack has him stomp the ground really hard that random Matter Bombs will fall from the ceiling. Just stay away and wait for them to detonate on their own. The best part about this attack is that the giant can be damaged by the bombs he drops on you!

A good tactic to use is to charge up an attack, run up to him and unleash it, then run out before he can hurt you with his hammer. Do this enough times and he will fall, rewarding you with a courage shard.

At this point, the demo will “end,” but that is not all there is to do! Reload your save and you will be teleported to the entrance of the first dungeon. Head outside – there is still more to see!

You can start exploring the rest of the overworld now that you have conquered the first dungeon, or you can go straight for the second dungeon to fight the massive dragon boss.

Dungeon 2 is located at whichever green dot you did not go to the first time around. You should not have a problem finding your way there, but just remember that you may have to go around various obstacles to get to it.

Dungeon 2 only has one room in it, and it houses the massive ice dragon boss. As soon as you enter the room the dragon will appear from the pit below. You thought the giant was huge? You have not seen anything yet!

When this fight begins the massive dragon will shoot a frostbolt at you. The frostbolt will leave a trail of cold ice as it travels and it lingers for a while, so be careful not to touch it! Getting hit at all in this fight will freeze you for a few seconds, leaving you helpless!

After the main dragon attacks, two smaller dragons will appear on the sides of the arena. Damage them as much as you can before they retreat back down, but watch out for the small blue fireballs they shoot at you – these freeze you too!

Once both mini dragons are down, the main dragon will begin to launch more frostbolts at you. The dragon is only vulnerable when its eyes are open, so wait for it to finish launching its frostbolts then go in to attack.

Be careful not to move in too early, because the dragon can shoot up to three frostbolts in quick succession when both mini dragons are down. Be patient, get in as many hits as you can, and the battle should be yours!

Exploring the Planet and Finding the Secret Dungeon

Congratulations! You have technically conquered the demo of Songbringer, but you are still free to explore the planet as you see fit. Despite the game’s warning, you can reload your current save file and keep playing.

You can explore the rest of the overworld, and there is even a secret dungeon waiting for you. We are not sure if this was intentional, but you can actually access the fourth dungeon from the demo version.

Look around for a mountain side that has a large staircase on it. For us, this was around the northside of the map. Climb the stairs and you should see a giant statue of a woman with a dungeon entrance below.

This is the fourth dungeon, at least according to the world map. This dungeon is much more complex than the other two, as you will have to travel between floors to get around. There are many paths and dead ends, so you will have to explore the dungeon fully.

Explore the dungeon until you come across a massive, mysterious door. In order to open this door you will need to find a secret room full of enemies, as it houses a special switch that must be activated.

You may come across a Bio Scanner item somewhere in the dungeon. This item will mark rooms that are crawling with enemies on your map, so seek this item out if you are having trouble finding the hidden room.

Once you power the switch and open the giant door, head back and enter. Inside you will find the giant slime boss, who is not particularly challenging. The boss does not really have any attacks – it simply bounces around the room frantically trying to bump into you.

As long as you stay mobile you should have no problems dodging the giant slime. Damaging it enough will make it spawn smaller slimes, so make sure to get rid of them as fast as you can.

Dealing a significant amount of damage to the giant slime will eventually make it break up into three blue slimes. They do not get any new attack patterns, so keep on slashing – if you can destroy all three blue slimes in time, the boss is done.

If you are too slow, the blue slimes will merge back into each other and you will have to damage the big, orange slime again. Use Matter Bombs and charged slashes to ensure you deal enough damage.

And that’s it! Once you have completed this dungeon, you have truly completed the demo. We tried to explore the rest of the overworld, but there are certain obstacles that you cannot pass unless you have the right upgrade, we assume.

So that’s all for the Songbringer prologue. If you have any other tips or tricks to share, let us know in the comments below!