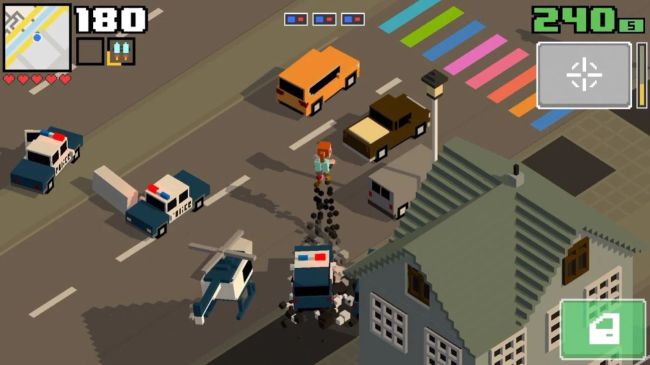 Today we are going to dive into the Smashy Road: Wanted 2 tips and tricks to help you figure out how to ditch the police and gather more characters. As you might already know, this game is the sequel of Smashy Road, which is equally exciting and addictive.

So, without further ado, let’s dive into the Smashy Road: Wanted 2 tips and cheats and discover everything there is to know about the game. We’ll kick things off with a few basic tricks, then we’ll move on to more advanced techniques to ditch the police.

Even though the game doesn’t bother explaining basic mechanics to players, it doesn’t mean that you don’t have various quests and achievements to look forward to. In my opinion you should start by checking out all the available quests.

You can find the quests in the bottom right corner of the screen, under the icon which looks like a gift. Once you open that menu, you’ll see Main Missions and Side Missions, which are equally important. However, the Main Missions are more difficult to complete than the Side Missions.

In order to finish one Main Mission, for instance, you might need to smash a zombie, or perform a stunt. At the start it will be hard to complete these tasks, because you won’t have a good vehicle or character. So, it’s better to focus on the Side Missions until you progress a little bit.

The Side Missions are something like Daily Missions, and they are a great source of currency. I suggest that you give them a read and try to complete them whenever possible.

What you should do:

You can start by completing some easy missions, such as “Total Score” (drive to increase your high score) or “Cash Collected” to save up some money and start unlocking more vehicles.

You won’t be able to achieve some very high high-scores until you learn how to control the car, what roads to take and how to outrun the police (on foot!). Therefore, you should take your time and make mistakes, explore various areas and basically just have fun.

After you played the game for a little bit, you’ll get better at driving the car and avoiding obstacles. So, don’t despair if you don’t nail the chase first try – try again!

You can earn in-game cash by completing missions, but sometimes you might not feel like grinding quests to get a mere $20. So, if you want a couple of other ways to earn extra bucks, you can watch ads.

An ad will take at most 30 seconds, and you can earn some easy $40. I would suggest to do this every time you’re a little short of opening the slot machine, because it’s the fastest solution.

How to Unlock More Characters and Vehicles in Smashy Road: Wanted 2

It’s very simple to unlock more characters or vehicles in the game. All you need is $100 – you can collect the cash from in-game missions and by watching ads. Then, once you have enough money, you can see the slot machine option appear in the post-game lobby.

I suggest that you play the slot machine every time you have enough money for it. That’s the easiest way to unlock Legendary characters and cars. The result is random, so you might have to do multiple draws in order to get a specific one.

From time to time you’ll notice an icon (the icon of the slot machine) pop up, even if you don’t have $100 to play it. Make sure that you always tap on it when that happens, because you will receive a discounted draw.

You got a new, super-duper car, but you don’t like its color. I understand you perfectly – luckily, the game has an option which lets you customize your cars! You can see a garage icon in the bottom left side of the screen. Tap on it and next to the cars that you unlocked, you’ll see a toolbox icon.

Tap on the icon, and there you’ll find a wide assortment of colors to choose from. Also, keep in mind that changing the color of the car is completely free.

But, if you want to upgrade said car, you can do so by using Toolboxes, which cost real money. So, check well which ones you want to do first, before you make any unexpected purchases!

How to Ditch the Police and Get High Scores

If you want to get some high scores in the game, you should learn a few things. Firstly, you should know how to move around the map. You can find various missions in certain areas of the map, and you should try to reach these before the police catch you.

Secondly, you should learn how to change the cars (yes, you can steal cars just like you would in GTA), and when the best time to do so is. Let’s not waste another second and take a look at how to do each of these things:

– Use the map to set objectives

The best way to find a certain objective is to use the map. You can find it in the top left corner of the screen. Then, tap on any spot on the map and your objective will be set. Once you close the map you can see a red arrow pointing you in the direction of your destination point.

When your car gets stuck in a certain area or it’s surrounded by the police, you should run away ASAP. Simply tap on the door button (bottom right) and you’ll be out of the car. I suggest getting on a police car, a bus, a truck or any other vehicle which is fairly quick and sturdy.

Also you can tell which car you’re about to get into by following the green pointer. So, if you selected the wrong car, quickly cancel the move and run!

Sometimes it might help to lose the police by using the river, but if you don’t pay attention to your stamina, you might end up drowning. So, whenever possible, try to avoid water.

When a lot of cars are chasing you, all you need to do is lose them. Sounds easy? Well, it is easy! Take the busiest routes, and the roads which don’t allow multiple cars on. There are a few which cross a river, so use them if you’re in the area.

Otherwise, you can just make quick turns, before the police cars are able to turn and follow you again.

If the angled view is not that great for you, you can change it with a top down view. That could make it easier to see all incoming traffic. Also, taking the turns could be easier in the top down view, because you can see the exact angle of the car.

If you want to change the view point, simply tap on the Settings button and under Gameplay, select te one you like most.

These would sum up our Smashy Road: Warrior 2 guide. Do you know any other useful tips and tricks that you’d like to share with the rest of us? Feel free to drop them down in the comments section below!