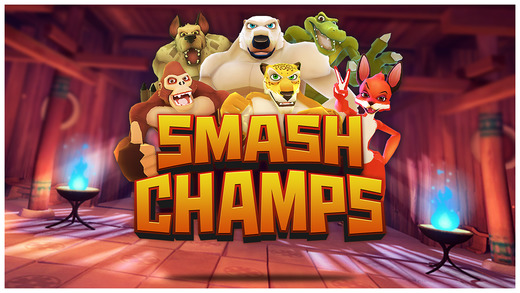 Mighty humanoid animals make the fiercest fighters, turns out! Smash Champs puts you in the role of a trainer as you prepare your champ for combat. It’s a fierce arcade-style Fruit Ninja styled game where training makes all the difference. We’ll show you how to become the best trainer with our Smash Champs cheats, tips and tricks strategy guide.

While it won’t really make or break a fight (although it can if it comes down to the wire!), elemental exploits do help a bit. There are three different elements in this game: earth, fire, and shadow. Earth beats fire, fire beats shadow, and shadow beats earth. During fights, taking advantage of elemental weakness adds around 10-15 power to your overall attack power.

The outcome of a match is determined solely through three factors:

You see, these are all numbers. The sum of all these factors equals your total battle performance, and if it’s higher than your opponent’s, you win! For example, say that your champ’s base power is 15, and you score 150 during training. You also hit the enemy’s weakness, which gives you 10 more power. That’s a total attack power of 175, and if your opponent doesn’t reach higher than that, victory is yours!

If you’ve played Fruit Ninja before, you know exactly where the training mini game comes from. Just like Fruit Ninja, the game considers a combo as one straight slash through multiple fruit. Try making your slashes straight and clean to get those combo bonuses. As you can see from the tips above, the training portion of your total attack power is a huge part, so it’s very important that you score high!

4. When in doubt slash everything!

… but also keep in mind that you get a screen-clear bonus whenever you slash up all the fruit in a single wave. These are just as good as the regular combo bonuses, so try to hit all the fruit! Just watch out for the bombs, though. Those are never good.

5. Unlock a champ from each category!

Although there’s no clear way to tell what you’re going to go up against, it’s best to have a champ from each elemental category so that you have all your bases covered.

That should covered mostly everything. Smash Champs is a rather simple game once you break it down to its core numbers. Remember: the most important part is to score really high during the training sessions! If you have any other questions or suggestions, leave a comment below.