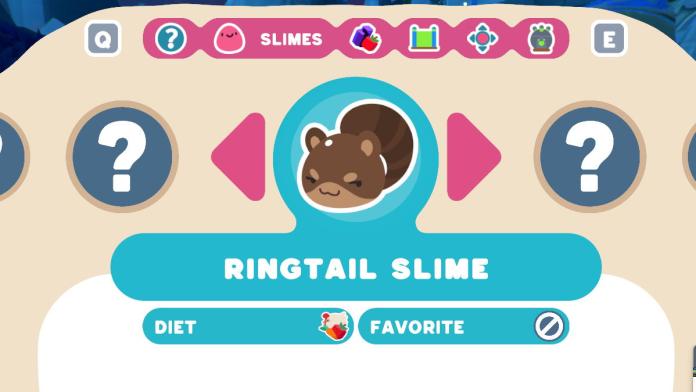 Where to Find Ringtail Slimes in Slime Rancher 2

For starters, Ringtail Slimes can only be found in Starlight Strand, the second region of the game. If you haven’t unlocked it yet, we’ll show you how. In Rainbow Fields, head all the way to the point in the screenshot below.

Here, you’ll find a yellow Cotton Gordo, a Cotton Slime that is larger than usual. When you approach it, it’ll open its mouth big and wide, so you know what to do! Cotton Gordos only eat veggies, so give him Carrots. It took around 30 Carrots for the Cotton Gordo to be full, but if you use the Cotton Slime’s favorite food, Water Lettuce, it’ll take less.

Once the Cotton Gordo is full, it’ll explode into a bunch of Cotton Slimes, clearing the way forward. Go down into the cave and press the button at the end to unlock the way to Starlight Strand, as indicated on your map.

In Starlight Strand, Ringtail Slimes are rare spawns that seem to have fixed spawn locations. We were only able to find one, and it’s located near the crossing between the blue and pink grass section.

Related | How do Fire Slimes Work in Slime Rancher 2? – Answered

When you’re going towards the pink grass, you’ll come across a danger sign with a skull on it—hug the right wall, and you’ll find a small alcove with a Ringtail Slime in it.

It’s important to note that Ringtail Slimes have a unique attribute to them—they turn into stone statues during the day! They’ll look like the picture below if you’re hunting for them during the day, so it might be a little easier to find them if you wait until night.

Once the sun has gone down, the Ringtail Slimes will break free from their statues and wander around looking for food, just like any other Slime. Ringtail Slimes are always hungry, and they’ll continue to eat even if they’re full, which will result in no Plort.

That concludes our guide on where to find Ringtail Slimes in Slime Ranche 2. If you have any other questions or tips, let us know in the comments below!