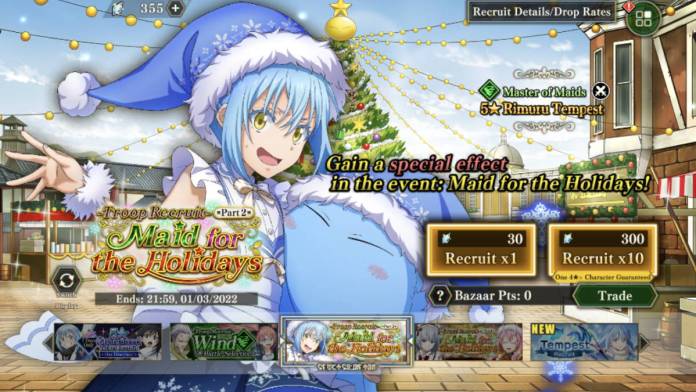 From December 8, 2021, to January 4, 2022, Maid for the Holidays’ second part will be live. There is exactly one new character to recruit during part 2, and that is [Master of Maids] Rimuru Tempest, a five star, wind attribute physical character.

These are Rimuru Tempest’s stats at six stars, fully awakened and released:

Gift of Magic: Increases all allies DEF and max HP for three turns.

Happiness Illuminate: Increases all allies’ guard power for one turn. Additionally, increases Soul of Skills damage until the end of the battle.

Rimuru Tempest’s character trait is Effect – Critical Rate UP. Whenever he is affected by Guard Rate UP, his critical rate increases at the start of a turn. This trait is available in support formation.

Every time you recruit during this event period, you’ll earn bazaar points equal to the amount of recruits you performed. So, a Recruit x1 will net you one bazaar point. You can exchange 200 bazaar points for Master of Maids Rimuru Tempest. Although, keep in mind that this comes out to a whopping 6,000 Magicrystals.

If you’re lucky enough to nab MoM Rimuru Tempest, you should place him in your troop, as you’ll earn more Jingle Bells from the Maid for the Holidays event quests. You’ll gain even more if they’ve been awakened! This is a great way to amass lots of Jingle Bells to help you upgrade the event character.

Aside from this, there isn’t really much else to part 2. Keep doing the holiday event quests for more Jingle Bells, and try your luck at acquiring Master of Maids Rimuru Tempest!