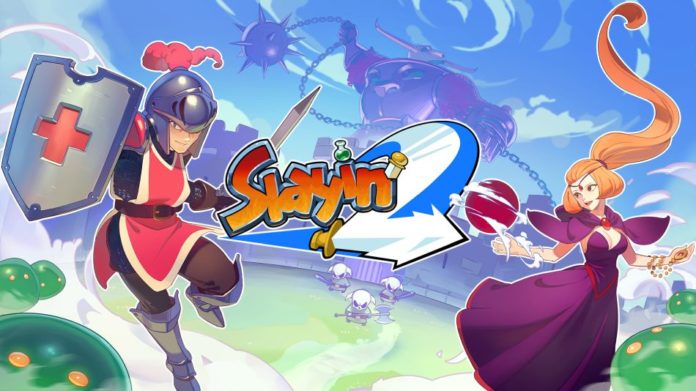 I will admit it from the start: the main reason why I decided to give Slayin 2 a try on the Switch was the fact that it offered a co-op mode and I simply couldn’t say no to spending a few hours with my son slaying monsters and having fun.

With its retro vibe and relatively family-friendly violence (if there even is a term like that), I considered Slayin 2 the perfect game for my 7-year-old to make the switch from Mario Party to something more serious. And fortunately, I wasn’t wrong. We both loved it like crazy.

Sure, this is officially a game recommended to everybody age 10 and above, but my son still handled it pretty well. I personally believe that the restrictions come from the actual difficulty of the game, not the violence which, truth be told, is comparable to your regular Lego game or Minecraft. Or at least that’s how I feel.

But I digress… the conclusion that you have to draw from the beginning is that Slayin 2 is a perfect game to play together with another person. I actually consider it much better in co-op that in single player mode, being more fun and rewarding.

The game itself is definitely not the most complex you have ever played: not story-wise, not gameplay-wise. But despite its apparent simplicity, it is very challenging and entertaining, always keeping you on your toes.

Each stage itself takes place in a one-screen environment, divided in two lanes: one above, one below, each flooded by various types of creatures and enemies that love making your life difficult. And each stage gives you one final challenge at the end: an increasingly difficult boss fight.

You only use a few buttons to control your character (left, right, jump, switch lanes and use your special attack). Even the basic attack is done automatically, in a frenzy of movement from left to right, trying to dodge incoming attacks or monsters appearing from everywhere, while slayin’ as many as possible.

It is deceptively simple, though, as you will see for yourself: despite everything happening on a single screen, you never have a moment to catch your breath – be it in single player or in the co-op mode. It’s non stop action that requires a bit of skill and dedication if you want to end up the level successfully.

And many times you won’t, especially if you play it with a seven years old guy as your sidekick, let me tell you that…

There are some minimal RPG elements in the game: you have a village that was pillaged and must be rebuilt, and you will actively be part of that. There, you will get to buy new weapons for your character, recruit new adventurers to play as, upgrade your weapons and so on.

Every new character or weapon has something to make them somewhat unique – a special move or special attack of sorts that can be activated in certain situations, giving you more or less of an advantage when you play.

Again, nothing out of the ordinary – nor too complex or complicated – but it’s always good to have multiple options and different possible approaches to your missions which, in some cases, will have to be completed again and again in order to become strong enough to keep on going.

Yes, there’s quite a bit of grinding involved in Slayin 2 and you can see that the original game was actually released on mobile. While I haven’t played the original when it was launched several years ago, the sequel definitely feels a bit like a mobile game here and there.

The grinding, especially when you have to complete the same stage over and over again in order to get enough resources to upgrade your next weapon or unlock a new character in order to be able to progress, is never fun. Nobody really likes that, no matter how intense the battles are and how fun they seem. You do get bored eventually and there’s no sense of accomplishment in doing the same thing over and over again.

I understand that this is made to increase the difficulty level and the time you spend playing the game, but it’s not ideal. It is what it is, though and still not a massive deal breaker. Plus, my son seemed to enjoy the grinding part a lot more than I did so probably it is a matter of preference in the end.

The graphics make the game extremely enjoyable, in my opinion. The pixel art style is something that I definitely enjoy and Slayin 2 does a good job delivering consistent eye candy to the player. There’s really nothing to hold against the game in this area.

Despite the minor annoyance that I feel from the need of grinding for progress, Slayin 2 is a really good game. I know for sure that both kids and adults will enjoy it equally, and for its price, the game can be considered a steal.

It is fun, fast paced and challenging, offering just enough to keep you satisfied and not asking for more, but not too much so that you feel overwhelmed and tired because of the ton of options available. It’s that type of game that you can play for just 5 minutes or 5 hours in a row and not feel the difference.

Go ahead and get it from the Nintendo Game Store if you haven’t done so already.