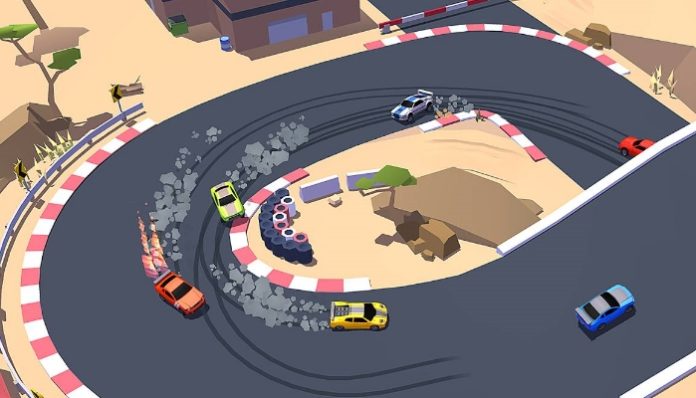 Skid into the fast-paced world of SkidStorm, a realtime multiplayer racing game! Practice your skidding skills in the single-player Career mode, then jump online and challenge the world!

With simple controls and easy to learn but hard to master gameplay, SkidStorm is the perfect racing game to play on the go. Our SkidStorm cheats and tips will show you how to get ahead of the pack and also share with you the answer to the burning question: which is the best car in SkidStorm?

Like most racing games, it’s all about steering and control in SkidStorm. Our SkidStorm cheats, tips and tricks strategy guide will show you how to take turns like a professional!

True to the game’s name, you’re going to be spending most of your time on the track skidding or drifting. Whenever your car starts to skid, your turning power gets wide and with proper control you can take some turns pretty efficiently.

Not only that, but you also build the boost meter, as seen at the bottom of the screen. The longer you skid, the more boost you build.

Here’s a neat trick to keep in mind: when you’re coming out of a curvy turn, you can actually preserve your skid by slightly tapping to make small steering corrections.

This ensures that you keep your skid because you’re still turning while making sure that you don’t go careening off the course because of over-steering.

So, as you can probably guess, masterful and efficient skids is the key to beating those crown challenges. You’ll need to skid a lot to take turns well and build boost faster to get yourself through the track much faster than usual.

Don’t worry about the crown challenges at first!

When you’re playing through the single-player career mode, you’re going to quickly notice that the crown challenges are pretty difficult to beat, especially if it’s your first time on that course.

We recommend not even worrying about the crown challenges at first. You may be skillful at skidding and boosting, but your car might not have the raw horsepower to power through fast enough.

You get diamonds for beating each level of crown challenge, and while this is very helpful it’s usually much too hard to get it on your first run through. Come back to the track once you’ve gotten some upgrades for your car, and you’ll see just how much easier it gets!

If you can’t manage the crown challenges at the time, you should focus on getting all three stars. Getting first place in a race automatically nets you all three stars, and this is important because you get a parts chest afterwards.

Parts chests contains – you guessed it – new parts which you need to unlock new cars. You can also buy the parts you need outright with diamonds if you want.

Race through Multiplayer before you tackle Career Mode!

You can play against human players in real-time using the Multiplayer Mode. You should play this mode first before you do anything else.

The reason being is that as you climb up the league ladder, you’ll receive locked chests exclusive to Multiplayer mode. To unlock these chests, you’ll need to use keys. You can have up to five keys at a time and they automatically recharge after a couple hours.

As you can see, to ensure that you’re constantly getting new chests (which means potentially new car parts), you’ll want to spend your keys first before you work your way through Career mode.

In order to master a track, you have to play it over and over again since practice makes perfect. This will help you find the shortcuts and best paths to takes in order to achieve victory.

Usually, the easier paths are generally taking more time, so you should always look to master the ones which are more difficult to execute, because that’s where you will gain an advantage.

Of course, you won’t be able to do this as soon as you start playing a track, but as I said earlier – practice makes perfect, so try it over and over again until you become a master.

Learn when to use Nitro

Using your car’s Nitro boost at the best time makes the difference between a race you’ve won and one you fail miserably.

Well, I might be exaggerating a bit here, but the truth is that Nitro is indeed extremely useful and using it at the right moment will give you a massive advantage in the game.

The best time to use Nitro in SkidStorm is when you are in a straight line (or an easy to drive area). If there are no obstacles around (and ideally no cars to bump into), you’re good to go and ready to burn some rubber to give yourself an advantage.

There is a total of 17 cars available in the game at the moment, and you unlock a new car by leveling up.

Note: Cars have been added constantly since the game’s original release, and there is now a set of 25 vehicles available for you to drive. We’ll update the article soon with the latest information on the newest cars.

Parts for the cars are extremely important as well, because that’s what makes your car in the end, and that’s where the real challenge comes from, since you can only get them from crates or by paying real life money for them.

Here is the list of cars available in the game at the moment:

What’s the best car in SkidStorm?

Although becoming a master of a track is extremely important when it comes to winning all your races, things get a lot easier when you are driving the best and fastest car around.

Deciding which is the best car in the game is difficult, because there are so many variables to consider. By default, the later you unlock the car, the better it is in terms of overall stats.

But when upgrades come into play (and they’re generally random thanks to the boxes that you have to unlock, things are more difficult because each player will have different cars and upgrades available).

But if you could pick, I would say that the best bets would be for choosing the following cars as the best in the game:

1 – Hornet, as it’s the first decent car that you unlock early on in the game.

2 – Sabre and Falcon, as these are unlocked later on, have amazing speed and general stats and will definitely rock on the tracks. These are good to have in later game stages, for more advanced players, so definitely worth focusing on once you have them (and I consider them equally good, to be honest).

Watch ads to gain an advantage

Like most free to play games these days, SkidStorm also gives you the option to watch ads for all sorts of boosts in the game. Take advantage of these offers, especially when it comes to opening boxes as you definitely need as many car parts as possible!

The daily challenge is a fun way for you to increase your mastery level on a specific track and earn a massive reward at the same time. So make sure to take advantage of this as well.

In order to beat a daily challenge, you will have to defeat an AI-controlled vehicle by driving a random car (which can be one you haven’t unlocked yet).

The good news here is that the tracks you play on can be replayed over and over again until you win – so make sure to always start with this and grab that win to bag the reward and increase your proficiency on that specific track.

That’s all for SkidStorm! If you’ve got any other tips or tricks to share, let us know in the comments below!