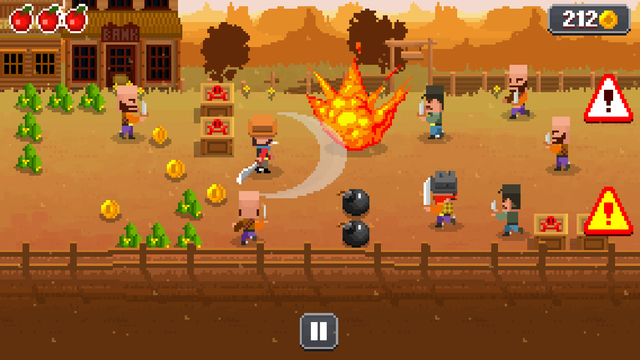 A new arcade game is now available on the App Store, a game that will bring you back to the Wild West to shoot down people and prove that you are the best gunslinger that has ever graced the planet.

Wild Wild West, developed by Pine Entertainment, is a pretty simple shooter game where players will have to move their character around with a virtual d-pad and avoid enemies, obstacles and more while shooting continuously. After defeating waves of enemies, Wild Wild West will challenge players with stronger boss enemies, which require even more care in evading obstacles and dangers.

Luckily, Wild Wild West never becomes too difficult, thanks to the upgrade system which allows players to upgrade shooting and movement speed, gun damage, health and more. Unfortunately it’s not easy to get the needed coins to purchase upgrades, as the enemies don’t drop enough of them, so you will have to use real money if you want to do some heavy upgrading.

Wild Wild West is a really simple but engaging shooter game made even more charming by the old school presentation. The game is now available for free on the App Store so make sure to give it a spin, you may be pleasantly surprised by its quality.