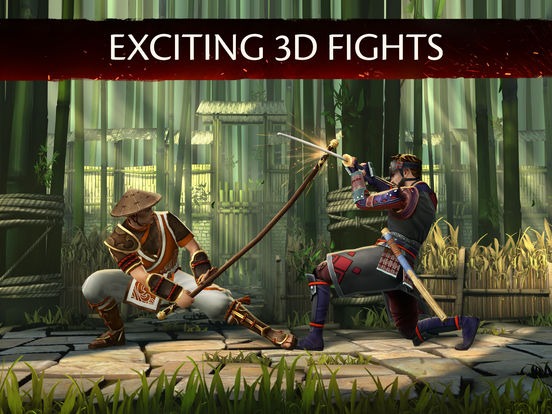 Shadow Fight 3 is a high fidelity fighting game with intense graphics, awesome actions, and lots of customization. You play as a Shadow Warrior who can tap into the dark powers to wield powerful magic. You are also trained in all sorts of weapons, so customize your hero to your liking and fight your way! Our Shadow Fight 3 cheats and tips will help you become the ultimate shadow warrior.

Shadow Fight 3 is a pretty deep game, so there’s a lot to cover. Let’s get started with our Shadow Fight 3 cheats, tips and tricks strategy guide!

Each weapon type handles differently from the rest of them. It’s up to you to get a feel for your weapon, but they kind of follow the general rules. For example, swords are light and quick, axes are heavier but stronger, and so forth.

Try to get a good handle on your weapon, because you’ll need to use specific moves to get specific results. Remember that holding a direction will alter your attack in some way; holding forward while punching will perform a different attack than neutral punching. Once you know how to perform all your moves, you’ll be ready for any situation!

If you want to get far in Shadow Fight, you’ll need to master your defense as well as your offense. As you learned in the tutorial, blocking is performed by simply standing still. Blocking is incredibly important in this game, as it’s all about counter attacking. To oversimplify it, a regular match is going to flow like this: you throw out attacks or wait for your opponent to attack, block accordingly, then counter attack when you have an opening.

The reason why we mentioned that you should get a feel for your weapon earlier is because timing is key to successful counter attacks. Even when you block an attack string from your opponent, if your attacks aren’t faster than theirs then you still might be interrupted when you attempt a counter attack.

Weapon speed and timing is crucial to breaking through your opponent’s attacks and defenses. Remember too that grabbing is also option, as this nullifies any kind of retaliation. Just be careful as you need to be right up on your opponent for it to connect!

Shadow Attacks, when used properly, can be game changers! Don’t just mindlessly throw them out – your opponent might be waiting to react to them. Keep in mind that both fighters can see how close they are to using their shadow attacks. Shadow attacks are unblockable, however you can interrupted if you’re hit!

Shadow attack cooldowns start the second you use them regardless of them actually activating or not, so be careful. Try to trick your opponent and throw it out when they’d least expect it.

Leveling up is useful, but the majority of your power spikes will come from getting new equipment and upgrading your existing gear. You’ll need to gain more copies of gear to upgrade so you’re going to need all of the chests you can get!

Do Side Quests for extra experience!

If you’re having trouble with the current story mission and you don’t feel like fighting other players, why not do a Side Quest? These missions are somewhat short but they still offer a good amount of rewards for completing them. They’re also a quick way to earn some extra experience points, so if you’re on the verge of leveling up you can complete one side quest for that last bit.

That’s all for Shadow Fight 3! If you have any other tips or tricks to share, let us know in the comments below!