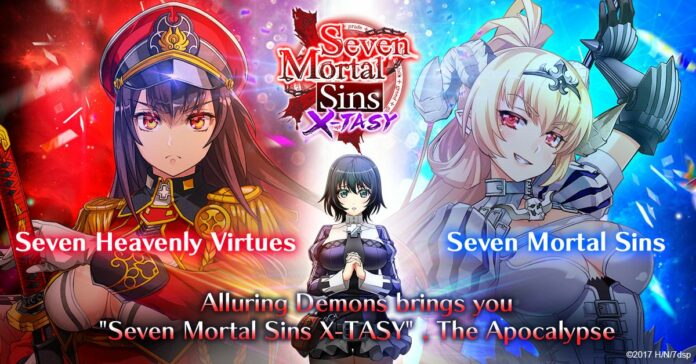 This article is sponsored by Seven Mortal Sins X-TASY

If you’ve ever put some time into a gacha-RPG before, you’re already familiar with a decent chunk of the gameplay loop in Seven Mortal Sins X-TASY.

Like the vast majority of its genre stablemates, Seven Mortal Sins X-TASY is a complex beast, combining the combat of a turn-based strategy game with the sheer depth and complexity of a traditional RPG.

It throws some new ingredients into the mix, too. But don’t panic. This handy guide will set you off on the right course.

Each unit on the screen has an HP gauge (red) and a Move gauge (blue). They also have three different types of attack: basic, power, and special. When all of one side’s HP gauges are empty, the match is over.

To launch an attack you have to tap first on the type of attack you want to perform and then on the target. Naturally, your special has a cooldown, so you can only use it intermittently.

That’s if you choose to play manually. There’s also an ‘auto’ option, which gives the reins to the AI.

The outcome of a battle is mostly determined by how leveled up your Casts are. We’ll get into the vagaries of leveling up later. The other thing you can do to tip the balance in your favor is to finesse your formation.

By tapping ‘edit’ you can swap Casts in and out to ensure that you have the strongest and most balanced possible squad.

In general, that means ensuring that you’ve got a support unit on your team, as well as a balance of attacking and defensive Casts.

In addition, it’s important to pay attention to the elemental affinity system. Each Cast has an affinity with STR, TEC, or AGI, and these traits interact in the same way that rock, paper, and scissors do.

Seven Mortal Sins X-TASY also contains a distinctive helper system. This allows you to assign a Cast as your helper, ready to be brought into battle with the tap of a button if you find yourself struggling.

If you have fewer than the maximum of four Casts in your squad, your nominated Helped automatically fills the vacant slot.

Tactics and luck will only take you so far in Seven Mortal Sins X-TASY. In fact, they won’t take you very far at all. Instead, your progress is mostly dictated by the stuff you do away from battle.

There are several different ways to upgrade your Casts and skills. They include training, ranking up, transcending, and skilling up.

Training comes first. To train a Cast you need to spend Coins, the most common currency in the game, and Trainers. Trainers can have a number of different levels of rarity, and the more rare they are the more EXP they give.

Crucially, rare Trainers don’t cost you anything extra in terms of Coins, so they represent excellent value.

You can rank up your Casts all the way to 6* by spending Evolution Gems. Then comes Transcending, which increases a Cast’s maximum level to 30. To Transcend a Cast you need to spend Transcend Materials.

Skilling up requires you to consume Grimoires/Bunrei and Casts, giving you special moves and more in return.

It’s also possible for a Cast to Inherit a skill level from another Cast in a sort of apprentice/master relationship. All you need is two Casts with the same rarity at or above level 2, and some Diamonds or Inherit Gems.

You’ll also need a steady flow of new Casts to either upgrade or consume. This is where gacha summoning comes in. There are several different types of gacha summon, some of which only unlock after you reach a certain level. Summoning costs Diamonds or Summon Scrolls.

There are still more ways to accelerate your progress, including taking part in events and joining a Guild. Essentially, the more you do, the faster you’ll move.

How you forge a path through Seven Mortal Sins X-TASY is up to you, but this guide should at least put a few handy path-forging tools in your hands.

Try these tips for yourself by downloading Seven Mortal Sins X-TASY now on Android or iOS – just click here.