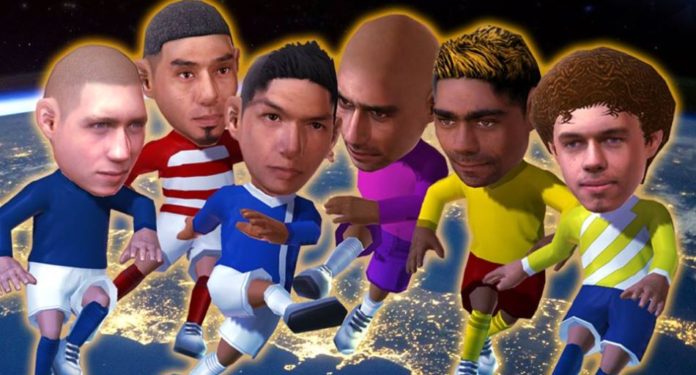 The game offers a solid alternative to football fans who want to built a chart-topping club, but don’t have the time to invest in a complex simulation like Football Manager (also from Sega). With a more casual approach and completely free to play, this is a pretty unique management game that you will surely fall in love with instantly.

But things are even better if you can keep the winning streaks running and your players at top levels – and that’s exactly what we’re going to talk about in today’s article. So, without further ado, here are some SEGA Pocket Club Manager tips and tricks to help you keep on winning!

Red is good!
If you’re just starting to play the game, you might get a bit confused by this at first – just like I did. But, yes, red is good when it comes to the positions of the players on the field.

I was expecting the regular “green indicates the best position” but the game follows a different and confusing set of colors, marking the areas on the field that are the best fit for your player in Red.

Always sign new players
Your scout will find new players each week – some better than others. However, you will most likely find a better player than what you already have in your team and you should sign them, even if they are not ruling the star meter yet.

You will have to fully replace all your starting members (except for the one you select at first and the veteran striker) and ideally you will do this during your first season. 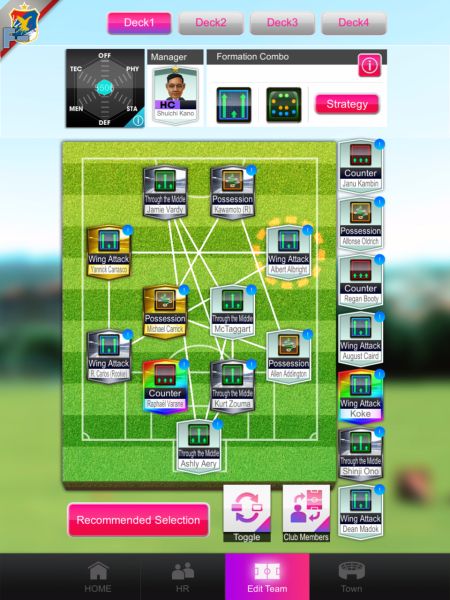 However, wait a little bit before rushing to sign new players: wait until the first actual season starts (after going through the pre-season) because by then you will be rewarded with some premium player draws that will give you some rare players – and you will surely play those as starters.

But once the rewards before the first season are in and you know where your rare players play, you should start recruiting a player per week, replacing the one star players in your squad.

SP Training and Skill Transfer
An interesting feature that takes a bit to get to is the SP training and skill transfer. These two go hand in hand, and they are basically upgrades to your existing players, allowing them to become better than ever.

In order to perform a SP upgrade with your player, they have to reach the maximum level first. Then, you can perform this special move that increases their maximum by 10 levels, but also resets their current level. They basically start over, but get better in the process and have the potential of getting even better.

Once a SP Training happesn, you can perform a Skill transfer in an unlocked slot. This means that you can basically select any player in your squad, consume him, but have him transfer his skill to your player. In other words, a really good way to build those superstars you need – and even lower star players can be used here.

This is why you shouldn’t rush to sell the players in your SEGA Pocket Club Manager squad and instead keep the best ones (or the ones with the best skills) to consume and upgrade your maxed out players.

Only train your starting players
Players level up automatically by gaining experience after each match: starting players earn more XP, while substitues earn a bit less. A player of a high level is usually much better than a rarer player, but of a lower level. This is why you always want your best players to gain as much XP as possible, in order to increase in value.

But you can also train your players even further by using items you are rewarded with after completing matches, and since these items are very limited, you should only keep them for your best players.

Always start training the players with the highest number of stars and work your way downwards from there. I would go as far as saying not to train anything under three stars since you will want, in the end, to have a squad of 4 and 5 star players only.

Set up your Game Plan! 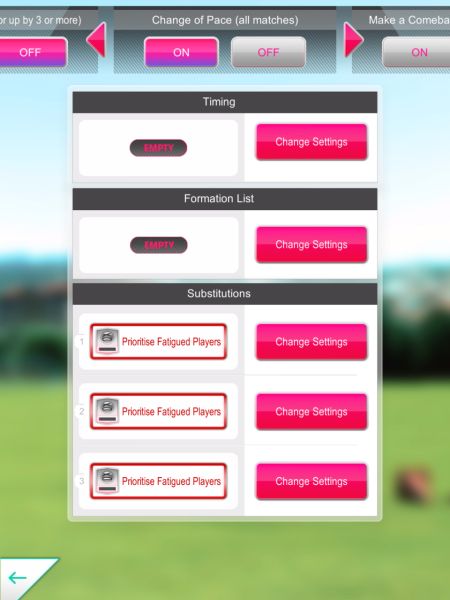 The game tells you about this Game Plan late in the game, but you can set it up early on in order to take advantage of the various options you have on hand with it.

This basically allows you to give some pre-set rules that will automatically apply during the match, depending on the situation. You can give orders on how to change things if your team is leading by 2 goals for example, or if your team is behind. You can also plan out substitutes – so make sure you take the time to set things up properly.

Do take into account your current players and the positions they can play in, because you will not be able to select their positions when the formation changes during a match. Therefore, if you plan to change formations, go for something that will be a good fit for the players you currently have on the field.

This basically allows you to set the important roles in the team (Captain, Penalty Kick taker and so on), but also allows you to select one specific player that will gain more experience. That’s a really important thing to set up in order to prioritize the development of your star players!

Formation and Combos
An interesting concept in Pocket Club Manager is the introduction of Combos that work hand in hand with your selected Formation, players you have on the field and Manager that you have employed.

Basically, each manager can unlock a specific Combo that gives an extra boost of power to your players during the match. Always try to play it smart here and take advantage of these combos as they can make a difference in the match. You can see the combo requirements by tapping the I button above the strategy button in the Edit Team settings: 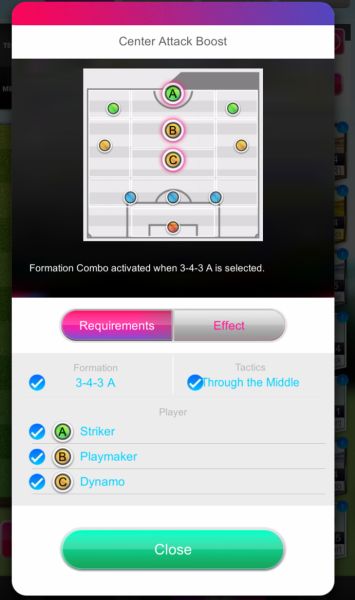 Hiring and changing managers
The interesting thing about this game is that it allows you to hire multiple managers and switch between using one or another depending on the combos you want to unlock, style or formation you want to play.

This means that you should also constantly look out for new managers and try to have one for each tactic in the game (Through the Middle, Counter, Wing Attack etc). Remember that each manager has a preferred formation as well – only hire those with formations that go well with your current players.

Pre-match adjustments
You can make even more tactical changes before starting a match in Sega’s Pocket Club Manager – and know that once the game starts, you can’t make any other changes and you can only look at what’s happening based on your instructions.

The most important things to look at here are these: the Instructions (always choose Focus on Scoring if you’re the stronger team and go with Tighten Defense otherwise) and your tactical advantage over your opponent.

These tactics work based on a rock, paper, scissors mechanic, meaning that one tactic is better against another and weak against a third. If changing this means losing a Combo, it might not be wise to do it – but test it out anyway and see how it influences the strength of your team and that of your opponent.

Complete the daily missions
Each day, the game will give you a set of missions that you should try to complete because this is how you will get a bunch of solid rewards that will help you a lot moving forward.

Choose League based on your team’s value
Whenever you start a new season, make sure that you select the league you’re playing in based on your current team rating. There’s no point in joining a league where you will be defeated over and over again. It’s better to go for a slightly less reputable one, but grab those rewards instead and develop your players faster.

Keep upgrading your Town structures
Once you upgrade your Town, you will have the option to start working on upgrading your money-making buildings there, like increasing your Stadium’s capacity and so on. Make sure that you do this every time you have the required items in your inventory, but don’t go ahead of schedule.

For example, if your stadium is already offering a lot more seats than what you’re currently getting, there’s no need to invest in expanding it – so build something else instead.

Quick Play does the job
When it comes to actually watching the matches, it doesn’t really matter what you choose. You can’t influence anything on the field once the match starts and I personally found that Quick Play works best because it’s the least time consuming option. Yes, the game looks good and you might want to see your players in action, but this also takes a lot of time and you have a ton of games to play.

Bring your face to the game!
An interesting feature of Pocket Club Manager by SEGA is called Footie Face and it allows you to take a photo of your face and use it to create a player that you can use in your team. Actually, you can bring up to three players in your team – but you only start with one. 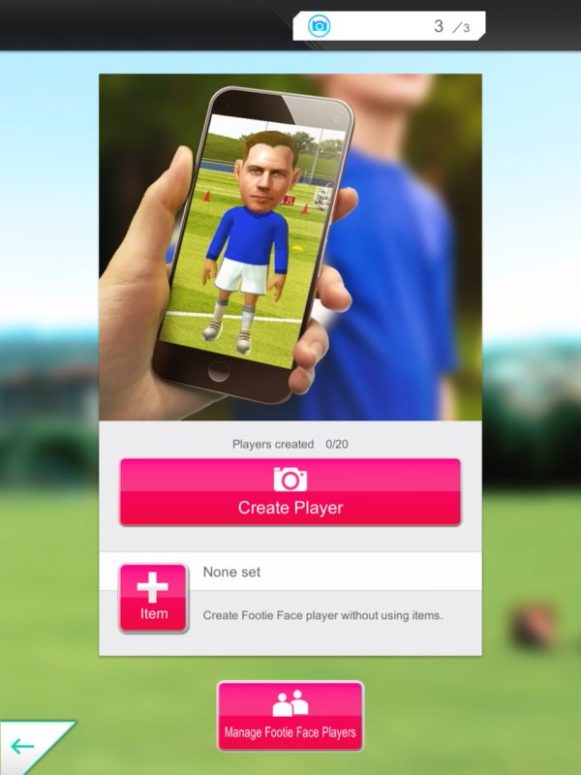 However, even if you can only bring one player, you can create up to 20. And you should create as many as possible, because the next superstar of your team might be just there.

When you create a player using your face (or at least the Footie Face feature in the game), he or she will randomly receive a star rating, a position and skills. You can get a 5-star player using this method, just as you can get a really poor one. You never know until you complete the setup, and the good thing is that you can do this over and over again until you hit the right player for your team.

So this is not just a great in-game feature, it actually proves to be really helpful. So take advantage of it and create some players until you get a 4 or 5 star one and bring him or her to your team as soon as possible, so that you can develop them ASAP.

Mysteries for me: Player Mood and Condition
These two things are constantly mentioned in the game, but I don’t really know what to make of them.

So I’ve decided to just ignore this until I know more. Once I do, I will probably have to take it into consideration when it comes to the players on the field – and so should you.

Also, if you look at the edit team settings, you will see that some of your players have angry faces on their card, while others have happy faces. I have no idea what influences the player mood, as they seem to randomly change no matter if we win, if the player is a substitute or starting player or if I sing my favorite song during the match… Mysteries, I say!

These would be our SEGA Pocket Club Manager tips and tricks for fellow players. The game is pretty complex, that’s a fact, so if you have additional advice to add to our guide, don’t hesitate to do so by commenting below.