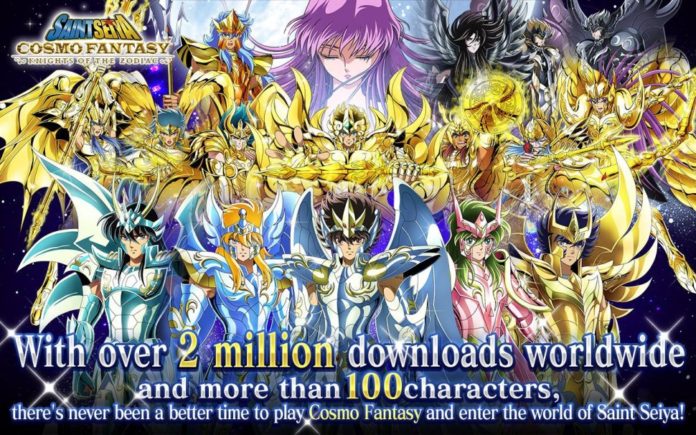 I was extremely excited to see that Bandai Namco has finally launched Saint Seiya Cosmo Fantasy in Western markets. The game was available in Japan, on both Android and iOS since 2016, but it took the company one year to make the transition.

One would expect that, after so much time spend in Japan, the product that we’d get would be an absolutely amazing one: flawless and perfect, exactly what Saint Seiya fans deserve. Unfortunately, Saint Seiya Cosmo Fantasy is an unplayable mess of a game, plagued by connection issues and bugs.

I really tried to play the game, but it does EVERYTHING wrong: it’s that type of a game that, after installing it and playing a bit, it puts you on hold as it downloads a massive chunk of content. I hate this type of games and I want them banished from the world: the entire download should happen when I hit the install button on either Google Play or the App Store. I want to play, not wait!

But I’m ready to get past this if the game is good. Unfortunately, this is not the case. Saint Seiya Cosmo Fantasy is unplayable instead. Unstable, plagued by connection issues and bugs that don’t allow you to proceed… it’s absolutely enraging.

So what is the most annoying bug that I am experiencing so far in Saint Seiya Cosmo Fantasy? The fact that the game becomes unresponsive and none of my taps are recorded by the game. No matter how hard I push or how patient I am, nothing changes and a restart of the game is required.

The loading image in the lower left corner keeps appearing and disappearing, driving me crazy. And after a restart, I can only tap a few times before the whole game becomes unresponsive again and I have to repeat it.

And as if that was not crazy enough, there is even more: I’m also getting the regular connection problems and errors (error 900 in most cases), requiring me to restart the game.

And finally, when everything seems to work, it doesn’t work well. There’s always a huge delay between me tapping the screen and the button I tap actually getting tapped on… or I have to tap it a few times in order for it to work.

I am sorry Namco, but you really blew it with Saint Seiya Cosmo Fantasy. I really wanted to play the game, I really wanted to enjoy the game and it does seem like an interesting RPG from the little bit of gameplay I managed to squeeze in between the moments of rage. But everything else is wrong about it and requires some heavy, heavy fixing.

Hopefully, the diehard fans of the series will be patient enough to wait for an update – which should come as soon as possible, fixing these horrible bugs. Me? I won’t wait that long, I’m sorry. I have better things in life to do instead of raging over a game not working properly. Delete.