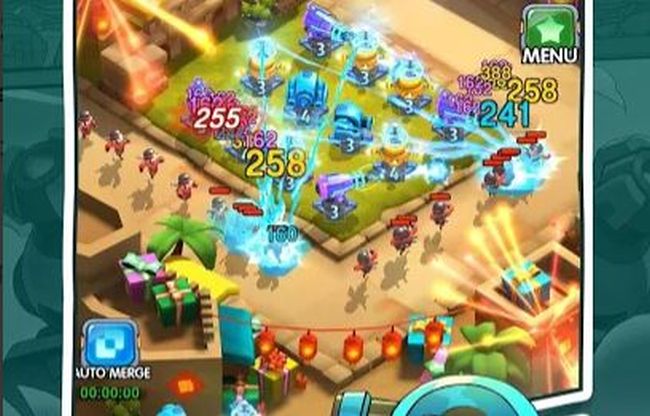 In today’s article we are going to dive into the Rooster Defense tips and cheats and help you build the best towers in order to pass more levels and defeat more minions!

This game kept me glued to my phone playing for hours (no kidding) and not just because it is super fun, but also because it is extremely addictive and it makes you want to merge more and more and always get better towers!

And if that is not enough, there is also some pretty cool graphics and stuff that make the game even more enjoyable for someone who just wants to lay back and casually play the game whenever it is convenient for them!

But enough praising of the game for now, you’ll see that for yourself! For now, let’s not waste another second and instead focus on the Rooster Defense tips and tricks to help you build stronger towers and defeat more minions!

Merge the towers on your board whenever possible

There are two possible placements for your towers: on your board and on the stage slots. You should always have the highest towers on your stage slots, so that you can have the most damage possible.

Merging towers (like crazy) is one way of how you can get stronger in the game and pass more stages, because the higher your towers are, the more damage they do. Sometimes for the boss stages you will need to have at least a certain level of towers, which you can approximately eyeball based on how much damage you do to the base + how much more damage you need to do.

This option is available on the left side of the screen, and once you activate it you will see that the towers which are of the same level and type will merge automatically on your board.

I prefer to always have this activated, because it ensures me that I don’t miss any two possible tower merges.You should always have it activated too, especially if you are playing quite a lot, or if you just logged back into the game and have a lot of Gold to spend.

Another good reason why this is important is because it will free up slots for you all the time, by merging all the towers that can be merged. The more slots it frees up for you, the more towers you can buy!

Place the towers at key spots

One really important thing in the game is going to be your tower placement. This matters because some of the towers deal more damage than others, while others are there mainly for crowd control.

The way that you place them is key, because depending on the spot, it can affect more area of a lane, or even more “lanes”. I would suggest that you place your highest damage dealer towers in every spot possible, while you have the crowd control towers at key areas, for example in “intersections” (where they can affect more lanes).

Try various tower placements and find the one that works best with how you have upgraded your towers. And one more thing worth mentioning here: don’t place your poison towers at the end – they should be always placed at the very beginning so that the poison has time to deal damage over time!

To make it all easier to understand (or in order words TLDR;), here is how you should place the towers:

– Toxic towers should be as close to the start as possible, never at the end.

– Gun towers should be placed wherever you have slots for DPS turrets.

– Ice towers should be placed in areas where they can affect as much of the lanes as possible (in the middle if you can).

– Bomb towers should be placed wherever you have empty slots, as they have a quite big range and they do AoE damage, so they are great for big crowds of enemies.

Since there are four towers in the game, it should’t be hard to learn what each of them does, even if you just read their names. Basically they work like this:

This tower does high DPS damage and they are a great way to take down bosses and normal monsters alike. Place them wherever you need an extra DPS tower.

This tower does DoT (damage over time) damage and you should always place them as close to the beginning of a level as possible, because that way the DoT has time to take effect. There is no point in placing the Tower Turrets close to the ending, because they won’t help you much.

They can inflict various crowd control on the enemies – the Gelatin inflicts slow, the Breezy also slows enemies down, and Frozen and Frosty freeze enemies making them unable to move. Select the one (or ones) which you like the most and place it (or them) in a spot where they can affect as many enemies as possible.

This one tower will shoot bombs at enemies and deal AoE damage to an area. Place them wherever you want, and depending on how many enemies there are you might need one or more of them!

Now about the part when it’s best to use certain towers, I have to tell you that it’s really up to you – you can either try to level your towers so you won’t even have to budge them for incoming enemies and bosses attacks, or you can build extra towers for single target and AoE depending on the stage.

You can switch between the tower whenever you want

This can help for the bosses stages especially, where you will not necessarily need all the Bomb towers. Then, you can just have some extra Gun towers which you can place instead of the Bomb towers as they have the highest DPS in game.

Basically this will take up some extra slots for the board, but it can prove super useful. It’s all entirely up to you how you prefer to approach this strategy!

Watch an ad for an extra card

After each boss stage you will receive a chest with various cards. I suggest that you watch an advertisement to receive 1 extra card each turn, because that will prove super useful if you want to make as many upgrades as possible!

You can only watch 5 advertisements per day, so that means 5 extra cards every single day! Make sure that you do that because it will be worth it.

Buy and open chests with goods

In the Shop there will be a few items that you should always try to obtain because they will help you pass more stages and upgrade your towers.

– Big Gem Chest: This option will let you watch an advertisement and it will reward you with 50 free Gems. That is super useful so make sure that you watch all 5 ads available every single day, because once every 2 days you’ll save up 500 Gems and with that you can buy a Premium Chest!

– Free Chest: This chest will be given to you if you watch an advertisement and it could contain up to purple items. You can watch 5 ads to receive 5 Free Chests every day.

– Classic Chest: This chest contains slightly better loot than the Free Chest, but it costs 200 Gems so it’s really not worth getting this when you can wait a little while longer and get the Premium Chest.

– Premium Chest: This is the chest that you should always try to obtain. As a f2p player you can buy one for free every 2 days, by just watching the ads that give you Big Gem Chests. From this Premium Chest you can receive Epic cards so it’s super useful and definitely worth the 500 Gems!

Activate the extra boosts all the time

There are two extra boosts in the game that you can activate for 1 hour and they will really give you some great rewards. Basically there is the ATK x2 buff which you can activate and will apply its effect even while you are offline, so make sure that you watch an ad to keep this activated all the time.

When you finished watching 5 ads, you can receive an extra 50 Gems from this! So really try to have it activated all the time.

The second one is the Gold earnings x2 buff which will help you receive more Gold when defeating minions. It can also be activated for an hour by watching an ad, and it will take effect even while you are offline. Just like the previous one, when you watch 5 ads you can claim an extra 50 Gems for free.

These would be all of our Rooster Defense tips and tricks that we have for you right now! Do you know some more useful game tips and strategies that you want to share with the rest of us? Feel free to drop them down in the comments section below!