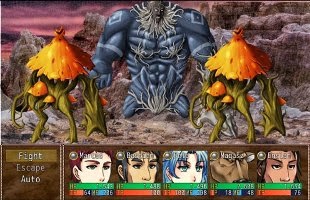 A new classic role playing game is going to be released next month on the App Store, a game that’s considered one of the best games developed using RPG Maker. We’re talking about Undefeated, developed by indie team Aldorlea Games.

Undefeated is as classic as a role playing game can get. The game is set in a world threatened by an expanding Wasteland. This expanding poisonous region has been kept at bay for years, allowing people to live their lives without fear. However, some time before the beginning of the game, the Wasteland starts expanding more than before, now posing a danger to all life on the planet. Following a chance encounter with a mutant wolf, Marcus, Bastien and Fela will start investigating the reasons behind the Wastelands expansion and bring an end to it.

The game’s battle system is also a traditional turn based system which allows players to issue commands to party members like attack with thr equipped weapon, use skills, magic and items and more. The in-battle graphics are especially good, with all monster sprites being incredibly details.

Having been developed with RPG Makes, Undefeated may look a bit generic but underneath its old school looks likes a solid classic role playing game that fans of the genre will surely enjoy.

Undefeated will be released on the App Store on October 3rd.