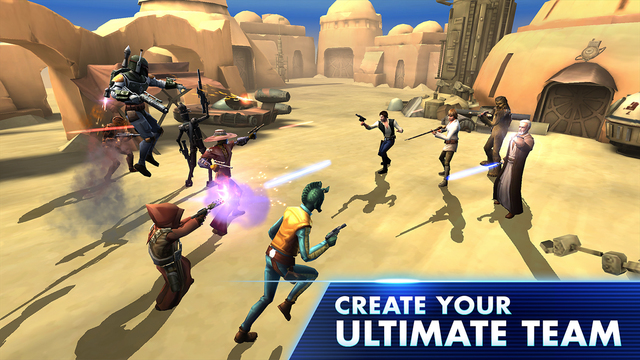 Star Wars Episode VII: The Force Awakens is now very close to release and we have seen plenty of Star Wars releases in the past few months, including a few new video games. Another one of these Star Wars games has been soft launched on the Australian App Store a few hours ago, a game that looks quite promising.

The new Star Wars game is called Star Wars: Galaxy of Heroes and it’s now available for download from the Australian App Store. The game is a free to play role playing game where players are able to control a lot of different characters, enhance them and fight enemies in several icon locations of the Star Wars universe such as Bespin, Tatooine, Coruscant, and more.

Even though the game doesn’t feel finished according to early reports, Star Wars: Galaxy of Heroes seems like a game that fans of Star Wars will surely enjoy thanks to the already mentioned locations and huge amount of characters. Even though Light and Dark Side characters cannot be part of the same party in Story Mode, it seems like it will be possible to make them fight on the same team in Challenges and PvP, giving players some freedom when creating their party for these modes.

Star Wars: Galaxy of Heroes is now available for download on the Australian App Store. We will keep you updated on the game as soon as more comes in on it so stay tuned for all the latest news.