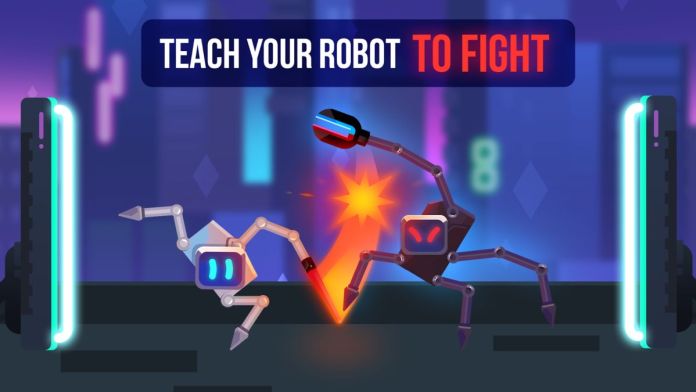 ZeptoLab launched the amazing Robotics! game on mobile, challenging us to build our own robots and send them into battle to crush the opponents. But since it’s up for us to teach them how to move and attack, the results will sometimes be hilarious – even though at some points frustratingly so.

But we’re here to help you get better at the game and teach you how to play Robotics: tips, cheats and a complete guide await below. You will learn the basics of the game and some more advanced techniques that will help you build the best robot ever and keep winning.

This game reminds us of CATS: Crash Arena (also by the same developer), but also the awesome SPORE game that allowed you to create your own little creatures. Really fun overall, but in the end it’s all about winning, so that’s what we’re here to discuss: how to do it.

So move on and check out our Robotics! mobile game guide, tips and tricks below!

One of the most frustrating things in the Robotics! game is that testing new weapons doesn’t have a dedicated room or anything… you just have to go live against a real opponent and see how the weapon does.

But you still have a bit of an option to test it – as well as test various builds and new customization in the robot’s editor menu itself. You should always do this to make sure you understand how your robot behaves and which are the best attack patterns.

In order to do this, simply go to the robot’s edit screen and customize it as you see fit. Then, drag the elements that you have equipped to see them move.

The problem here is that the robot won’t actually move – so you won’t see if it falls down, rolls over or whatnot, but at least you can get at least an idea of how it’s behaving. This is better than blindly getting into battle with a brand new robot.

Also, make sure that whenever you are testing a new robot design you get in the Junkard – or the lowest energy stage you have available. Usually, the lower energy stages are where you have opponents that are easier to defeat.

(This Robotics! Guide was published first on Touch Tap Play).

Open those boxes like your life depends on it!

The only way for you to level up and get better equipment in the game is by opening the dreaded loot boxes. You have to wait two hours for one to open, no matter the quality of the said box.

You can speed up the process of opening the boxes by watching ads, which is something you should do as often as possible: you can open a box by watching 4 consecutive ads, or at least reduce the waiting time by 30 minutes with each ad you watch.

I know that this is frustrating, but it is something that you should do especially early on when you start playing, in order to get the upper hand in battle and get the better weapons and items, as well as unlock new items for your robots faster.

Make sure that you always work on unlocking a new box – ideally starting a new one right before leaving the game for a longer period of time.

Melee vs. Ranged: which is best?

Choosing the starting weapon for your robot is more of a personal preference, adapting to your opponent’s design and how many times you have upgraded a specific weapon. You can’t really say that one is better than the other – it all depends on the situation.

With these in mind, my personal opinion is that ranged weapons are worse than melee ones. I didn’t really have a lot of luck creating a design to fully take advantage of the ranged weapons and, at the same time, it wasn’t too difficult to take out enemies with ranged weapons.

While they do deal a lot more damage than melee ones, they are a bit harder to master and control. And with the movement of the robots being chaotic at times and generally unpredictable, it is very difficult to properly use ranged weapons at the moment, in my opinion.

It is true, on some occasions I have been blasted into pieces by ranged weapons without standing a real chance, but more often than not I had no problem easily beating the ranged opponents. As a result, I would generally recommend using melee weapons.

How to build the perfect robot in Robots! by ZeptoLab

While leveling up will give you more and more options to build your robot, you will see that you don’t really have a ton of opions available, as in most cases random builds will end up with hilariously frustrating results and horrible defeats on your side.

One of the most important things to have in mind when building your robot is that it has to be able to stand. Many robots will just fall backwards, roll over and end up being pretty much useless. You don’t want that, you want stability. So always try to design a robot that can hold their ground.

The next important thing that you need to take into account is the level of the equipped item or, better said, the bonuses it offers. Always choose the ones that give your robot the best damage/health combo. You’re not going to a fashion show, you’re there to win battles, even if your robot’s ugly.

Finally, equally important is something that doesn’t really depend on design, but your own skill and understanding of the robot you have created. You have to teach it to walk flawlessly and attack like a winner. You usually have just a bit of time to set up its movement, so you must know what you’re doing.

Make sure that you instruct your robot to attack in the correct direction, taking advantage of the equipped weapon. Even more important, make sure that the steps it takes won’t turn it into a frog that will hop two times before going belly-up in front of the opponent. The way your robot moves is equally important – if not more so than the design itself and the combination of weapons and items used.

I usually prefer to go gung-ho in battle and attack the opponent relentlessly until they are blown into bits. This strategy goes well with melee weapons that deal constant damage, even if the damage per second is lower than that of other weapons.

The advantage of weapons that deal damage constantly is that even if you miss here and there, you still deal damage as soon as you touch the enemy. Other weapons might fire exactly when they are ill-positioned and deal no damage otherwise.

With melee, I usually go with a robot that’s heavy up front and crawls slowly toward the opponent. This way, I am sure that it won’t flip over and also I know that it will deal constant damage. This is the best approach that I had so far and I am using it without problems. Something like this:

When deciding the movement of the arm, you will generally have to create one that is wide and covers as much space as possible. This way, your robot’s arm will move constantly over the opponent and take them out quickly.

As I said, I haven’t played ranged robots too often and I can’t really claim that I have the best advice ever for it. However, there are a few things you should always consider in order to increase your chances of winning.

First of all, unlike what happens with melee robots, if you select ranged weapons, you should keep the distance. So I recommend setting your robot’s movement instructions to be backward, and not go forward toward the opponent. Or at least don’t move at all.

Also, I believe that contrary to what the game gives you by default, using a shorter arm with less movement is the way to go. A long arm with a wide movement will just result in you shooting anywhere but into the opponent, so you will lose precious bullets and damage opportunities.

This was the only approach that I had a bit of success with, but nowhere near as satisfactory as going full melee.

Switch designs based on the opponent you’re facing

Now comes the tricky part: the Robotics! mobile game chooses the winner on “two out of three” basis, meaning that you actually have to win twice against the same opponent in order to be declared victor.

This means that you might have to change your design on the go, depending on what the opponent is using, in order to stay ahead (or recover after a loss). Most opponents will do the same, changing the design they use after losing a fight.

You have to think quickly and know the strengths and weaknesses of each of your designs in order to choose the best one based on what the opponent is using. But don’t always rush to change your robot just if you lost first: if your loss was caused by a missed instruction on the robot’s movement and you are using your best design, it might be better to go with it once more instead of switching.

But if you have been blown to pieces easily, definitely try something new. And always keep an eye on what your opponent does, to be able to counter them.

Some people go as far as changing their design to a new one in the second round, no matter what. If you win, the opponent will almost surely change the design that they are using, most likely selecting something that they consider more suitable against your own design. So changing yours no matter what gives you an extra chance at surprising the opponent and taking them out, unprepared.

Fighting in Robotics! requires energy, which isn’t really easy to get and the more advanced the arena you fight in, the more energy you need to use. And on most occasions, it’s best to just fight in the most advanced arena you can afford because the rewards there are much better.

Only play in the lower energy arenas early on or when you want to try out new strategies and robot designs. Otherwise, go for the ones that require more energy because the loot boxes that you can earn from them are better and hold better rewards.

And always make sure to watch an ad after opening a loot box to double the earned coins – you will need a ton of those in the long run, so every extra bit helps.

These would be Touch Tap Play’s Robotics! tips and tricks for fellow players. If you have additional advice to share with the world, don’t hesitate to do so by commenting below!