Home Guides Road to Be King Cheats: Tips & Strategy to Get As Far... 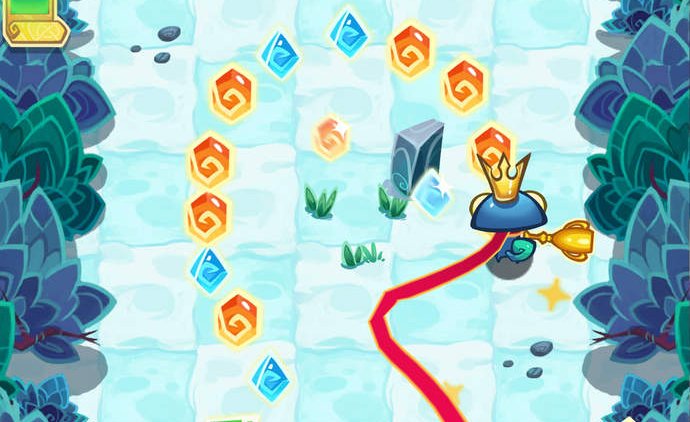 Road to Be King is a new endless runner that has just been launched for iOS-powered devices by Noodlecake and so far it’s pretty solid and fun, offering addictive gameplay and a real challenge. I am here to share with you a Road to Be King cheats and tips article, hopefully helping you get as far as possible in the game, reaching better distances and high scores, while at the same time knowing everything there is to know about the game. We’re also going to share a short gameplay video with you – we’re always recording them when we first start playing games, so it should be really fun.

So let’s not waste a single second and let’s check out below not just some Road to Be King tips and cheats, but also a short gameplay video for fans of the game!

1. Focus on avoiding obstacles
I know that your goals are to get higher scores and collect as many crystals as possible, but staying alive for as long as possible helps you achieve that easily. So make it your main goal to avoid the obstacles that take lives (like the big monsters or spiky boards) and get as far as possible. Automatically, your score will be better this way.

2. What bonuses to choose between levels?
You can make one of two choices and I would strongly suggest to go for the extra heart(s) if you get them and you have lost at least one. As I said before, getting as far as possible is your goal here and you can do it a lot easier if you have hearts. If you don’t need hearts or they are not available, try to get those that give you the biggest advantage in the long run (are always active), like the extra bonus you get from collecting crystals or the trophy that gives you more points when you destroy the small monsters.

3. Move forward and down
Don’t stay in the same position, always try to move, especially upwards and downwards. If you only move left and right, things are going to be a lot more difficult: instead, look at the paths of the monsters (see the dots that they will always follow) and try to quickly squeeze between them and get past them. Once you get past the points where the monsters are active, you are safe. So do quick maneuvers and you will be great!

4. Complete the achievements for goodies
Achievements are a great way to get not just some premium currency, but also goodies like new power-ups and items. So look at the achievements, see what is required from you and complete them to get better at Road to Be King.

5. Watch the free videos
If you are on a good run and you want to make it even better, take the option to watch a free video to keep on playing. Don’t overdo it though because you might run out of videos to watch exactly when you need to continue to get a super high score. So only use those when they count!

Now let’s take a short break and let’s check out a short Road to Be King gameplay video:

These would be, for now, our Road to Be King tips and tricks. If you have anything else to add, let us know by commenting below!