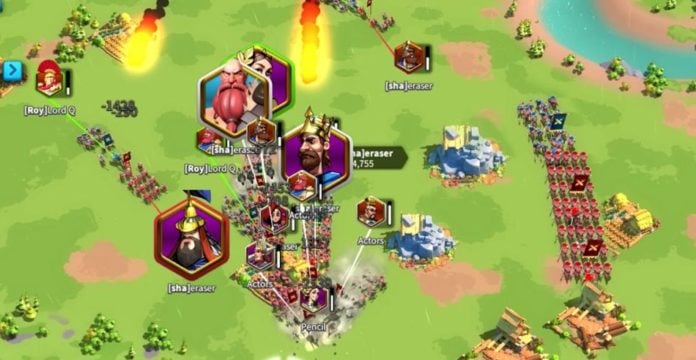 The game is absolutely beautiful and I am sure that all strategy game fans will fall in love with it as soon as they start playing. It mixes bits of classic strategy gaming with the modern approach of mobile strategy and some concepts from another of our favorite titles – DomiNations. The result is impressive.

You select one civilization to lead to victory and apparently you can’t change your decision. Even if in the future you will be allowed to change your civilization, it will probably cost a lot of premium currency, so it’s best to do it right from the beginning.

But what is the best civilization in Rise of Kingdoms? It’s difficult to know what the bonuses mean before starting the game – but you should worry not. We have played for you and made our decision – read on to find it out!

First, in our quest to deciding what nation to choose as your own, let’s check them all out below! 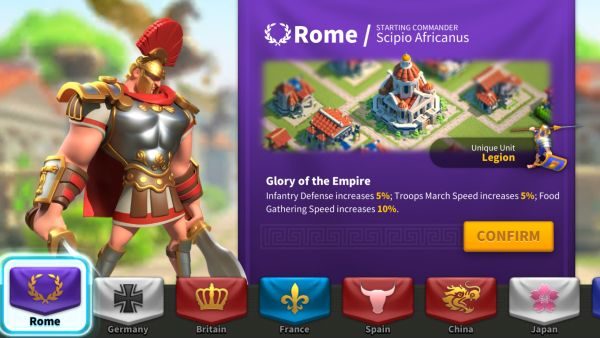 Main bonuses: Infantry defense increases 5%. Troops March Speed increases 5%. Food Gathering Speed increases 10%.
Starting commander: Scipio Africanus
Unique Unit: Legion
Opinion: Faster than others, this is a good civilization for those looking to attack a lot and be very active in the game. However, the speed bonuses are not that amazing in the long run. 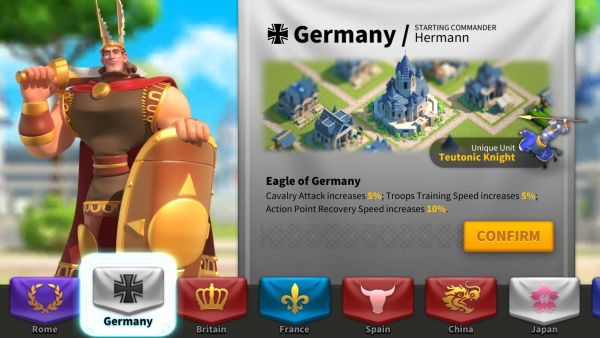 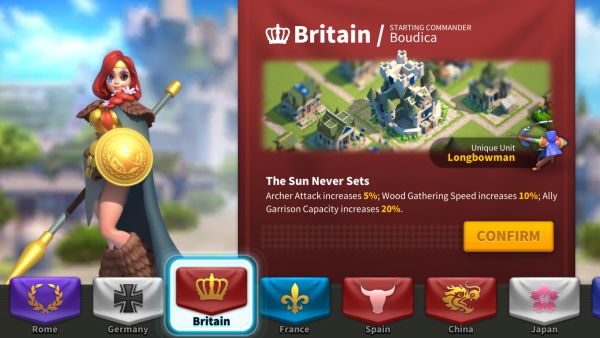 Main bonuses: Archer attack increases 5%. Wood gathering speed increases 10%. Ally Garrison capacity increases 20%.
Starting commander: Boudica
Unique Unit: Longbowman
Opinion: The main advantage is that you can get a lot more allies to join your armies but unless you’re in a really good Alliance, that bonus can get close to zero. Wood gathering is useless, while the archer’s attack bonus is a good thing to have. 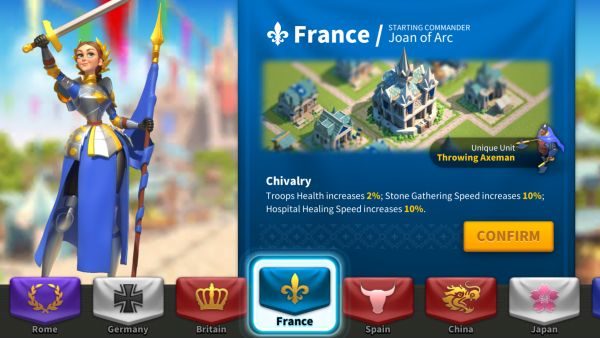 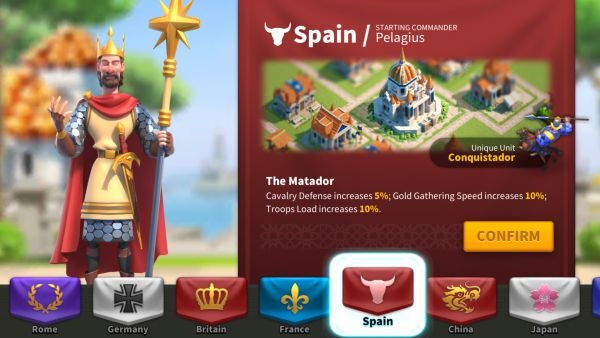 Main bonuses: Cavalry Defense increases 5%. Gold gathering speed increases 10%. Troops load increases 10%
Starting commander: Pelagius
Unique Unit: Conquistador
Opinion: This is a good nation for those looking to farm a lot, including gold. Although I believe that resource gathering boosts are useless, this civilization is actually good for the player with a farming strategy that wants to focus on growing, but not so much on attacking. 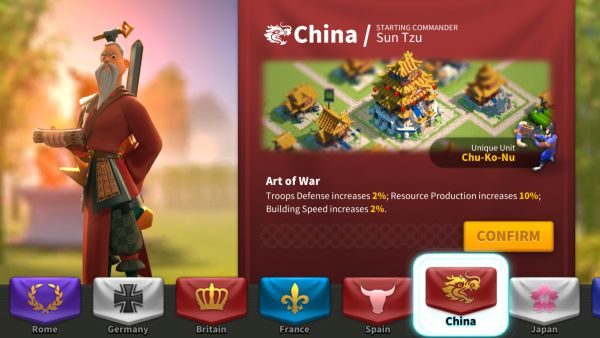 Main bonuses: Troops defense increases 2%. Resource Production increases 10%. Building speed increases 2%.
Starting commander: Sun Tzu
Unique Unit: Chu-Ko-Nu
Opinion: A good defensive civilization, China can grow a bit faster than others thanks to its increased resource production and building speed. However, these bonuses are easily shadowed by being active and you end up with only the small defense boost in the end. So not really the best deal. 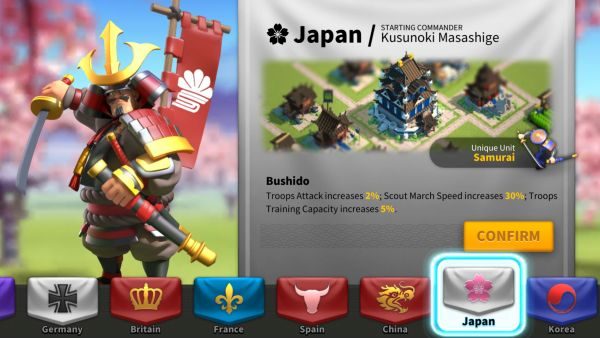 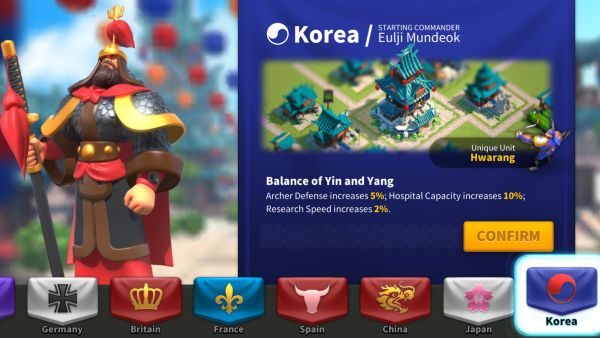 Main bonuses: Archer Defense increase 5%. Hospital capacity increase 10%. Research speed increases 2%.
Starting commander: Eulji Mundeok
Unique Unit: Hwarang
Opinion: Not really the best trio of bonuses, but at least it becomes a bit more useful in the later stages where you might end up saving more of your troops than you would with other civilizations. But overall I consider these some of the worst bonuses in the game.

Now I know that everybody is tempted to choose their own nation as the one to lead to victory in the game, but when it comes to mobile strategy titles, that might not be the best option. And although all the civilizations are pretty good in my opinion and the choice wouldn’t completely turn around the fate of the game, it’s best to start with a strong civilization.

So… what’s the best nation to choose in Rise of Kingdoms?
Germany is the winner in my opinion. It’s a great nation for active players who can regenerate action points faster and therefore perform more actions in the world map. The troop training boost also ensures that you get your units ready for battle faster, therefore building your large armies faster. The cavalry attack bonus is not that useful in the long run, but it’s still better than many others.

So all in all, I think that Germany is a great choice for a powerful nation from the beginning of the game to the later, more advanced ages. And even though the unique unit only arrives in the end-game parts (probably all do?), it’s still worth going German in Rise of Kingdoms for mobile!

Second placed?
Another good nation to play with is Japan, in my opinion. Being able to train a lot more units at once and having a 2% attack bonus for all troops really adds up especially in the later stages of the game and despite the fact that the scout’s marching speed becomes useless eventually, it helps this nation progress faster and build a super solid army faster than most other civilizations, if not all. A really good choice as well!

What do you think though? What’s the best civilization in the game, in your opinion and why? 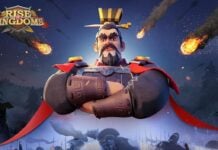 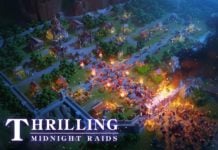 Rise of Civilizations Is an Epic Strategy MMO for Mobile 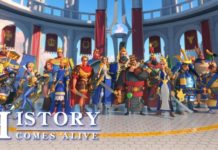 Rise of Kingdoms Commanders Guide & Best Commander in the Game