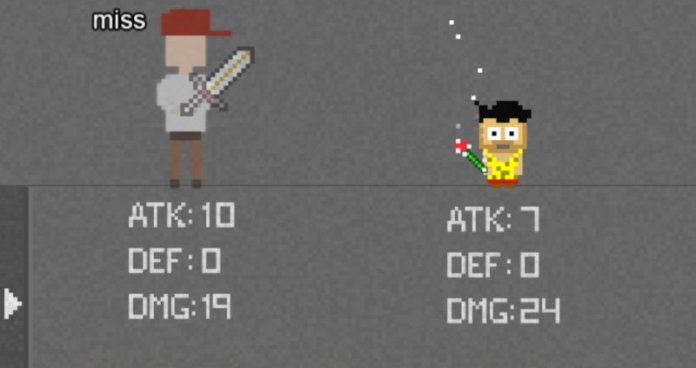 When you first hear that there’s a game available exclusively on iOS and its title is Ridiculous RPG, you raise an eyebrow. Then, because you’re curious, go head over to iTunes to check it out, only to realize that its full title is: Ridiculous RPG – Boy Hurry to School – AN EPIC 8BIT SUPER UGLY ADDICTIVE GAME. Now you are probably intrigued and simply have to try out this game.

The first thing that is obvious as soon as you start playing Ridiculous RPG is the fact that it is indeed ugly and the developer wasn’t actually trying to be funny. Ugly in an 8-BIT way, though, so the fans of everything retro will feel like home here. And really it’s not just the looks that make a game great and this is exactly what Ridiculous RPG proves.

Created by a single person – Jerry Lee – after more than 1,000 hours, this game does have some depth that you wouldn’t expect from a one man team title. You play as Boy, a good friend of Kid (yes, all the characters have similar names) and you need to find out the dark story behind your magic pen. This means that you have to explore dungeons and battle all sorts of creatures, increase your skills and become the greatest boy hero of all times.

You control your character by using the arrow icons at the bottom in your quest to hurry to school, with the term “hurry” becoming relative in the game because you’ll fight all the monsters on earth along the way. Every now and then you will have to enter a dungeon to retrieve an object by defeating a boss and random encounters with various types of monsters happen as you explore your way through the maze-like dungeons.

Combat is really fun: you take turns at hitting your enemy and you select your attacks based on random cards that appear in the bottom bar. You can only select 2 cards to use at once and they are either attack or defense cards, magic cards or special ones. You can combine them as you see fit and there’s a lot in place here in terms of strategy and tactical thinking, despite the extremely simple and straightforward mechanism. So all in all, combat is extremely rewarding and even though repetitive and with few major changes (the introduction of new special card being the most fun part after a while), it still keeps you busy and motivated to keep on going.

Being an RPG game, Ridiculous RPG also comes with a complete set of skills to upgrade and items to use in battle. Although the skills are pretty nicely divided and varied, the same cannot be said about the items: you only have health potions to use. There is also no loot and character progression is automatically decided when you level up so you don’t really have the level of control you might want on character development. However, the automated process doesn’t fail and creates a character solid enough to withstand the attacks of all the enemies he will encounter.

Probably one of the biggest problems of the game is the story. Not necessary the story itself, as it is ridiculous as advertised, but the storytelling. As the developer himself admits, he is not a native English speaker and that is pretty obvious in the translation. However, as I am not a native English speaker either, I must team up with the man here and give him credit for creating an otherwise complex and rewarding experience.

In his message for the players, the developer says that he only sold 2 copies of this game. Hopefully this review proves you that you really have to buy it as it is fun. Not perfect, not the game of the year, but clearly a game that should be played by thousands, not by a couple. So really, give it a try – it is more addicting than it looks!